The ritual of discord begins
When Ira closed the door behind him and looked into the direction of the village square, he couldn’t believe what he was seeing. And rightfully so, as the sight was a mystical one.

No clouds hung in the sky and, irritatingly, no stars were to be seen either, which one would have expected. Only the Blue Moon dyed the world into, as the name already suggests, blue-ish light. The only other source of light was the torchlight parade on the village square. Dark, burning black flames. Which emitted light, but at the same time, swallowed the light of the Blue Moon. It was a magical game of shadows and light.

Technically, this sight wasn’t new to Ira, he had seen it often enough. But it was something else entirely if it was happening to oneself for the first time now and one had only experienced the other side of it before. With a mixture of anticipation, fear of rejection, curiosity and awe, Ira took his first step towards the square. Mireska took his hand, sensing the burden that lay on Ira, the outsider.

With every step they got closer to the square and the drums grew louder. They could hear the conversations of the other villagers. Nobody looked at Ira longer than necessary. Conversations were replaced by pulling mouths and open rejection.

To Ira, they were humans born with malevolence. Their fear of change and the other was always mirrored in repulsion and hate. A shame, because it always lead to new tragedies in our world. At the same time, only because of this could the heroic stories in the scrolls be born, which distracted me from the sadness of my own existence for a little while. Now, let’s let that thought go and return to the notes.

Because Ira was standing a little off to the side, he could barely see into the centre of the square. It was paved with decorated sandstone and no villagers got close. Only one person stood in the centre: the village elder, who was also responsible for the execution of the ritual. One could hear how she was trying to make herself heard over the villagers’ murmurs. “We have today ... We have ...” She cleared her throat and quickly realised that she would not catch the attention of the crowd with mere words. The Old Hag took a deep breath and let her voice ring out over the square as if she were barely twenty moons old. “SILENCE!”

It worked. Everything went quiet. She used that moment to commence the ritual:

“We have come together this evening under the Blue Moon to honour our youngest as has been our tradition for centuries. It is dangerous. But those with real courage will not be deterred. They will experience the blue baptism and return to our community as full members. May we now continue and ...” 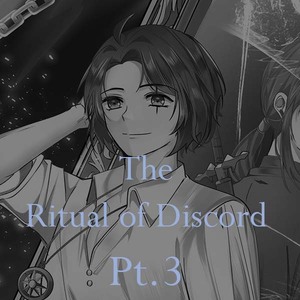