“You look like you want to say something interesting.” Her grimace contorted further, making any and all pieces of humanity disappear, as if she were malice incarnated. “Shall I help you up?” With those words, the pressure on Kyle and some villagers vanished.

Kyle fought against the urge to vomit and got to his feet with difficulty. Anger rose in him, which found its origin in his hate towards magic and his own inability to pass the test. But even though he tried to roar like a lion, his appearance had more in common with a mouse, which had been pushed into a corner by a hungry cat.

I could understand his anger, when your own desire for power or magic was turned into the opposite, or seemed unattainable, and there were thus mightier creatures than oneself in his little, controllable universe.

“The ritual is completely bullshit, grandma! Look at me!” he yelled and turned to the villagers, presenting his back to the Old Hag. “I’m a hunter! And only real men hunt! Men are made by having the blood of a freshly killed boar run down their backs and not through some crazy ritual!” He spat onto the floor. The Old Hag was not impressed. More an overwhelming shadow, she spoke with words as sharp as freshly sharpened spear tips. “Could it be, Kyle, you’re afraid? Afraid of failing your last test? Death is nothing to be scared of.” She turned around and her words lost their sharpness, but not their sheer power to tear apart a soul with a dull blade. “Well - as long as one does not turn into a shadow.”

She teased his true fear, which only further fuelled his anger. Kyle created more space for himself by widening his stance and screamed: “I said, you should shut up, grandma. And stop with your - old wives’ tale! Just because you can wield a little magic, you think everything and everyone is afraid of you.” He wiped some beads of sweat from his forehead, but didn’t stop. “But believe me, when I put that silly ritual behind me and I’ve proven to an old hag like you, that I’m a man,” a tense smile appeared on his face. “Then I will find a way to unmask you and your lies and chase you away!”

Silence. Even the flames seemed to dance less in the wind, as if they were waiting for the Old Hag’s reaction. Kyle swallowed. Had he gone too far? Had his blind anger maybe cost him his life? The silence and the rigid Old Hag made his body send him one and the same signal over and over: Flight.

Then the Old Hag slowly lifted her right arm. Kyle took a step back. Even Ira turned away, he didn’t want to see what would happen next. Many villagers did the same. For the first time, they were in agreement. The Old Hag’s movement grew faster and reached her forehead, accompanied by loud and hearty laughter.

Nobody had expected this reaction. 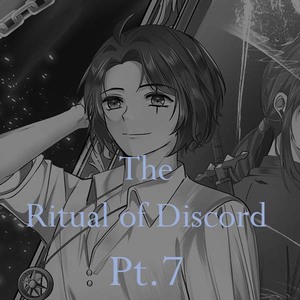