“Ira,” he heard somebody call from the other side of the ritual square. It was the Old Hag’s voice, which pulled him from his thoughts and silenced the murmur. “This is where the action is.” Again, a distorted laugh accompanied the otherwise serious words of the hag. “Nobody in your dreams, not even Roderick, can tell you how tainted you are.”

Ira looked confused. He hadn’t ... Yes, he had. A tear sprung up from his right eye and slowly rolled down his cheekbone, ready to dare the jump from his chin towards the earth. The despair inside him, which he tried so hard to lock away, pushed outwards on its own. With his emotions numbed so much that he didn’t realise how his body acted and reacted.

Ira stopped the tear halfway with his left index finger, wiped it towards his lips. Not more. He hesitated. Understood, maybe for the first time, the true extent of the cracks already on his mind.

Had his head been bowed just now, he suddenly raised it towards the sky. But not of his own volition. It was her. The person, who made herself noticeable with another mocking laugh. The Old Hag.

“I said, the action is over here, Ira. You want to answer, don’t you? Then come over here,” she stretched out her right arm, turned her hand with the palm up and made an inviting gesture with index and middle fingers. Every time her fingertips touched her palm, Ira skiddered a few inches closer. As if an invisible wall behind him would tirelessly push him forward.

“The ritual, Ira.” The Old Hag chose her words with treacherous care. “It has the power to tell you how tainted you really are. Are you ready to take the test and prove to everyone that you belong to us?”

Ira, who understandably felt a bit bossed around, hesitantly replied: “Uh, yes. I am. Shall I sit down here?”

The Old Hag waved Ira’s words away and with that movement, the tension that had pulled Ira forwards, vanished, too. “Oh child. You’ve seen it often enough. Sit down.”

He did as asked and cautiously sat down in the middle of the circle. His inner turmoil turned to anxiety.

But then he noticed something that let him breathe freely for a second. Had Mireska searched for his gaze? Comforted him? No. It was, as obscene as it might sound, because of the Old Hag. Despite her power, her strength, yes, despite her magic, she looked nervous as well. In her gaze Ira saw something he had wished for since he could feel. Worry. Not the kind of worry that some stranger would climb into one’s house as soon as one forgot to lock the door. No, it was the kind of worry that came from the safety of family. She was concerned for Ira. 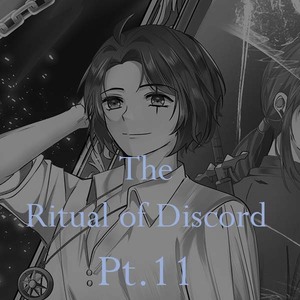