Even the movements with which the Old Hag now touched Ira seemed different than with all the rituals he had seen. She did not start in the usual way with her magical words, but with her hands. Gently, she stroked her fingers over Ira’s face, put her thumbs onto his temples. Only then did she recite the incantation:

The Old Hag’s words were completely foreign to Ira. And yet, their meaning resounded in his ears, together with an unusual feeling of trust:

“By the demons of old. Called by the goddess of the river and the sea. I ask you, show this soul the right path, so it may defy all future perils. By his father, the demon, who protected this village with his heroism, and his mother, who had been our village’s gentleness, protect him in darkest times and yawing danger. Water, Earth, Air and Thunder. Grass, animal, land and sea. Open now the portal to the ritual of discord. Split the soul from its body and send it out, so it may mature in the face of the challenges against itself. Hiraku!”

A long, too high for his normal voice, scream escaped Ira as he fell into endless depths. Nobody heard his scream, but everybody who had gone through the ritual knew it. It was the scream of the soul, that had been forced into introspection to build a space. It went against all wishes of the gods; it went against Eden and it was the fear of their anger that made the soul howl louder than the contortion ever could.

Even I am trembling at the sacrilegious deed of the Old Hag. So much I almost forgot to write down the witch’s important words. But I, too, will support them.

After all, you are searching for the place I myself can never find. 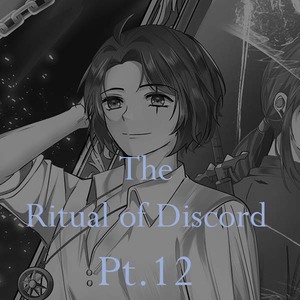