"Do you think you could do better?"

Kai looked around, not sure where the voice had come from. There was nothing around him, just pitch black. Not the best thing to wake up to.

"Who's there?” He asked. The darkness in front of him shifted and folded around a figure. A cloaked man emerged. Kai squinted, trying to make out more. As he watched, tan skin, red hair, and a fanged grin appeared. Golden eyes glinted as they looked him up and down from beneath thick eyebrows. Already the man was way taller than him, at least eight feet and broad-shouldered, wearing a loose shirt, black pants, and boots. A blue coat with gold buttons and embroidery dangled off his shoulders. His mother would have called the stranger ‘handsomely ruffled’. Kai thought he looked more like the magazine covers that tried to convince you the male models had ever been within ten miles of a rugged environment.

“Nice to meet you, kid.” The man smirked. “You’re different from what I expected,” he said before cocking his head. “Quite weak. Like a mouse.”

“No need to get defensive, sweetheart, just stating the obvious.” The tall man waved his hand, summoning a phone. Kai’s phone. Without entering a passcode, the home screen lit up.

“I know.” The man didn’t even look up from his scrolling.

“Then give it back!” He reached for it, but the man ignored him.

“This,” he said, shoving the phone in Kai’s face. An ebook app was open on the screen. The first page of a novel pulled up and waiting to be read. Kai shrugged.

“Do you think you could do it better?”

The man sighed. “What do you remember from before you got here?”

Kai paused. There was the obvious; he remembered his name, where he was from. He knew what year it was and who was president. But, what happened before he came here? Where was here?

There was nothing to give him a hint. No features of a landscape stuck out, just stuffy, oppressive darkness, broken only by himself and the man in front of him. How had he gotten here?

“Where am I?” he asked. The red-head just stared at him with a bored expression.

Like they’d been summoned, memories started to flit before his eyes.

“I was leaving the fight,” Kai gasped, clutching his head. “The bus…” Pain lanced through his arms like they were remembering the pain of being crushed. The boxing match, Jace winning, Kai slumping into seat 14 on the bus to go home, once again not confronting his brother. He’d been sitting with his phone in hand, trying to drum up the interest to read. Then the bright headlights of an eighteen-wheeler headed straight for them.

“Did I die?” He looked down at his hands. They were see-through. “Shit, am I actually dead?”

The man’s grin spread across his face once more.

“Let’s say you fell into a fold instead.”

The man sighed, using Kai’s phone to tap his chin. “This is why I don’t like dealing with humans.” He hummed. “Like a fold in reality. You aren’t dead but you got pretty damn close. Your soul is definitely not where it’s supposed to be, Mouse.”

Kai blanched. Beyond having it confirmed that souls existed, apparently, his was absent from his body? That couldn’t be good. The man continued on like he didn’t notice Kai was very not okay with that information.

“Anyway, this -” he shoved the phone in Kai’s face again- “I need you to take care of a little something regarding this.” Kai crossed his eyes to try and read the title of the web novel being thrust under his nose. Unfortunately, it was one he was very familiar with.

The Princess Climbs the Stairs. Despite the unimaginative title, it was a well-written novel about a disgraced princess reclaiming her throne with the help of her loyal assistant Xander. Unfortunately, some of her allies betray her and end up using her son against her, turning him into a villain who wants to destroy the kingdom she worked so hard to reclaim. The novel was a tragedy on par with ‘Romeo and Juliet’. No matter how hard the princess tried, she’d never get the happy ending she deserved. Morbid as it was, it was Kai’s favorite novel.

What did this guy want him to do about a novel? Read it aloud? After a few moments of staring blankly at the phone, the red-head sighed.

“I had to get one of the slow ones,” he said before wandering off. “Pay attention.” With a snap of his fingers, the darkness parted. Lines of blue spread. Kai was forced to squint at the bright attack on his retinas. When he could finally open his eyes again, he nearly had his second heart attack of the day.

“Why the fuck are we in the sky!” he shrieked, arms flailing.

“Be quiet, you won’t fall.” The red-head was leaning back in mid-air, obnoxiously calm in the face of Kai’s panic.

“Easy for you to say, jackass,” Kai snapped. It was true though, no matter how he shifted or flailed, he remained hovering over what looked like a forest.

“My name is Keirien, not ‘jackass’. And I’m a god.” He looked at Kai expectantly, one brow raised. “And you?”

Keirien sniffed. “You should show me more respect, Kai. I’m about to help you save your life.” He snapped and they began moving, trees flowing into a blur beneath their feet. Kai gasped in awe at the speed they were going, rivers and animals flashing past in an instant.

“This,” the god said when they finally pulled to a stop, “is where the princess is currently living.”

“The princess in the story on your device, this is where she’s staying.”

Kai looked down. The estate was the definition of run down. Vines were crawling up the walls and fences were down around the perimeter. The blue roof was missing various tiles. The gardens were overgrown and unmaintained. It looked just how the author had described it…

Slowly, a realization started to dawn on him. No, no, no, that couldn’t be right. There was no way. He looked to the right to where the gate was located. Two stone pillars topped with gold swans guarded the entrance, the only clean and well-kept area of the estate. Beneath the pillars was a green iron filigree gate with a seal in the center. A swan with a crescent moon holding a lily in its beak was worked into the middle of the gates. He knew that seal.

“I’m in the novel,” Kai breathed, too shocked to do anything but gape. “I’m actually in the novel.”

“I had a feeling you hadn’t figured that out yet,” Keirien hummed, now laying on his stomach, his chin resting on one hand.

“How?” He jolted back when the god vanished and reappeared right next to him.

“You ever hear the phrase ‘All stories are real’?”

“Well, it’s true.” Keirien snapped his fingers and a cigarette appeared between them, already lit and trailing bluish, herb-scented smoke. He inhaled through the thin tube and blew the smoke out in a perfect ring. “Think of Time and Reality like a cloth. All stories exist in folds of that cloth, the authors that write them down are usually people who can see glimpses through the fabric. Moments of conflict tend to thin the veil between worlds even more. Maybe not everything in the story is true; but the place, the people, the struggle? Those are usually pretty correct.”

“So,” Kai said, glancing around. “This is really the world of The Princess Climbs The Stairs?” Keirien wrinkled his nose.

“Is that what they called it?” Before Kai could respond the god flicked his hand dismissing any answer. “Nevermind. Yes, this is that world. And you’re going to go down there and help my girl get her kingdom back.”

“What?” Kai was starting to get even more confused. As was becoming his habit, Keirien ignored him.

“You have five years,” he said, nodding decisively. “And don’t worry about Xander, he won’t be showing up to do a piss-poor job this time around. We’re taking it from the top.”

“It took Xander ten years in the original novel, but you expect me to do it in five?” Kai asked, annoyed that the god was pushing this job onto him without explaining anything. “Anyway, why should I help you at all?” He raised his brows. “It’s not like this is my world.”

Keirien looked at him blankly, like he was confused that Kai would object to his not-at-all-reasonable idea. Smoke continued to trail from his forgotten cigarette. Slowly, he tilted his head, a feral grin spreading.

“Looks like the little mouse hasn’t quite figured out how things work here.” He took another puff on his cigarette, the tip glowing an ominous cherry-red, he left the tube dangling between his teeth as he stalked towards Keirien.

“Listen, Mouse,” he growled. “I wasn’t asking you. I was telling you.” He gripped Kai’s chin between his fingers. Smoke, more than there should have been, trailed out of his nostrils and made Kai’s eyes water.

“If you don’t fix this,” Keirien began, tone threatening and manic smile still in place. “I’ll throw your mostly-dead ass back into the oblivion I pulled you from. Your spirit will wither and drift aimlessly between realms until another cosmic deity takes it upon themselves to eat you and shit you out into some other reality field.”

His eyes blazed the same cherry-gold as the tip of the cigarette that was bobbing dangerously close to Kai’s skin with every word the god spoke. He was suddenly reminded of those moments in nature documentaries, the ones right before a lion pounced on its prey. The grin spread impossibly wider.

“It could take millennia,” Keirien whispered cheerfully. “And I can guarantee that you’ll never make it back to the place you call home, not with your mind intact, that is.” He bopped Kai on the nose. “Understand, Mouse?”

"It's a deal then," Keirien said gleefully.

What had Kai gotten himself into? 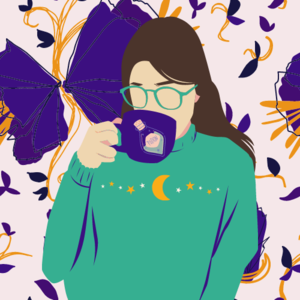 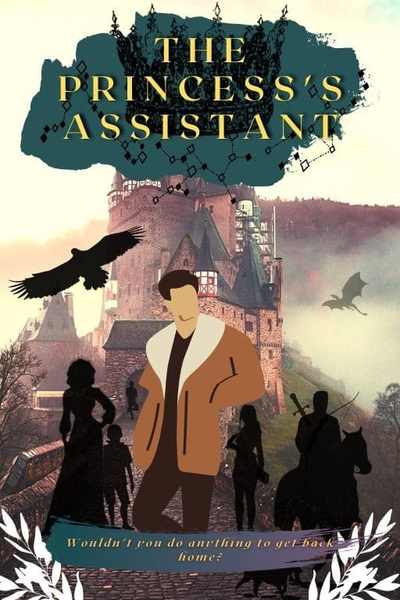 When Gods gamble, things can get a little complicated.

Kai spent years working minimum wage jobs to support himself and his brother after their mom died, now they aren't even speaking. Kai keeps an eye out for his brother from a distance, but fate has different plans. One night a drunk driver ends Kai's hopes of making amends. Instead, he wakes up in his favorite novel. A dramatic tragedy called 'The Princess Climbs the Stairs'.

Enter Kierien, the crafty God willing to send him back, but only if he completes a task. Kierien needs Kai to change the book's ending by taking the place of one of the protagonists. Here's the catch, he only has five years to do it or Kierien won't send him back.

Armed with a copy of the novel and a determination to get home without dying in the process, Kai fends off scheming kings, charming bandits, a depressed dragon, and a chatty bird. All in order to place the main character, disgraced Princess Ceana Anaique De Bris, back on her throne and reunited with her son.

It'll be hard, but he's determined to turn this tragedy into a Happily Ever After.
"I am the Princess's assistant after all." 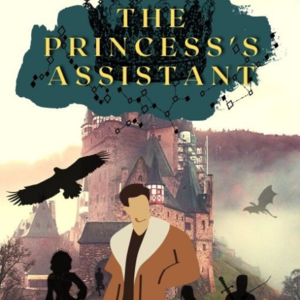