Lilinova woke up the next morning with the sudden realization that if she didn’t manage to change destiny, she was waking up on one of the last two days of her life.

This manifested itself in her running to her armoire for a dress, finding only minstrel’s clothing, panicking about clothes, taking a calming reassuring breath, then panicking about her true identity, and only then noticing a few dresses in the back she could wear.

Lili had nowhere to point her gratitude for dresses cut for walking and dancing and horseback riding, since she wasn’t quite sure where to find Sybella when they weren’t dining together. Lilinova’s own wardrobe in Tresterville featured layers and stockings, pinchy shoes and tight collars, but Neilsland seemed to have realized that women wanted to breathe, too. Dresses were cut down by the collarbones in an elegant V and hung a little past her knee instead of dragging on the floor, the textiles muted—but not drab—reds and greens. Neilsland also featured women’s shoes made of soft material, not meant simply for riding or display, but for a variety of purposes. In Tresterville, Lili’s pinchy shoes served a purpose; in Neilsland the shoes were meant to serve her.

Lili made her way out of her room in total comfort with her skirts swishing around her. She only had to be pointed in the right direction twice before she ended up in the kitchens for breakfast, where she gratefully accepted a small basket of “breakfast pastry” without asking what that exactly meant, and then made her way to the gardens to eat.

Whatever breakfast was, Lili ate all of it with gusto. Another thing Neilsland seemed to get right: the ratio of flaky pastry to egg and cheese.

Which left her the rest of the day to do…things.

Things that would help save herself and Tresterville.

She went to explore the grounds. Strategically.

Lili ended up wandering the castle grounds for the entire morning, enjoying the massive flowering shrubs, well-trimmed hedges, cutting garden, herb bed, and various water features. She smiled at gardeners, curtsied to anyone who looked important, and swished her comfortable, breathable skirts as she enjoyed the morning air.

She did a full loop around the castle.

Okay. Time to save Tresterville.

Or not. Lili stopped by the stables to check in with Rob. The stable hand cheerily gave her a full and thorough report on him that she barely understood, and was delighted when she told him Rob’s name. He introduced her at that point to the rest of the horses: Storm, Midnight, Dusty, Hammerhead, and Mountain Rose.

Lili asked which was the Duke’s horse and found, to the shock of noone, that his horse was Midnight.

All told, the stable visit took up another hour. Lilinova of Tresterville needed to get her act together! At the rate she was going, she would be dead in two days and her second lease on life would have been meaningless!

Lili went back to the castle.

She explored the northern half first, with its long hallways of portraiture, floor to ceiling windows, sculpture gallery, and glorious crown moulding. A few castle staff watched her curiously as she walked by, but didn’t seem to mind her presence at all.

Neilsland Castle would be a great place to be a spy. Unfortunately, Lili would make a truly lousy spy.

The real problem was that Lilinova had never been so free in her whole life.

Lili was headed toward her room, dragging her feet the whole way, when Amedeo’s rough voice burst from under a parlor door, freezing Lili in place.

“—that’s what he wants us to do!” Something solid banged the wall between Lili and the argument going on, and was swiftly followed by the Duke’s quiet but strong voice.

“He doesn’t know we know, Amedeo. If he did, he would have acted already. We need to be ready. There isn’t much time before the invasion.”

Invasion?! Lili hadn’t…technically…actually imagined she’d be dealing with the invasion. She’d hoped to talk the Dark Duke out of it. Maybe make it sound like a really bad idea…?

Lili plastered herself to the wall and tried to look inconspicuous while getting as much of her ear pressed to the wallpaper as possible.

“If we move in three days, we can be ready,” the Duke went on. Three days sounded ominously familiar.

“We have the manpower to stand against Scarfone.” The Duke scoffed, or Lili imagined he did. She could only hear his stern words, his expressions were lost behind the door, but his tone painted a picture of him sitting calmly in a chair, ankles crossed, long legs out in front of him. He didn’t sound worried at all! And why would he be when he was launching a sneak attack on her country!?

Not…that her father didn’t know he was coming.

Not that her father had done anything about it despite his years of talk. Her father had made it clear that one day Neilsland and its Dark Duke would be coming for Tresterville, and yet when it happened, he had been unprepared!

“With our current military might, we will crush Scarfone and all his miserable forces.” The Duke was closer now, maybe right by the door. She imagined him reassuring Amedeo with a companionable pat of the shoulder as he headed to the door to throw them open and spot her immediately

Lili fled, trying not to make too much noise in the hall. She had to find a way to talk the Duke out of attacking her people. No more procrastinating.

If her father wasn’t going to save Tresterville, then Lili would. With her extensive skill set.

Lili was alone, in enemy territory, wearing loaned clothes, and with only a very sweet teenager and an apathetic horse as her allies.

Regardless, Lili couldn’t do nothing.

No matter how hard she tried.

Have you been procrastinating on something important? 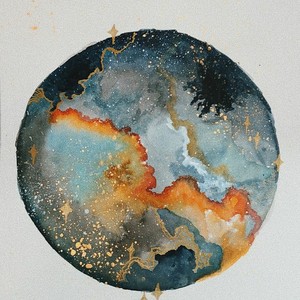 I'm currently procrastinating taking a shower after work and eating dinner by reading this.