Yellow Is The Color Of Happiness

The bus was old but well kept. The leather of the seats- which was yellow- was just barely starting to pull at the seams and the metal of the walls was clearly cared for delicately, almost as if it were some old artwork in a museum. The outside of the bus was a sunny yellow, just barely warm in tone so that it didn’t hurt your eyes when you looked at it. The bus driver was wearing a yellow suit and tie, a black hat, and brown leather shoes. He was the only other person on the bus besides Mr. Henry Trill.

Mr. Trill was young, fresh out of college and looking for a new place to live. He had grown up in the city and was tired of it. The loud noises, the loud people, the bright lights, the cluttered streets… all of it. And so he packed up his things and got on a bus and started heading west, unsure of when he would get off, and unsure of what he would do when he did. He had almost no money to his name, no work experience, and no back up plan.

He had been on the bus for several hours, and in that time the towering buildings and the neighborhoods had fallen out of view. He was glad to have left early in the morning, it left him time to explore once the bus finally stopped. When he had gotten on the bus he had told the driver he would be getting off at the last stop and the bus driver had smiled and said the name of somewhere- he could not remember what the name had been. Mr.Trill just remembered giving a confident nod before heading to a seat on the left of the aisle.

The fields around them were empty, nothing but green grass and the occasional tree. The road they were on was thin and smooth, it looked to be brand new, and there wasn’t a speck of dirt on it, nor any weeds growing at the sides. Ahead he could see the faint shapes of buildings. Short, quiet looking buildings. Far off to the right was a yellow building he guessed was a farm, and near that farm were dark shapes moving around- horses maybe. Mr. Trill brought his single bag up onto his lap in anticipation for the stop.

When they did finally get there the bus driver waved happily at the people, and they smiled and waved back. He stood and beckoned Mr. Trill towards the front and opened the door. He slung his bag over his shoulder, put his hat on his head, and thanked the bus driver. The bus driver shook his hand, told him good luck and waved him off.

The town was odd. Mr. Trill looked around, taking the place in. The buildings were no bigger than two stories tall- except for a tall clock tower- and they were all yellow. The same color the bus had been. Everything was all so pristine, like it had been drawn into existence. The bushes were all perfectly round, and spaced evenly apart, and growing from them were tiny bunches of yellow flowers. The trees were all the same in height, the branches never stretching further than a few feet out, and from them were growing golden delicious apples, rainier cherries, and lemons. The streets were cobbled, the fences were white and picketed, and the parts of the buildings that weren’t yellow were white and made from brick or wood.

The townspeople were all wearing yellow as well. He could see not one person who was dressed in a different color. And they all were wearing dresses or suits. They looked as though they were coming back from an event- a themed event. Perhaps the sixties? He wasn’t quite sure. The clothing, apart from it being very nice, was also old looking, like something that would be worn to Sunday school decades ago. The men's hair was slick and shiny, perfectly combed, and the women's hair were pulled back in some way, not a hair out of place.

And they were all smiling and laughing with one another. The children were playing in their richly green lawns, tossing a ball between them and running around. There was a couple sitting at the edge of a fountain that sat in what Mr. Trill thought must be the center of the town. He had never seen anything so strange in his entire life. He had never felt so out of place in his entire life.

“ Excuse me, sir?” A woman, wearing a yellow dress with cream colored frills, tapped his shoulder. “ Do you need help?” She smiled. Her teeth were straight, and perfectly white, but were thin and narrow at the ends as if she had started to sharpen them.

“ Uh,” Mr. Trill looked up from her mouth, “ yes, I was wondering if there was somewhere I could stay for the night?”

“ Why yes, of course! Follow me, I’ll take you to the Inn around the corner,” she looped her arm around his and led him forwards. He continued to look around, noticing more and more things that were odd. There was a noticeable lack of garbage anywhere, of animals in yards, of birds chirping and flying around, perhaps he was just used too the way things were in the city, maybe this was how small towns were.

The Inn was no different on the inside than on the outside. It was furnished with white furniture that had yellow leather cushions, yellow shades on the lamps, yellow coasters, yellow frames that held old yellowed pictures, the color was everywhere.

It was clearly older though, the other buildings looked like they had been built to look older, and the people were just dressing in clothing made to look like it was from decades ago, but this building was actually old. The floor had thin wood planks that were painted white, and it creaked softly when he stepped. The wallpaper was slightly ripped off in the edges in some places, and was a horrible floral print- all yellow and white of course- that Mr. Trill associated with an era long passed.

“ What do ya need?” An old man looked up at him from behind the counter. In his hands was a newspaper, it was perhaps the most normal thing Mr. Trill had seen so far.

“ One room for the night,” Mr. Trill set his bag down beside him and pulled out his wallet.

“ Why the rush? Joyden is a great place to be in.”

“ I still have a ways to travel,” He lied, “ just wanna rest in a proper bed and leave at sunrise.” Mr. Trill had nowhere he needed to be, but he certainly didn’t want to be in this town any longer. It was nice, but there was something very unsettling about it. He felt he would always be an outcast. And there was simply no getting used to all the yellow.

“ Grandpop!” A woman rushed in from the hallway behind Mr. Trill, “ don’t mind him, sir, he’s been too old to do this job for years he just refuses to retire.” She pulled the old man to his feet, “ Would you mind waiting for a moment while I get him to his room?” Mr. Trill shook his head. “ Thank you so much,” She smiled briefly and turned back towards the old man.

“ I was just askin’! Askin’ never hurt no one!” The old man mumbled as he was led away into the hallway.

Mr. Trill chuckled a little bit, thinking that this place would be a great story someday. No one would believe him, and he would be fine with that, he would know it was real. He fumbled with his wallet a bit and pulled out all the cash he had and set it on the counter, hoping it would be enough.

“ So sorry about that again!” The woman came back and went behind the counter where the old man had been.

“ Well, let’s see,” She sat down and pulled an ink pen from a cup, “ Our nicest room was just emptied so,” she glanced at Mr. Trill’s wallet and her smile twitched, “ actually, you can take the room for free. I think I heard you say that you were on a trip? You should save all the money you can.”

“ Please, sir, take it as an apology for my Grandpop,” She opened a drawer and pulled out a key, “ Its behind you to the right all the way at the end.”

“ I’m positive,” She smiled. Mr. Trill noticed her teeth were the same as the woman who had helped him- narrow and pearly white with a slight taper at the end. “ Rest up now,” She waved him off, her smile unchanged. He picked up his bag and the money he had taken out, and headed off, thanking her profusely. He stepped into his room, grateful but feeling like he was ripping them off somehow, and shut the door. 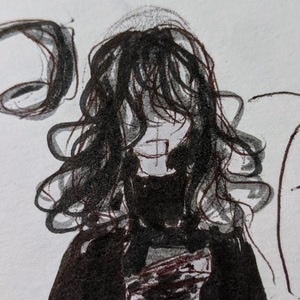 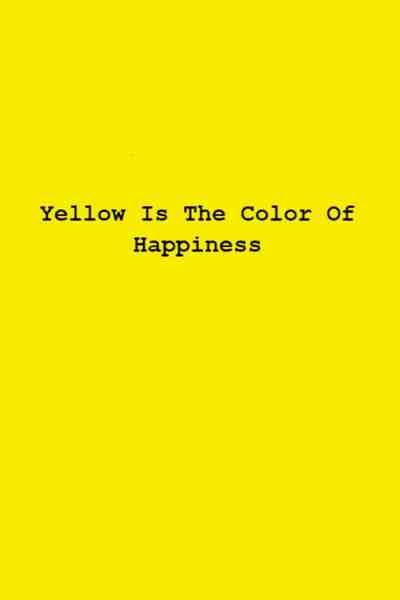 Yellow Is The Color Of Happiness

Mr. Henry Trill has taken off on an adventure. He's got no money, nowhere to return to, and nowhere he wants to go so, he hops on a bus and rides it to the end of the line. He arrives in a picturesque town in the middle of nowhere, it's an odd place though, because everything is bright yellow.
Subscribe 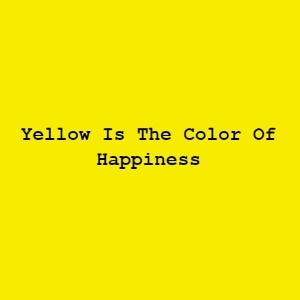