“Best five out of seven!”

Soledad Caballero let out a loud sigh, leaning back in her chair and shifting her wings to keep out of the way. “Can you both cut it out? I’m trying to enjoy our meal.”

The girl sitting to her right turned her challenging glare onto her, and then swiveled to hold out her arm. “What, you can’t eat with one hand?” she laughed. “Come on, take me on!”

“Wh—no! That was not an invitation to start pestering me!” Soledad exclaimed.

“Better than me,” said the boy to her left.

She shot him a dirty look, and then directed it back to the other girl. “I liked it better when you were picking on Carlito.”

“Besides, I’d rather actually savor the last of Dad’s sandwiches I’ll be getting until winter,” she continued, “And not ruin it by focusing on arm wrestling, of all things.”

After a moment, she tilted her head to the side and nodded.

She turned back to him, and he threw himself back, groaning.

“C’mooon! Lupe’s not here to do it; it was our tradition! We have to!”

“Okay, why?” Carlito huffed, sitting back up just to glare at her. “We aren’t Lupe.”

Mayra raised an eyebrow. “I don’t know, maybe because I’m your big sister, and I’m in charge?”

Glowering, Soledad got to her feet and snatched up her still-wrapped sandwich. “Alright, I’m eating outside.”

“Ah, ah, ah, Mom and Dad strictly said you both have to stay in my sight,” Mayra said, reaching out to grab her wrist.

Soledad sighed and rolled her eyes. “It’s not like I’m gonna go far! I’ll sit, like, right outside the window!”

Holding back another groan, she turned to scan the main platform just outside of the little café they were sitting in. Her eyes flicked from filled bench, to packed sidewalk, to—

She pointed. “There. You see that girl in the cape over there?”

Carlito frowned. “Uh, that’s like, half of the people here.”

“The one with the brown skirt, white turtleneck, half-and-half brown and blonde hair…?”

Soledad nodded. “I’ll stick with her, alright? We’ll be in sight, you’ll have someone you can ask if I’m not where I’m supposed to be—which won’t happen this time –and I won’t be running around on my own. Even though I am old enough to be doing so if I so choose.”

Mayra watched the girl for a moment longer, and then she turned back to Soledad with a raised eyebrow. “You swear you’re gonna stay with her?”

“On the lives that remain of the Byrds,” she replied. “And my sword.”

Slowly, Mayra released her grip and pulled away. “…Fine. But you’re still sitting with us on the train!”

Before either of her siblings could say another word, Soledad waved them off and scurried away.

Here's our firecracker, Soledad!! Halfway through the main characters 🥰🐉 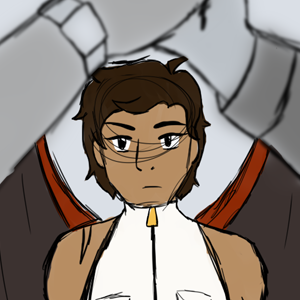