Chika Gao-Aiza struggled to keep her face in a neutral expression as she walked back to her seat on the train with a stinging shoulder and a spoiled mood. Not that it had been all that great in the first place; after saying goodbye to her family and kingdom for Gods know how long and riding on a train for eighteen hours, she’d been emotionally and physically exhausted for quite a while now. A cup of coffee and some food from the diner cart had definitely given her a boost… Until that—that jerk with giant wings and a bad attitude had to go and ruin it!

As soon as she got back to her seat, she dropped down let out a deep sigh. According to her phone, Camp Schesi was just under ten minutes away. Definitely not enough time for a nap, and probably not even enough time to fully go over the pamphlet again.

Not that it was much help in the first place.

She pulled the overly-folded paper out of her pocket and looked at the front, where the words Welcome to Camp Schesi: First Day Information sat in a neat little box. Chika didn’t need to open it any further to remember just how frustratingly vague everything inside was. There were no schedules, no maps of campus, not even any contact information for anyone. All there was was a short letter from the headmaster from the school greeting them, and an instruction to go to the Student Center as soon as they arrived. Wherever that was.

Though, in the pamphlet’s defense, most people had been able to make it to orientation a couple of months ago. Most people lived somewhere within Eydeyse and had the time to dedicate to their comparably-short journeys for a day- or overnight-trip. Chika, herself, hadn’t been so lucky, and now she was going to be left clueless in the dust.

Her attention was pulled from the inevitable social doom ahead by a vibration against her chest; she fished her phone out of one of her jacket’s inside pockets and checked the screen.

How’s the trip going? Almost there?

Despite everything, a small smile formed on her face.

We should be there in just a few minutes

Do us a favor and remember to call your Aunt Kanako when you get there? She’s worrying herself sick

Chika huffed out a soft, fond laugh. She could practically see her aunt now, pacing back and forth through their living room in a tizzy and insisting she was fine. Considering the text, Dad was probably perched on the edge of the couch and attempting to engage her in an off-topic conversation, while Pa was making a calming tea for her in the kitchen (and for himself, too, though he’d never admit his worries).

Before she could type out her immediate reaction, she recalled the lack of schedule and winced.

The speakers overhead rung out a gentle Ding-Dong!, and then the voice Chika had come to be oh so familiar with the last day and a half spoke:

Letting out a sigh of relief, Chika sent a quick goodbye to her dad and stashed the phone back into her pocket. She then grabbed the arm crutches that rested against the seat in front of her, slipping them behind her back and snapping them into the holder sewn into her jacket. With one last glance at her seat to make sure nothing was left, she headed down the aisle and to the door.

When the train came to a stop and the passengers began to exit, the station they stepped out onto was… well, hardly deserving of the title. There was an overhang attacked to cement pillars that ran parallel to the train tracks, just under the length of the train, and a few benches to fill in the spaces between. A handful of street lights lined the opposite side.

A few young adults—Chika could only assume they were upperclassmen –stopped loading luggage onto big carts to wave their hands and cheer at the people coming off of the train. They quickly went back to work, joined by some of the older students that had just arrived. The youngest of the bunch, however, simply waved back and kept heading down the path that lead them to Camp Schesi.

Chika let out a breath, pulled out her phone to snap a quick photo, and followed the crowd.

(Chika's theme music will be coming soon!! Keep an eye on my twitter or Patreon for updates!)

Chika seems like she's a person who would plan time to write in her planner. I kind of love her for that, though. 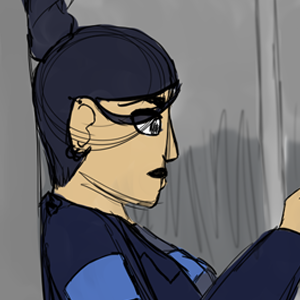