The first day back to camp was always an exciting occasion.

It was the first time in months that friends and cabin-mates got to reunite, frequently yelling at first sight and sprinting for hugs that would knock them to the ground. The fresh start of a new year hung in the air like the sweet aroma of a hot tea with honey mixed in, and there was a buzz around the new students coming in; for some, it was the excitement of having new faces around, while for others, it was the relief of not being at the bottom of the ladder anymore.

It seemed everyone was out and about in the sunlight today, and not just the new students who had yet to be assigned cabins. Today was the day to enjoy the little good weather they would have before winter struck and re-visit the locations on campus they’d come to miss in their time away. The student center, the library, the lake, the ropes course—hell, probably even some of the academic buildings were bustling with life again.

And that was exactly why Adela Kariuki was huddled up under a tree near the entrance, far away from everything else.

It wasn’t that she wasn’t excited to be back. Camp Schesi was genuinely one of her favorite places in the world, and knowing how long she was going to get to stay was thrilling beyond belief! It was just that… Well, crowds weren’t really her thing. They were usually too loud, and had too many people moving around and bumping into her, and it was just—it was so overwhelming.

Adela knew that today was already going to be exhausting, especially with a mandatory meeting soon that would be packed, so she elected to save her social energy and hide away until she couldn’t anymore. So here she sat, a closed book in her lap and her pamphlet on top of that, silently watching from a distance as people stepped foot on campus for a fresh new year. Where no one would see her and try to strike up a conversation.

…Until someone spotted her. And then that someone decided to start making her way over to Adela.

The hair on the back of her neck stood up. Their eyes met for the briefest second before she could tip her head down and pretend to be so much more interested in the pamphlet than she really was. She hoped, hoped, hoped that this girl would take the hint and leave her be, like many in the past had, but to her chagrin, she heard her uneven footsteps getting closer and closer.

“Uh… Excuse me?” the girl asked in a distinctly northern accent.

Adela looked up, eyes falling onto the girl’s eyebrow piercing and firmly remaining there.

She hesitated for a moment before speaking again. “Would you mind showing me the way to the student center?”

That was it. No what are you doing over here on your own?, nor you look lonely!, nor even an are you okay?. Just a simple ask for directions. And, to be sorely honest, to a place she ought to be getting to soon, too.

Though her shoulders sagged in relief, her tongue still stuck to the roof of her mouth, and it took her a moment before she could speak. While it worked its way down, she nodded and stood, tucking her book under her arm.

“It’s just over here,” she replied, voice so soft she was grateful they were so far away from everyone else.

Adela turned and headed off, deciding it would be easier for herself to handle it if they took the path around the academic buildings and past the cabins, rather than the main sidewalk the crowd was following. The other girl took a moment to follow, but she was quick to catch up when she did.

“Thanks,” she said, “I really appreciate this. My name’s Chika, by the way. I’m a freshman.”

Chika held out her hand for a shake, but Adela glanced at it and felt the hair on her neck stand up again. She offered her a polite smile instead.

Her lips twitched. “Oh. Guess you were here for orientation, then?”

Shaking her head, Adela let out a hum and turned back to watch where they were going. “I’ve visited campus a lot growing up, so I already knew what they would talk about there. I just stayed home.”

Chika let out a quiet chuckle, and then a huff. “Maybe you could fill me in, then. I couldn’t make it, and that pamphlet we got didn’t explain a thing.”

“Oh… Yeah,” Adela sighed. “Dr. Lani isn’t… the most fluent, I guess? Professor Wagnui usually helps her tie her thoughts down, but she insists on doing the first pamphlet on her own every year.” As soon as the words were out of her mouth, she winced. “But, um, she explains everything at the first meeting again, so anything you need to know still will probably be covered! And if it’s not, I can help!”

She glanced back at Chika, who blinked at her before smiling. “Well, thanks,” she repeated. “I’ll hold you to that.”

The two turned a corner, and she lifted a hand to point at a brick building a few hundred yards away from where they stood now. “There it is,” she informed. “If you go in and follow the hall, you’ll get to the auditorium where everyone’s meeting. There’s some couches outside of it.”

Chika looked at her. “Are you not going?”

“No, I’ll be there!” Adela quickly corrected. “I just… Well… There’s a lot of people right now, so I figure I’ll just wait until the time gets closer.”

“Do you want some company?” she asked. “We could go back to that tree, if you want. It was quieter there.”

Eyes widening, Adela blinked at her. A warmth exploded in her chest. “O-Oh, you don’t have to if you don’t want! I’ll be alright on my own, if you wanted to get there now!”

Adela bit on her lip and looked away, trying to make up her mind. After a moment, she smiled and dared to look Chika in her eyes (they were a nice shade of honey brown).

And there we have it!! All four of our main characters are now free!!! 🍪🐉🌙🌱 How soon do you think they'll all meet??

(Adela's theme will be coming soon; keep an eye on my Twitter for updates!!)

We've finally made it to the end of chapter one!!! I hope you all have been enjoying so far. To give me a chance to get a little further ahead, we'll be taking a one-week break before starting the next chapter. See you on March 1!!

Oh goodness! Is this the start of a lovely introvert friendship? 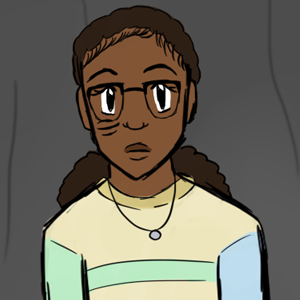