As the minutes ticked by with no one paying her any mind, Chika found herself tucked up against the wall, phone back in her hand as she half-focused on a mindless game. Her eyes flicked up every few seconds and scanned the people around her, but nothing noteworthy caught her attention. Everything was just loud chattering, hollering names, excited cheers…

Chika snapped her head towards the voice, watching as a woman with dark skin and bright blonde hair rushed in her direction. In one arm, she cradled a clipboard and a stack of papers; with the other, she dragged a small figure along. Chika tilted her head to try to get a better look, but as soon as the woman stopped in front of her, it curled up behind her.

The woman nodded and let go of the figure to pull a pen from her pocket, taking a moment to rifle through the papers to get to the clipboard underneath.

Chika leaned forward and craned her neck; at the same time, the figure peered out, shyly looking at her. Brown eyes met dark grey-ish blue, and then they were gone as soon as they appeared. She frowned.

“Sorry about that. I’ll make sure Dr. Lani updates the roster,” the woman finally said, putting the pen away.

Reaching around, she gently tugged the figure out, revealing a wide-eyed girl whose head only reached Chika’s nose. Her arms were tucked in and her shoulders hunched, and the shield she held practically covered her whole midsection. Her eyes flicked back and forth from Chika to the floor; for a moment, it almost looked like she was about to bolt right out of the auditorium.

A dread pooled in her stomach.

Please don’t make me responsible for this kid.

“This is Terra Beste. Terra, this is Chika. You guys are each other’s Schesi Somebody.”

Chika blinked, tearing her eyes away from Terra to turn to the woman just as she was handing her a packet from the stack. “Sorry, uh, I wasn’t able to make it to orientation,” she started. “What… What is a Schesi Somebody, exactly?”

Terra turned to her with a similarly curious stare. The woman glanced between them, and then an eager smile formed on her face.

“Your Schesi Somebody,” she said, “is your partner for the next four years.”

Soledad turned around, looking at the man standing next to her with a pair of dog ears poking through his dark, fluffy hair. He handed her a packet out of the stack nestled in his arms and shot her a big, lopsided grin.

He lifted the edge of the papers to peer at the clipboard nestled underneath.

And just like that, Soledad’s heart was in her throat.

As he took her by the elbow and lead her through the crowd, anticipation and nerves pumped through her veins. She was really about to meet her Somebody, her person that she’d be next to and rely on for her whole time at Camp Schesi. Her partner that she’d most likely have a life-long relationship with, if she could create a bond with them like her parents and older siblings had with theirs.

She was about to meet her new best friend for the first time.

The thought both thrilled and terrified her.

The man sucked in a small gasp, picking up their speed. “Adela!” he called. “Hey, Adela!”

A girl with dark, kinky hair whipped around at the name, the silver charm on her necklace flinging over her shoulder at the speed. Her eyes widened behind her square glasses as she took Soledad in; she could feel the stare burning into her wings, and while it would normally make her skin crawl a little, she could forgive it just this once.

After all, she couldn’t stop looking at the three clean scars resting under Adela’s right eye.

A laugh broke the two out of their trances, turning to look at the man standing between them. “You two are enamored with each other already, huh? That’s great!” he said. “Always good to see Somebodies getting along right off the bat! ‘Course, I’ve only been here one year, so I can’t speak for any meetings other than my own… Buuut, you get my point!”

He grabbed a packet out of his stack and held it out, looking between Soledad and Adela expectantly; after a beat, Soledad reached out and took it, scooting over to her new partner for them to look at it together.

“You’ve both had family come here before, if I’m not mistaken, right?” he asked, putting a hand on his hip.

Adela frowned. “What makes you say that?”

He smiled and showed her the clipboard. “Well, you have a little star next to your name, which they give to Legacies, which means you’re the kid of someone who graduated from here,” he explained. “Soledad’s got one, too, but her older sister is a force of nature that’s hard to miss.”

“What’s that got to do with anything?” Soledad deadpanned.

He grinned and tapped her nose. “You’ve got some of the same facial features. It’s easy to pick out a Caballero if you know what to look for.”

“Anyway, the two of you probably have at least a general idea of the campus map, so you shouldn’t have too much trouble finding your way around,” he continued, “but if you do, there’ll be upperclassmen around that you can ask for help. Or, if you’re really stuck, just come back here and ask for me!” He grinned. “I’m not technically supposed to help, but, me and my Somebody got super lost when we were on our scavenger hunt, and it was really frustrating, so I’d be happy to break a rule or two for you kids!”

“Uh… Thanks,” Adela replied, a soft smile forming on her face.

“No problem! And hey, even after all this is over, you can always track me down if you—”

The man whipped around at the sharp voice, and the other two followed his eyes to a woman wearing a yellow blouse and a half-hearted glare. She shifted her clipboard and packets into one arm to put a hand on her hip.

“Stop making conversation! You’ve got other kids to introduce!” she snapped.

His cheeks darkened, but he stood up straight and saluted her regardless. “Yes, ma’am, Captain, ma’am!”

She rolled her eyes and disappeared back into the crowd; Conor turned back to Soledad and Adela and shrugged.

“Guess I gotta go,” he sighed, “But don’t forget—even if it feels like it’s not allowed, you can always reach out to ask for help! Good luck!”

With that, he scurried away, leaving the pair on their own in the middle of the crowd. They looked at each other for a moment before Soledad offered a smile.

We hit 500 views on this yesterday!!! I'm so beyond excited to see that people are enjoying this and checking it out 😭 Thank you all so, so much for giving my novel a chance!!!

This ALSO brings us to the end of Chapter Two!! As it was last time, there's going to be a week-long break before we start up Chapter Three. But, keep an eye out in the mean time: there might be a celebratory ANIMATIC for reaching this view milestone!!! 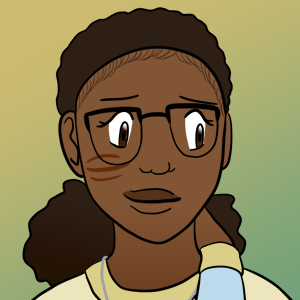