A pin could drop in the training room and all would be able to hear it. Everyone in Jun’s unit stood silently, awaiting the lead corporal’s commands. Everyone except for one notable exception.

“Ranger Kim!” Corporal Hampton barked into Jun’s ear. Anyone could tell he was aiming to be a warrant officer.

“Where! In Jupiter’s red blazes is Ranger Kelly??”

He took a few steps so he could deafen the rookie’s other ear. “It’s been a month and you still don’t know??”

“He was gone when I woke up...sir.” Jun almost forgot.

“Then wake up sooner!” demanded the corporal. “Captain Phelps didn’t hire you to pal around with him. I want that menace present and I want him here yesterday. Do I make myself clear?”

“Alright, men.” Hampton addressed to everyone. “As you know, this is not a democracy. But today I will give you a choice. Since Kelly is not here with us, someone has to put in the work for him. Either all of you do 1 ½ miles, 6 laps, or you all get to do the standard 4-lap mile, but Ranger Kim here,” he clamped a hand on Jun’s shoulder. “has to run 8 laps. 2 whole miles. Raise your hands if you want to run 6 laps!”

That wasn’t even a choice. Still, Jun sheepishly held up a hand, already knowing that no one else would. The regular exercises were already hard on the rookie, but the next 15 minutes proved to be torture. Swallowing magma would be preferable to the burning in her lungs.

“Wow, you look like you’re about to die.” Aiden almost went unnoticed by Jun after staggering out of the training room.

‘Where were you?’ the dark-haired ranger could’ve asked, had a coughing fit not struck at that moment. Her oxygen-deprived mind could only think of the warnings she saw when searching for a chest binder: ‘Don’t wear when doing rigorous activity.’ ‘Take breaks if you feel short of breath.’ ‘Never sleep in this.’ All of these were disregarded, and now the rookie was paying the price.

“Okaaaaay…” He didn’t seem to believe it, but he left anyway. Jerk.

This couldn’t happen again. Jun was determined not to let an incident like this happen again if it killed her, because the alternative might.

“What are you doing?” Aiden asked from the top bunk. Bedtime arrived, but Jun sat, arms folded on the single bed across from him.

“Making sure you don’t disappear.” the rookie answered, preparing for a long, long night. “You’re coming to training with me tomorrow.”

He propped his head up with his hand. “So let me get this straight: You’re going to stay up all night and watch me sleep?”

“You know you’re going to have to watch me get dressed, right?” The blond ranger pointed to his clothes, which were all on the floor.

“That’s a sacrifice I’ll have to make.”

“And what if I still don’t wanna go?”

He shook his head and laid back down. “Okay. Goodnight, creep.”

Jun watched until Aiden fell asleep. She watched and waited, occasionally checking the clock on their dresser. Minutes could not go by any slower. Still, the rookie’s eyes were open and alert, ready to stay that way for the next 6-8 hours.

The clock read 6:00 when Jun woke up. Aiden nor his clothes were anywhere to be seen. He slipped away.

Grabbing her cellphone, the rookie texted any corporal or warrant officer she thought might be nice enough to tell her Aiden’s whereabouts. Jun rushed out of the dorm and around the ship, not wanting to waste too much time waiting for answers. Time slipped away far too quickly. No sightings were reported, just rejections. Jun visited every place she had seen him, but no luck.

The rookie came to a stop. Looking in any random place wouldn’t work, decisiveness is key. Where would someone go if they didn’t want to go to physical training? Probably the most inconvenient place possible. Where would that be, though?

As if to answer, the phone buzzed in Jun’s pocket.

“I saw him heading into hall E-18.” reported Corporal Morello.

Jun texted back a simple “thanks!!” and left for hall E-18. The rookie often went there for technician training, and it was located halfway across the ship from the training room. While majorly inconvenient, at least it was still on the same floor.

7:00. Thirty minutes left. Aiden stood on the other end of the hall when Jun entered.

“I found you…” Jun couldn’t help but smile. The dark-haired ranger began chuckling, but it devolved into coughs. The wild goose chase she went on served as enough of a workout. “We need to--we really need to head to training.”

“Then you better get going!” He shouted.

“If you’re late then it’s as good as me being late! I can’t go back without y--!” the rookie got cut off by more coughing.

Aiden finally made his way over. As slowly. As possible.

“Why do you need me there so bad? If anything, you should stay here. You look like a wreck.” He laughed when he approached Jun.

“Don’t go?” Jun wondered if he really thought that would work, until remembering that it did for him. “I can’t just not go. What’ll happen when I go back the next day? I can’t go in like ‘ ‘Sup Hampton. Sorry about being a no-show yesterday, I had to, like, take a chill.’ He’d work me to death!”

“Who said you had to go back at all?”

Jun’s head shook. “Kelly, you said it yourself. The only reason they let you get away with stuff like that is because they can’t get rid of you. I’m just an average guy!”

7:08. The rookie couldn’t afford to get sent home now. Someone counted on her to at least make it past Mars. Anything less than that would render her struggles worthless.

Aiden seemed to be contemplating something. He looked out of the window beside him, to the billions of stars in the distance. As stressed as she was, Jun had to admit it was a pretty sight.

Finally, he gave an annoyed sigh, and walked toward the door.

Jun couldn’t believe he changed his mind that quickly. “Sure!”

“I haven’t decided whether to go to training yet. I could turn around at any time.”

The rookie ignored that, happy he even headed that way at all.

“Our trainer guy is Hampton, right?”

“Ugh.” the blond ranger grimaced. “Now I remember why I stopped showing up. He’s like a drill sergeant.”

“Isn’t that basically what he’s supposed to be?”

“So we don’t pull a muscle or get too like, out of shape when it comes to when we have to train with the jet armor.” reasoned the rookie. To be honest, Jun didn’t really know. “At least, that’s what I guess it is. I dunno.”

Aiden folded his arms. “That’s never been a problem for me. I don’t see why I have to do it.”

Jun shook her head. He sounded like a stubborn child.

“How is punishing you for what I do gonna help either of us?” the blond ranger continued. “Are you any more useful when you’re strung out from all that exercise?”

“No ,but I think he does it because… I dunno.” Jun shrugged. “I think it’s to teach cooperation or something…?”

“It’s a bad way of doing it! You can’t tell me otherwise.”

Aiden turned to Jun. “You think I don’t know that?”

Thinking about it, the rookie realized he probably had a lot of experience with that.

“I did a lotta things I didn’t wanna do because I had to.” He stopped walking. “We don’t have to do PT. It’s not like we’ll die if we miss a day!”

7:15. There wasn’t time for this. Jun started to catch on that Aiden wouldn’t go along with the program unless he had a reason that worked for him.

“What if something happened to the ship where we all had to leave with the jet armor?” Jun questioned. “If all of us weren’t fit enough to use it, some people could get lost in space.”

“How is jumping jacks gonna help with that?”

“I… don’t know.” That almost stumped the rookie. “But stretches will!”

“Okay.” Aiden seemed satisfied. “Sure, I can buy that. But if that’s so important, then why doesn’t the corporal do it? Why not the warrant officers or the staff majors or the captains?”

“Because--!” Jun really didn’t know the answer to that one. “Uhhhhhhhhhhh...”

“You don’t have to answer that.” He folded his arms behind his head, starting to walk again. “You already convinced me to go… but you can’t convince me the IF is doing this all for our sake.”

Jun breathed a sigh of relief.

“Yeah. They’re not, I can’t argue that, but-- Dude, like, I admire how much you’re willing to ask questions about the purpose of authority and why things are, but a lot of it is there so that we each do our part. If we didn’t, we’d die in space.”

Aiden looked back at Jun, squinting. “Of course we won’t let ourselves die! People are gonna do what they need to to survive, regardless of someone tellin’ ‘em to.”

“You sure?” Jun wasn’t. “I feel like there’s a certain amount of cooperation that needs to be enforced for us to function as a society. Not everyone’s gonna do what they need to on their own.”

He rolled his eyes. “Whatever, Officer Kim. Who even needs a society?”

Jun didn’t expect to get this deep of a philosophical question this early in the morning. She wishes she kept her mouth shut after he said he’d go.

“If we each did what we needed to survive, wouldn’t that be enough?” Aiden continued.

“M-maybe? But what about people who can’t, like kids?”

He paused. “There’s enough people willing to help each other without needing to be told to.”

Jun smiled. What a surprisingly comforting statement to come from Aiden Kelly.

“You almost left me out to dry!”

“I didn’t know you needed help!” He defended. “But when you told me, I figured I didn’t want Hampton to pin your blood on my hands if you passed out. Just wanted to make sure you were thinkin’. The IF counts on us not questioning their rules.”

“Kelly, it’s too early in the morning to think. Plus, I barely got any sleep!” complained the dark-haired ranger. “Save your ideological discussions for later.”

“Barely got any sleep? Ha! You were knocked out when I got up.”

7:20. Jun shook her head and clamped a hand onto Aiden’s shoulder. “Let’s just get going.”

He shook the hand off and hurried along, followed by Jun. 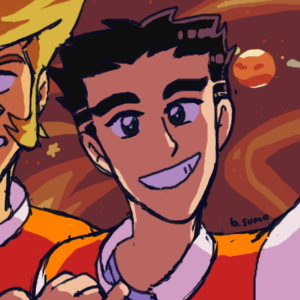