Angelo stood face-to-face with himself in the mirror. Sure, he ruined his parents’ lives and trapped himself in an ongoing lie to them and his brother, all of which ate away at his psyche with each passing moment, but he had one thing going for him.

Good eyes. Aiden’s words played in head on repeat. It had to mean something for that much of a jerk to say something nice to him. Or maybe he was nice? He laughed at Leon, so he couldn’t be. Plus, the results backed it up. Over the past few days, his eyes led him and Aiden to high scores and high praise–even from Captain Galhardo! Angelo finally had a useful skill. Two if he counted being able to work the furnace.

Which meant he had to stay on this ship as long as possible.

“Hey Ángie.” A dejected Leon greeted him in the hallway. “Roxie told me that a rock from Mia’s collection ended up in the kitchen, so I thought maybe I should try searching farther out for my phone, but,” he sighed, “no luck.”

“I-I’m sorry…” Angelo truly was despite everything.

“It’s okay.” Leon tried to comfort him. “No matter what, it has to be here somewhere! I just hope everyone at home’s not worrying too much.” They were, but for reasons he couldn’t even begin to suspect. “C’mon, let’s sleep on it.”

Angelo stood back while his brother knocked on their door.

Both Summers entered the room to find Aiden laying on his bed, fully clothed. Angelo tried to pretend he wasn’t there as he approached the bunk bed ladder.

Then he heard it again.

“Hm? Did you notice something?” asked Leon.

“S-Sorry. It was just my imagination.” Angelo reminded himself.

“He’s been doing that every day.” Aiden really didn’t have to point that out.

Leon didn’t seem to think much of it, thankfully. “Huh. Ready for bed?”

“Yes.” Angelo placed a hand on the ladder.

Luckily for Angelo, Interstellar Forces Basic Training didn’t require him to do any climbing. Unluckily, getting to his new bed did. This led to Leon helping Angelo climb to bed every night.

“Why don’t you just switch beds?” Aiden really didn’t have to ask that either.

“Huh.” Leon considered it. “That does make sense. Ángie, do you want me to take the top bunk?”

“Oh, okay! You only really needed me for emotional support, anyway. Do you wanna try tonight?”

He looked up at the ladder. “...Maybe tomorrow.”

Angelo could’ve hugged Leon on the spot, but knowing Aiden would see made him think twice. Instead, he climbed up the ladder feeling safe with his brother behind him.

Leon finally backed away once Angelo crawled into his bed. “Good night, Ángie!”

He backed toward the light switch. “Good night, Aiden.”

No response came back. Angelo didn’t know why he bothered. The light turned off, and the newest ranger finally snuggled into bed.

Right next to the phone he ‘lost.’

Angelo pretended several times to check for it in the space between his bed and the wall, but of course he said he never found it. He couldn’t let Leon find it; he couldn’t even bring himself to. Who knew what heart-wrenching texts his parents sent him? It’s for the best that no one ever looks at it again, but there was one problem.

He still heard it buzzing. The phone had been set to silent, he remembered doing it. But did he really? Either way, he couldn’t check now. His only choice now was to try and stop his thoughts from racing long enough to fall asleep.

Before he knew it, he shot awake from his regularly-scheduled nightmare. His heart pounded thinking of the many doors he shut, the many locks he locked only for a giant pair of shears to cut through all of it like butter. His hands gripped the sheets as if he was still crawling backwards while the scissor-handed figure cornered him in the bathroom. Buzzing clippers sent chills up his spine, even though the sound disappeared with his dreams.

Part of Angelo still wished it had happened so dramatically in real life. Maybe he wouldn’t feel like such a loser waking up with tears in his eyes almost every night.

The light shining under the door from the hallway was enough for Angelo’s eyes to make out his brother, talking in his sleep. Leon had no idea how often his sleeping quirk helped him. It brought Angelo a little closer back to reality.

“Hm? Nooo. Of course I’d never leave you behind.”

It brought a smile to his face, watching his brother get lost in a better dream. He wished he could be there with him.

“I’ll never leave you behind… Becky.”

He still dreamt about Rebecca? How annoying. They broke up months ago. He should’ve known it would never work out when she told him she wanted to work in submarines. That’s the furthest from space anyone could get! Leon’s dreams were so much more fun to listen to before romance entered the picture.

Angelo laid back down in order to try to get some sleep. The terror from his nightmare wore off some, but something still nagged at his mind. If he couldn’t trust himself to lock doors, could he trust himself to remember to set the phone to silent?

Pulling it from its hiding place, he turned it on. Only after he blinded himself with its light did he realize this was a mistake.

Angelo shoved the phone into his lap, waiting with hitched breath for his brother to say something else. He didn’t. A few moments later, Leon turned to face the wall. His brother continued watching him, making sure he fully fell asleep. As soon as he was certain, he jammed the phone as deep as possible where it came from. He’d deal with it later.

Morning came and went, and so did training. By the afternoon, all Angelo could think about was that phone. That horrible plague of a phone. It might as well have been haunted!

Unlike most things, Leon didn’t make it any better. “It’s been a week…” He nibbled on the last of his granola bar. “I don’t know where else we can look for that phone. Do you, Ángie?”

“No.” Angelo lied. “Do you want my granola bar?” He really wanted it for himself, but the least he could do for Leon is give it up.

“No, you can have it… I just wish we were able to, I dunno, somehow track where you last had it, you know?” In a concerning turn of events, Leon’s face lit up. “That’s it! I think I know how we can find it!”

“You do?” Angelo tried to hide his nervousness. He tried badly, but he tried.

“Yeah, I just gotta ask Emil something.” Leon handed Angelo his granola wrapper. “Can you throw this away for me?”

He made a beeline for the stairway. “I’ll be right back!”

Angelo didn’t know what his brother had in mind, but he didn’t want to sit around and find out. He threw the trash away and headed in the opposite direction, down the hallway and to their dorm. A fatal flaw hit him in the face as soon as he opened the door.

The ladder. Without Leon, he couldn’t imagine reaching his bed on his own, but he had to try. He put his hands on the rungs, finding the strength to work his way up through pure panic. The bed stopped him in his tracks. He’d crawled into it many times before, but without his brother’s support, he felt certain that he’d fall back and probably die. He was a sitting duck.

So of course, Aiden had to show up.

He looked around. “Where’s Rookie?”

“What are you doing?”

“T-Trying to climb t-to my bed.” Even if he made it, would he be able to get the phone without Aiden noticing? The whole plan might have just gone up in smoke. He took a few steps down.

“Oh.” Aiden lazily strolled over and plopped down on the bottom bunk.

Something scraped down the wall. The sound startled Angelo so bad, he fell off the ladder onto the floor.

“You okay?” The older ranger sounded more curious than concerned.

Angelo stared up at him, unable to say or do anything.

Aiden leaned back to retrieve what fell. Pinched between his fingers, he lifted a yellow disk in front of Angelo’s face. “Found Rookie’s phone.”

Too stunned to speak, Angelo didn’t react. He didn’t have to. The other ranger glanced between him and the phone, coming to some kind of realization.

“Ohhhh, I get it.” A stomach-turning smirk crossed his face. “You weren’t trying to find this, were you?”

“Relax. I wasn’t plannin’ on sayin’ nothin’.” He gave the phone to Angelo. “As long as it’s between you two, I don’t care. Go hide it again or whatever.”

Angelo clutched the phone in his hands like a squirrel with a prized nut. He couldn’t hide it in his bed right now, unless… “Can you help me climb th-the ladder?”

“Pshhh, naaaah!” Aiden giggled. “However this plays out is on you.”

Was this a game to him?

He looked away. “The ship’s pretty small though. Your brother’s not the sharpest tool in the shed, but I don’t see how you can keep the wool over his eyes much longer without getting rid of the thing.”

Those last words sprouted a horrible, terrible idea in Angelo’s mind. The worst one he’s had yet! He turned the phone into a bracelet, stood up, and got the gloves he laid on Leon’s bed. He pulled them on over his wrists.

Before leaving the room, he gave one last look to Aiden. “Thanks.”

A blur of scenery led him into the burner room. The gloves were on the floor. At some point, he had turned on the furnace. Flames danced inside, hypnotically so. He held the phone in his hands.

He held his brother’s phone in his hands. He had to get rid of it. But it was Leon’s phone. That’s why he had to burn it; it’s in Leon’s best interests not to have this haunted phone around, vibrating when it shouldn’t be. Was the phone haunted or was Angelo by his actions? Plus, how would he explain the phone ending up in the furnace? If it charred badly enough, he wouldn’t have to. Leon would be really sad if his phone got burned.

He’d be distraught if he saw the messages on it.

Angelo held his brother’s phone in his hands, with only one thing left to do. He raised the phone up, then back down, then back up again, trying to convince himself not to think and just commit. Tears welled up.

Just as he readied himself to throw, a click came over the intercom.

Since when was there an intercom? 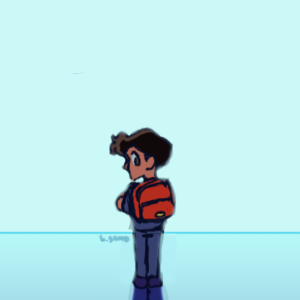