I have had the strength magic of my boots turned off since setting the elf down in the wagon but I'm tempted to reengage it. Instead I go over to where Nikola and Merlin are walking behind the wagon. The large stones beneath our feet are a lot more smooth than the cobblestone streets of Centrum. They're also worn from years of wagons traveling over them and remind me of ancient Roman roads that are still used back home. Built to last. There's no telling how old these paths are.

"Hey," I say before glancing back to confirm the tall figure who looks an awful lot like the dragon woman is still behind us. Granted it looks like they're about a mile away, they're still there on the road, matching our pace. "So, not to alarm you both but the dragon lady who's been following us is maybe still doing that."

Then I remember I didn't tell them about seeing her at the inn, or anywhere else.

"Okay, so there's been this big buff dragon person who's been, almost everywhere we have when we have and last night she was at the inn demanding a room. New Look told her there weren't any rooms. I spoke up and the dragon lady got scared and left."

"Why didn't tell us this before we agreed to protect a wagon transporting dragon eggs destined to be made into omelets?" Nikola hisses.

I take a deep breath. "Because I wasn't thinking beyond 'get out of town as quickly as possible.'"

"What do we do?" Merlin asks, her hand on the sword at her hip.

"We keep moving forward," I say. "If she gets closer I'll use my boots and do my best. Maybe I can scare her off again?"

I can tell he's annoyed I had sat on the information about the dragon woman. Not only did I say nothing about her but also not telling them about the vampires shows a pattern in my behavior. And not a good one. I'm not trustworthy.

Nikola heads to where I had been walking on the right side of the wagon and Merlin moves to the left leaving me in the rear and closest to where the dragon woman is. She's still pretty far away. No one else is following us. No other wagons on the road or people on foot. The land has gotten even more flat. We travel along the plain for a few yards before I notice something in the distance approaching us. Off in the grasslands to our right are five or six large things, dark in color, are moving quite quickly.

"Hey, Image!" I shout. "What are those thingies to our right?"

"To our right?" He calls back. Then he shrieks. "OH GODS NO! WHAT ARE THOSE DOING HERE?!"

"What?" Merlin asks. She runs ahead so she can see around the wagon and shades her eyes with a hand to get a better look. "They look like horses."

I look back at the figures and discover they are a lot closer than before. They do look a lot like horses but Image's continued alarm doesn't seem like a good sign.

"What? Abandon your orycturine?" Nikola asks.

Image leaps down from the wagon and books it back the way we came. "If we're lucky she'll slow them down!"

I knock an arrow and aim my bow at the oncoming creatures. They're way closer now. Disturbingly fast and huge. Six Clydesdale sized horse-like creatures, with hoofed feet that also somehow have sizeable claws. They've also got sabertooth cat-like teeth and appear to be coated in blood that almost mists off of them with every pounding step they take. To my surprise Nikola and Merlin are by my side, weapons drawn. I let the arrow fly and manage to hit the closest of the marrow ponies in the eye. The animal doesn't even notice it.

I pull another arrow from my quiver and don't have time to draw the bow before a gold and red mass hits the marrow pony like a runaway freight train. The other animals break from their gallop and change directions after their leader is knocked to the ground. I follow the direction of the movement and stare in horrified amazement as the huge dragon woman who's been following us tears into the marrow pony with a series of open handed swipes. The pony bites at her and she replies by latching on to its throat with her own crocodile-like teeth, before rolling over the pony's back and spinning the horse-like creature in a death roll that flings it further from the road into the grass. The dragon woman stands between us and the marrow ponies, panting, covered in blood. The lead marrow pony gets to its feet, the other five look to it then follow it back into the grasslands when it leaves at a quick gallop.

None of us speak but I lower my arrow as the dragon woman turns around. She smiles, at least I think she does.

"Sorry about that," she says. "Not sure why they're out here but things are weird lately." She spots my bow and arrow. "You probably would've been fine. Your arrow was totally killing it."

I hear footsteps scrambling toward us on the road and turn to see Image running back to the wagon. "Thank you!" he calls with his arms in the air. "Thank you so much oh noble fafniric warrior!"

"Heh," the dragon woman huffs before bowing toward Image. "It's no problem, I was heading this way as well."

She's easily seven feet tall, probably more, especially if you count her horns. They aren't huge but they're still pointy and stick up out of the top her her bright fluffy hair like an ebony crown.

Image is falling over himself, rambling and bowing, as he continues to thank the dragon woman for saving his cargo. She looks at him but her gaze keeps coming back to me. I find it more than a bit unsettling considering she's still covered in a lot of blood.

"Do you mind if I travel with your party?" She asks me.

She raises a scaly eyebrow. "I'm not sure what that word means."

"My name is Sigyn," she explains. "She and her," she says with a bow. Then she looks down at me while still bent at the waist and adds, "I'd like to join your party."

What else am I possibly going to say? No? 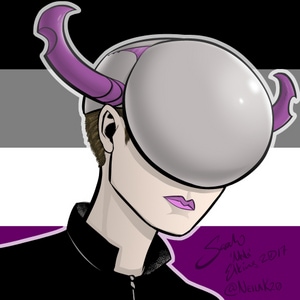 There wasn't going to be art but surprise there is art here and over on my personal website SarahNeilaElkins Dot Com!

Chapters will go up on my blog on Wednesdays and then update on Moonquill and Tapas on Mondays. We shall see if I can stick to this!

Thank you for being so patient and believing in me. Here's Chapter 12 of The Wrong Wizards! Featuring the best future girlfriend in the world Sigyn! 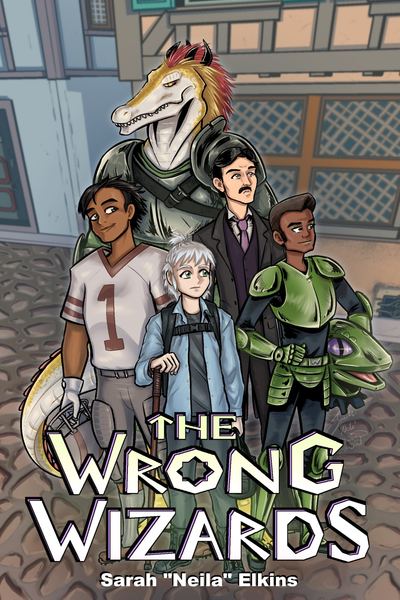 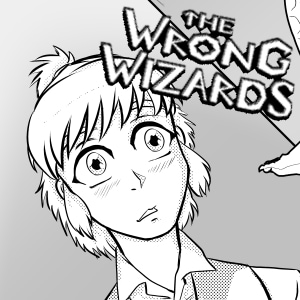