Every Color In The Sky

Running away is a funny thing. You say: ‘yeah it will be fine, I’ll just walk into an unknown place that I’ll probably be killed in, but that’s okay because dying while being free is better than being stuck here.’ And then you take a while going back and forth saying: ‘no, I shouldn’t run away. I have school. I have people. Wait. I don’t have people, so why am I staying then?’

It’s a constant back and forth until one day you wake up at 3:34 A.M. and suddenly decide: now. Now is when I run. Right now.

I thought about all this. And now, at 3:34 A.M. I stand with my dark brown backpack deciding which clothes I should take with me.

It’s dark outside. The nighttime air flooding the apartment I live in with Aken. He was Mom’s boyfriend before she died. My real dad left when I was small, and I have no actual family. So, I went to Aken. I do not like him.

The cool air seeps into the apartment. Pale moonlight frames the floor and rests on my face. It’s like being submerged in water.

I turn to my bag and shove in some jeans, baggy T-shirts, and extra socks and underwear. I rummage through my dresser until I pull out my acclaimed ‘apocalypse pants’. They’re green and baggy and have pockets that I can fit multiple rocks in. I love them more than is reasonable for pants.

I pull on a sleeveless white crop top. Which I probably shouldn’t wear because I’m running into the Forest. But I like it. I’ll just put on a big jean jacket to protect my arms.

I put on colorful socks and boots that go a little above my ankle. I tie my boots tight. Deep breaths.

I have thought about cutting my hair before. Maybe to my shoulder, but I don’t want to be recognized at all. I never want to come back here once I leave. And Aken would know me with my long, dark, curls. He doesn’t know anyone else here besides his friends. And most of them are dead

Besides, I’ve always wanted to do this. Shorter hair feels more me.

In Kyson, the city I live in, most people keep their hair short or tied up. It’s traditional, Kyson being the military city out of the Four Towns and all.

Four Towns are what it sounds like. It’s the union of the four cities.

Kyson, being the warrior city. We train and house the army and such. I was never one into fighting. It see-ms like a waste of time. You can’t really change everything when you’re someone like me. I have no power, and know no one with such power, or anyone for that matter, so I don’t fight. I run. I don’t feel good about it either.

My mom was from the sea city, Della. Della is an island city. It’s a transport hub for most of the Four Town exports. She said it was breath-taking there. I had a dream where I’d live in Della. I lost that dream years ago.

Then there is Flora, the working-class city. It makes all the imports to Della. All the food, goods, every piece of clothing, every book, everything comes from there.

Finally, Ender City. They hold the government. A skyscraper city with officials and diplomats. I heard it’s all metal and stone.

I’ve never been anywhere except Kyson.

I slowly open the bathroom door so as not to allow it to creak and wake Aken.

The bathroom is small. With a sink and mirror wedged into a corner by the shower. The pale tiled floor casts a gloom over the walls. I slowly tiptoe in front of the mirror.

I bend down and pull open the small cabinet door. I search through the junk until I find a small pack. Inside is a razor and scissors.

I look back in the mirror.

I think I look like Mom. I have brown skin and that dark curly hair. My hands are large, and my body is small. My palm is the size of my face. I have big eyes and a bridged nose that hooks out.

My irises are gold. That’s the only special thing about me. I have gold eyes. I like them because gold eyes should be non-existent. But here I am, with those gold eyes.

I say gold eyes, but only one of my eyes is a shimmer. My right eye is more of a dulled gold, but still gold, nonetheless. I think it’s because I’m blinded in that eye. I was at birth, so it’s not a big deal. People tend to think it is. It’s not. I’m not a baby. I’m not helpless.

I take out the scissors slowly. They glimmer in the moonlight. I move them back and forth, squinting as if they are this dangerous thing. I have always liked dangerous things.

I angle them over my hair. I close my eyes. I breathe. I cut.

I peel open my eyes and watch as I snip off all my curls. They fall gently in the sink. I shake my head to rid the hair hanging on. My curls stop at my chin.

I pull out the razor. Mom used to say that if you only go halfway, you’d be stuck wondering what would happen if you went all the way. It’s a fancy way of saying ‘Go Big or Go Home’.

I turn on the razor. It makes a small buzzing noise. Luckily, it’s not enough to wake Aken. He is in another room. I don’t know how he can afford this place. I feel like all he does is drink and yell at me.

I run my hands through my hair, feeling the sudden coolness of the night on my head. I feel weird. Like, empowerment but that's weird, isn’t it?

I take all my cut hair and flush it down the toilet. I get my backpack and sling it over my shoulders. I should have a few days until someone notices I’m gone.

I gaze at myself in the bathroom mirror from my room. My room is small, smaller than the kitchen. It only fits my bed and my dresser.

I look different. Usually, I’m dressed in school uniform or my pajamas. Never I dress in clothes I actually like. Like I said, I feel weird. Weird, but free?

I walk through the living room and into Aken’s bedroom. I push open the door softly. He’s snoring, twisted in blankets.

Aken looks nothing like me. It’s a good thing too. I hate him. Pale, brown-ish blond hair, and a thin, boney body. I purse my lips and move closer, kneeling by his face.

“Goodbye, Aken,” I whisper. I stand and close the door. I walk out of the apartment and down the hall. The silent corridor feels eerie during this time of night. The dull bread-colored walls and summer leaf green carpet. A single light illuminates the hall every few yards. Nobody else is out, probably because it’s almost 4 A.M.

So, I walk through an empty building. And an empty street.

Streets in Kyson look straight out of a movie. Blinking, neon signs advertising shoes or food or drugs. The stone-lined sidewalks and flowery, green plants in storefronts. I watch as a woman in a tight red dress stumbles from a night for too much drinking.

Yup, never guess that this shit-town is Military.

I hold onto the backpack’s straps as I continue down the sidewalk. I walk towards Avenue Park. If you walk through far enough it leads straight out and into a meadow. And then the Forest.

In school we are taught of the dangers of the Forest and why to NEVER EVER go near, or into it. School is bullshit. They don’t teach the important things, so I decided not to listen. Besides, the worst is death, and I could be murdered in Kyson. But all they care about is how Kyson is the safest Four Town.

I don’t know what is in the Forest. Nobody does. Nobody except those fools in the government, controlling everything. Travel, food, even medicine.

For example, when you are born you are implanted with a chip. It rests in the side of your mouth, buried under skin. It releases medicine so you don’t have to get injected. A nurse must put a cord into it and press a button that transfers the medicine from a jar to your chip.

It’s stupid and I’d rather be stuck with a needle once every five years than bite on this metal circle every day.

A man is sitting on a bench by Avenue Park, completely passed out. I slide past him and walk on the grass.

Trees start to sprout up around me, leaves shaking in the slight breeze. I keep walking straight past. To the meadow hill.

They never gave a name to the Forest. Everyone just calls it ‘the Forest’. Asher Glenn, the current president, said that it’s better to just call it ‘the Forest’ than name it. He doesn’t seem to like discussing the Forest

I rub my eyes into focus as the trees thin out. I am left staring at a vast expanse of tall grass and the rising sun.

Down the hill are enormous, looming trees. They are the size of skyscrapers. The trunks must be as wide as a building itself. I can’t even imagine the leaves.

I take a shaky breath in and plunge myself into the grass. They brush my shoulders as I walk. My boots squish the wet dirt beneath me. I screw up my face at the sound. It’s sloshy and reminds me of the so-called marsh Mom told me of.

I continue, my chin itchy from the grass and my boots muddy from the ground. I stop as I near the trees.

I have no idea what is in there. I could be dead in an hour.

I step into the trees. 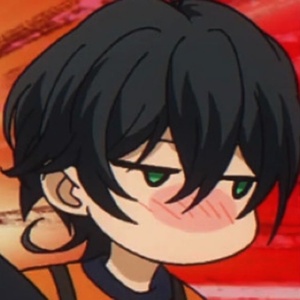 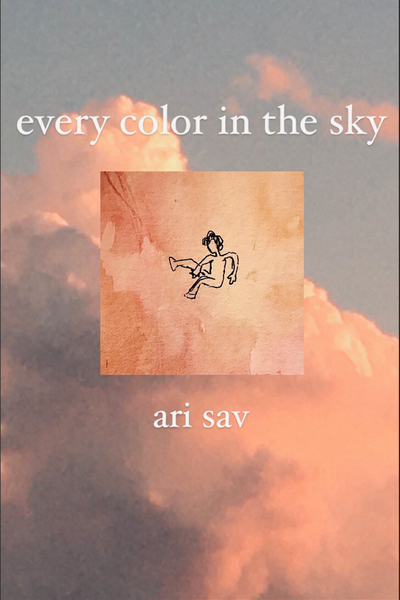 Every Color In The Sky

Every mythical world Bastet has read about is paradise compared to the hell they live in. Maylea is not that place. With some possessing unordinary abilities, two friends as different as the sun and sea, and a pretty assassin out for their head, Bastet has to learn the consequences of running away.
Briar has always kept her mind at a distance. Maybe if things are put afar then she won't feel the sting. She's always been searching for an out, a way to escape her life and create a new one. That escape just might be the person she accidentally fell in love with. It might be the person she was ordered to kill.
Nyx's theory is do harm be harmed. But nobody can touch you if you're up in the sky. Unfortunately , nobody ever tells you the burn out of a god. And all these visions of the world aren't helping xer's case.
So, what happens when a Runaway, Assassin and God meet?
Subscribe 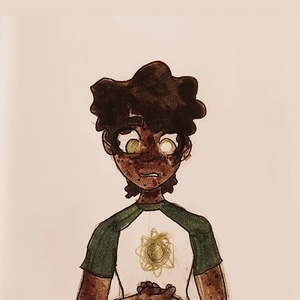