An army of undead monsters bashed and clawed away at the stones, then crawled through the breaches as the walls collapsed. Ghouls—both humanoid and beastly—dragged themselves forward on whatever rotting limbs they had to eat the humans and their fallen dead. Wraiths shrieked and howled as they slashed claws of corrupted Ether that sundered flesh and stone alike. And a cloud of dark specters had congealed above the battlefield like an ominous storm cloud, sending a crackling barrage of black lightning onto the fortress.

Despite the desperate attempts of the humans to stop the monsters, there were too many of them, and the undead horde grew in number the longer they fought. Already, many of the monsters had made it past the outer walls, and what remained of the human resistance was collapsing in tatters, drowned under a dark wave of vengeful monsters—some of which were the reanimated corpses of their former companions.

The only human survivors, now, were all within the inner walls of the city. However, the only fighting force that remained was one knight brigade—a squadron of the twenty paladins that had been the lord's personal guards. The knights were already gathered there already behind the gates, mounted in full-armor on their weary horses as they watched the monsters tear the portcullis apart.

"Knights!" the old commander yelled, pointing his sword up to the sky as the first monsters broke through. "Today, we wield our sword against evil. Remember, we may die today, but justice never cowers! For the Empire! For Lord Alan!"

"For the Empire! For Lord Alan!"

The knights yelled, raising their swords in response as if to raise their courage. They may die today, but they were the proud paladins of House Alan. So long as they fulfilled their duty to their lord and the Empire, their deaths would not be in vain.

With a ferocious battle cry, they charged forward into the undead swarm.

But soon, their yells were overwhelmed like the others by the the clashing of swords, the shrieks of the wraiths, and the gargling of the ghouls.

And Fleur heard it all. From their last battle cry to the first exchange of blows. Even down to the moment when each of them died.

"Foolish," she couldn't help but mutter under her breath.

It was such a waste. A futile resistance, and an even more futile death. Why did the humans even think that throwing themselves into an undead horde that outnumbered them would change anything? Did they think that with courage and justice on their side, they would become unbeatable? Was their honor more important than their lives?

She never did understand humans.

In an underground passageway deep beneath the fort, the Lord Alan the knights were dying for was escaping with his fiancée. The winding passageway carved into the bedrock was dark and damp, and sometimes rubble would fall from above when the castle rumbled. The only light was from the illumination orbs carried by the two knights escorting them.

"What? What was that?" Lord Alan jumped at the sudden sound that broke the silence. The young lord's face was pale and sweaty, and his fine silk green tunic was wrinkled and covered with soot and sweat. His green eyes darted frantically behind at the shadows that submerged the tunnels behind them. "What is it? Is there something behind us? Have they caught up to us?"

"There's nothing, my lord," said Jon, the knight at the rear. "But we need to hurry, before the swarm breaks through. There's no guarantee they won't find the passage."

"Indeed," Van, the knight leading the way, nodded grimly. "This swarm is eerie. That the dark monsters would attack when our army is away seems too much of a coincidence."

"It was nothing," Fleur said with a pacifying smile. "I was just praying for the brave knights that are defending us. Calm down, dear. They won't come after us so quickly."

'After all', she thought wryly. 'They still had a feast to enjoy.'

"Of course, of course," Lord Alan said, wringing his hands. "Let us make haste. We'll be safe once we reach the sanctum."

"But will we truly be safe?" Fleur asked with worry. "Those monsters are truly terrifying. And they seem so strong…Will they…?"

"Don't worry, dear," Lord Alan held her hand in reassurance. His hand was clammy with sweat. "Just a little further and we'll reach a safe area. Nothing will be able to find us there."

"Oh my. Truly? Safe even against the undead?"

"Not to mention the undead, even if it were a dragon that came they wouldn't be able to find it, not to mention get in," he boasted. "We have the best cloaking formation here, better—I say—even than the Academy's—as well as an artifact that—"

"It's alright," Lord Alan waved his hand carelessly. He seemed to have restored some of his confidence now that they were almost at the sanctum. "Fleur will be my wife soon, so we're all family. What difference does it make? This is a good chance."

"Anyways," he continued. "These tunnels have been passed down for generations. Only the heirs know about this place. There's also a trump card that we can use that will take back the castle from any enemy. This is the secret behind our family's survival despite the many wars and calamities here. So there is no need to worry.  I will protect you with my life!"

"I see," Fleur sighed in amazement. "I trust you, dear. Are we almost there?"

"Yes, madam," Van said gruffly. "Just a bit farther. But hurry. The sounds of fighting seems to have stopped. We don't have much time."

The party fell into a grim silence soon after that, trudging along through the narrow passage anxiously. Like Van had pointed out, the rumbling coming from the castle seemed to have ceased, which meant that the undead swarm had probably already dealt with what had been left of the human resistance. It felt like the calm before the storm, and the silence had the group on edge.

"Over there!" Lord Alan suddenly yelled with excitement, pointing at the wall of the tunnel. "We're here! Move aside." He pushed up past Jon to go up front and felt at the wall carefully. "Hmm, indeed, here it is." A secret mechanism seemed to have been triggered, for a magic circle suddenly lit up on the wall, rising up out of the stone as if it had always been there.

Fleur raised a brow at that. Even she hadn't felt the magic hidden in that wall. It was truly a sophisticated cloaking magic…No wonder he had been bragging about it earlier.

"I hate this part," he grumbled as he took out a small dagger from his waist. "Why does it always have to be blood? Always blood. I swear mages must be masochists..."

Lord Alan hesitantly made a cut on his thumb, and with the oozing blood started to draw over the circle. But he didn't follow the existing lines, instead drawing a new one over it. The blood seemed to seep into the wall and disappear as he drew, and the magic slowly started to glow crimson.

When he was done, the circle glowed brightly once before seeping back into the walls once more. The smooth wall where the circle had once been started to distort as if melting away, and a large cavern was revealed. At the sight of the entrance, the lord and his knights seemed to let out a sigh of relief. The knights entered first, then Lord Alan gave Fleur his hand so that they could enter together.

"We made it!" Lord Alan yelled, as the entrance closed shut behind them. In his happiness he turned around and planted a kiss on Fleur, then raised her up and spun her around. "See? What did I tell you? I told you I would protect you. Now we just need the artifact, then we can take back the castle."

Despite his many flaws, Fleur could see a familiar yet foreign hope in the young lord's eyes. She'd spent the last year with him as his fiancée, and though the man was spineless and as arrogant as nobles can be, he had treated her well, exceedingly so. She could almost see the future he was imagining with her in his eyes. An extravagant marriage. A luxurious, comfortable lifestyle. Children. And maybe grandchildren.

"Yes," Fleur laughed happily, with her arms around his neck. "You did."

Then there was a crack.

Lord Alan's eyes widened and popped. The happy grin on his face still hadn't faded, but his headless body crumpled to the floor. Fleur cradled his head, and even patted his cheek again as the light in his eyes started to fade. "Thank you, dear. You were very useful." 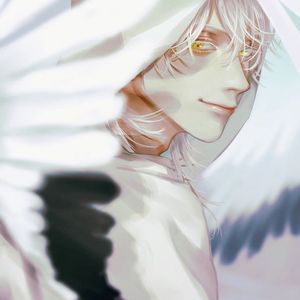 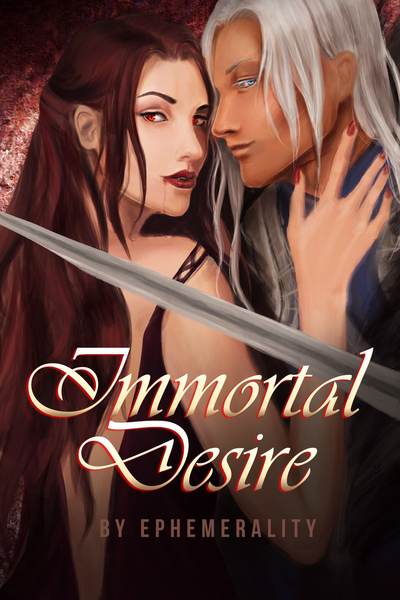 Only one cure, but two desperate souls. Can they be lovers? And who will sacrifice everything for the other to live?

A blood-sucking, beautiful, and heartless demon. That's how the humans would describe Fleur, one of the ancient vampire purebloods. Yet she longed for a way to cure her vampirism or to sate her growing hunger before her vampiric nature consumes her—and turns her into a mindless monster.

Crown prince Adrian—the troubled Emperor-to-be—has his own demons to fight with. Dying from a mysterious illness deemed incurable by both magic and divinity, he sets out to find a cure.

One desires mortality, while the other desires life.

Their fates cross when they join an expedition of heretics to explore Ladvin's Vault, said to hold the legendary Panacea, the cure of all their problems. But there’s only one cure. Who will gain what they desire at the end?

Will the spark of love be their salvation?
…Or will it be their ruin?
===
Join the discord to hang out, updates, and extra content:
https://discord.gg/FcunGYeWZA
Subscribe 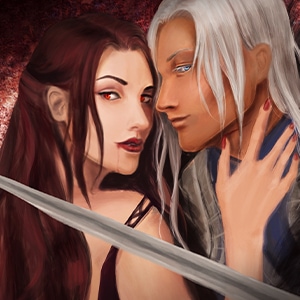