Everyone has their secrets. Mine is just a bit more...extreme than others.

The thug swings his blade, each movement more frantic than the last. Blood is trickling out of his bruised nose, courtesy of me, while his panicked eyes are taking in their surroundings.

"Where are the hell are you?" He bellows furiously, thrashing his knife about a few more times in an act of desperation and horror.

I smirk before kicking his feet out from under him. The thief falls to the ground with a grunt and, while I would happily continue messing with him, I can hear sirens approaching in the distance. Curiously, I look about the alley to find the girl he was trying to mug earlier has already run off. Judging by the lights I can see, she called the cops too. There's no reason for me to stick around so, while the cops come running into the alley, I walk out without a care, unseen by all.

Behind me the thug is shouting about an "invisible force, an alien I'm telling you, an alien" that the cops obviously don't care about.

Well, I guess that's not true since most teenagers may feel invisible but that doesn't mean that they actually are. I, on the other hand, am both, in the metaphorical and physical sense.

I've never met anyone like me, someone who can disappear and reappear in the blink of an eye. I guess I'm not totally average but no one would see me as anything special otherwise.

Sometimes I want to be anyone other than me.

Mom doesn't get that. She never has, always spouting about how I'm already special, that I'm already unique, that we all are and wishing to be someone else is only going to hurt us in the long run. I get her point, really, I do but...sometimes it just sucks.

I hesitate in the unlocking my front door, glancing to my left at Leo standing on his porch next door. His short blonde hair is dripping with sweat and, judging by the gear he's carrying, he's just gotten home from soccer practice. He gives me a smile; one that he'll give to anyone. He's just too nice not to acknowledge others.

"You're home late," my neighbor says, sitting his belongings on the porch. I hum in response, giving him a quick nod before walking into my home. Our conversation ends as quickly as it started.

Sometimes it's kind of annoying, other times he's kind of cool.

"Where have you been?" Mom asks when I walk through the door. She's standing in the kitchen with her hands on her hips, a stance that means a lecturing is on its way. Damn, haven't even taken my shoes off and I'm getting nagged. Is this a record?

"It doesn't take that long to walk home."

Mom scowls, probably for my language and the fact that she knows I'm lying. Her green eyes (that we share) narrow on me as if to say "cut the bullshit." She knows me too well. I don't know why I bother lying to her anymore. Second nature, I guess?

"No one saw me," I sigh, finally kicking off my shoes while averting my gaze.

"It's not just about people seeing you, Micah."

Mom is following me up the stairs. I don't know why I bother trying to get away from her. Shutting my door doesn't help either because, like me, mom has her own ability and that is...

She walks right through it.

I huff and turn to face her. "We agreed that you are not allowed to just waltz into my room. You have to knock and-"

Mom raises her hands in defense before I even finish, turns around and walks back out, only to knock and walk right back in. I flip her off for that, which earns me a smack to the head real quick. Unfair.

"This is serious, Micah. You are going to get yourself into real trouble one day. I don't want you jumping into situations where you can get hurt. I'm not saying this because I don't care about people but...sometimes just because you can do something doesn't mean that you should."

"Mom, it was one thug. He didn't even see me coming." I grin at my own joke that has mom rolling her eyes. What? I thought it was funny.

I say that every time and every time it's a lie. Mom knows this, it's why she always gives me a look, the look that says how much she wants me to stop, how much she needs me to.

What's the point of our gifts though if we never use them? I've asked it before and never got a real answer. It changes all the time from something almost heroic sounding, "it's fate, one day you'll need it, Micah, and on that day you may use it," to something totally annoying like she said before, "just because you can do something doesn't mean that you should."

I don't understand how mom doesn't feel the same. When I ask what she did in high school with her gift she always replies with, "Nothing." I almost want to call her out on her lie because it has to be a lie, right? Surely it is. She had to have moments, had to have times where she said, "Fuck it," and did what she had to because it was right.

I never say it though, never ask more because I know she'll say whatever she can to keep me safe and if that means lying to me than so be it. In a way, I get it. At the same time, I really don't.

"Clean yourself up and do your homework, dinner will be done in a bit," mom sighs, seeming to realize that there's no point arguing with a brick wall (that brick wall being me). She leaves my room with one final desperate look over her shoulder that I hope my smile will ease. It doesn't and she leaves by...walking through my door again.

I'm not even going to point it out, whatever.

Sighing, I do as I'm told and clean myself up by washing my hands and changing from my slightly sweaty clothes to some comfortable sweats. I linger in the bathroom for a moment, my hand resting on my clothes that, when I will them to, disappear then reappear over and over like I expect it to suddenly stop. Sometimes I think it just might, one day I'll wake up and this power of mine will be gone. I'll wake up and realize, somehow, my whole life has been a dream, like one of those conspiracy theories saying we're all living in a video game or some shit.

It sure feels unreal. Growing up with this so called "gift" but not being able to tell anyone has always been a pain. Mom couldn't let me start public school until I was eleven. I didn't have this power under control. I'd disappear at random so we couldn't risk it. Yet another thing that sparks the same question over and over.

While I'm doing my homework I'm not really focusing on it, not that I ever really am. It's so hard on days like this, when I use my power for good, my brain won't shut up. It's like every sense in my body is on high alert, it stays that way for some time and I'm not really sure why. Is it because I want to do more? Be some vigilante that runs around the streets like Batman but very gay and, sadly, not filthy rich? Who knows.

It just feels wrong, wrong to waste it, whatever this is. What I have, what I can do, it's in our genes. Mom says it's been in our family for centuries, further back than anyone can remember. Mom has it, my grandfather had it before her and his great uncle before him. Each gift is different and each one makes me want to ask why. Now I have it and...none of us have ever really done anything with it so what's the point?

Where did it come from? Why did we get it? Are there others? What is my purpose? Why does no one else seem to care?

It almost feels like a test of will. How long will I last before I break? Because I can feel myself teetering on that edge. I can see the drop, see the darkness waiting beneath my feet and that scares me.

Hey guys, I hope you enjoy this story, which I must first say is more than just a romance. It focuses on Micah and his ability a lot so romance is more of a sub-plot :) Also, it isn't exceedingly long, a total of 20 chapters plus a special ep (some ep might be cut cause of the character limit but I will just update twice if that happens) This will be updated twice a week, once on Saturday and once on Wednesday.

Another series of mine will drop on Monday so look out for it!

Also, this series is already complete on my Wattpad account, however, I figured I'd add it to Tapas too and build some more audience. Anyways, let me know what you think and please still add this to your libraries, vote, just check on it here on Tapas even if you go to WP, thanks! :)

Batman but very gay and not filthy rich... Isn't that Deadpool??XD already hooked, this is amazing!! 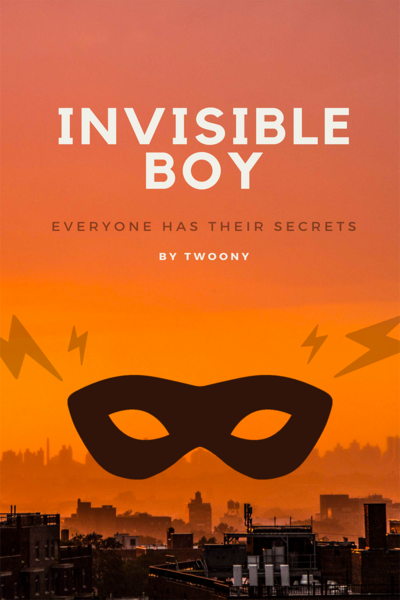 Micah Greeneway is invisible. Not the teen angst kind but actually invisible. It’s hereditary, a family secret locked up like Area 51, but that’s not really how Micah rolls. Even with his mother’s disapproval Micah continues the vigilante life style. After all, it’s not that dangerous, right? Because no one can see him coming, literally.

Except being a vigilante isn’t as glamorous as Hollywood makes it out to be. Suddenly Micah not only finds himself being noticed by the soccer boy next door but also some unsavory characters that want to abuse this so called gift to commit a heinous crime. Now Micah has to juggle keeping his friends and loved ones safe while also maintaining his own personal morals. It’s time for Invisible Boy to step up and be a real hero or watch all his hard work disappear just as quick as he can.
Subscribe 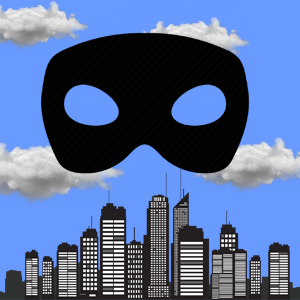