Sonata had drifted in a black void for what seemed like days. she was unaware just sleeping in her bed could lead to this state of mind. She had been neither awake nor asleep and with no need for food or water she just drifted among the endless sea of blackness. How long has she been here days, weeks. time could be relative in this place.

Though it was a boring scene she enjoyed the silence. The thought that colors would blind her sight when she awoke disrupted her serene mind. Colors had become a phobia after she had lived in her adoptive parents house (due to bad interior design), as a result she was forced to wear glasses painted with thick black paint. She couldn't see, but the end of non stop shaking was a great sacrifice. If her life where as enjoyable as it is now, it would be bliss.

Suddenly a speck of light appeared growing larger in diameter as it swallowed the surrounding darkness.

Her heart sank, as her hopes of never leaving smashed before her eyes.

She groaned with disappointment. She was going to return to a world of hopelessness. well on a positive note, at least she had a nice nap.

A bolt of light passed her in the opposing direction with little resistance. Though she did not know how, she somehow felt a connection to this light, yet it felt distant. As contradicting the thoughts seemed in her mind her heart understood this like instinct.

She woke up but dared not open her eyes. She had left her bliss and was now trapped in reality. But, hearing her maids urgent voice showing signs of worry made her rethink opening her eyes. Opening her eyes was like accepting reality, a reality she wanted to throw away. As if in reply to her maids frantic actions. The sound of fast paced footsteps reverberated off the walls of the room.

"Call a doctor for the young miss, immediately"

Sonata ears perked up in response, if there was one thing that she hated more than colors, it was attention. A doctor coming at request for a young miss of the house, Mo’nique would attract undesirable attention pointed at her. As much as she didn't want to accept reality, she had to open her eyes.

The maids usually stern expression, had melted away in worry. Sonata smiled as she sat up the best she could while being in a dress. Looking around Sonata felt something was missing from the room.

"Did somebody paint the walls gray in this room?"

The maid lifted her boney hand to sonatas forehead. After releasing her hand she looked at Sonata with deep thought and concern.

"The room hasn't been painted recently, miss are you sure your alright. First you talk about being a boy and now this"

Sonata stared at the floor in thought. When did she think she was a boy. The maid did not seem to be lying, could it have happened when sonata was asleep? Mabie. Trying to force the memory into view was obviously not working and waiting for it to appear seemed hopeless. Though the comment seemed familiar she couldn't make sense of it. It's best for her to not focus on the matter at this time.

Though she had realized her sight had the absence of color, she felt a sense of relief. With color gone from her life she felt more secure. Sonata could care less how this miracle occurred. She was at peace that is all that mattered.

"Will miss be fine, we can call the doctor if you feel ill" the maid said

'I will be fine! I was probably still waking up. Could you wait outside for me I need to clear my head". Sonata gave a awkward glance at the door. Hinting the maid to leave. Her maid nodded in reply and headed out of the room. The door closed behind the maid with a quiet tap.

“finally I can be at peace” sonata sighed in relief

She had finally been rid of her trauma, And was free in a very unprecedented way.

[Someone there?] sonata said sternly

She gazed around the room cautiously till her eyes met with a peculiar boy. With vibrant pink hair and sky colored eyes and a peculiar hat. it wasn't very hard to pick him out of the gray room in fact he seemed to be the only thing that had color.

As she gazed at this boy with piqued interest he suddenly vanished from her view without a trace.

“Miss sorry for the interruption but lunch is ready the mo'nique family has asked for your presence.”

“Tell father i will be right there”

“Miss your missing your glasses you tend to where will you be alright?” the maid verified

“Yes i will be fine!” sontata gave an awkward smile to ease the maids curiousity

“If you say so miss. lunch will be at 12 will you need help getting ready?”

“I should be fine! let father know i might be a little late”

As Sonata switched her clothes a thought crossed her mind, was she forgeting something. Surely that had to be the case. 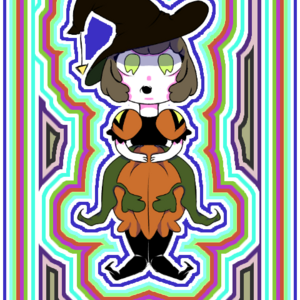 Thanks! Updates every Monday, wedsday, and Saturday 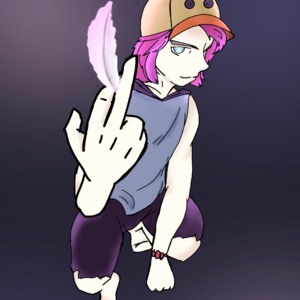 A story about good and evil and the subtle warped truths used to desire us. 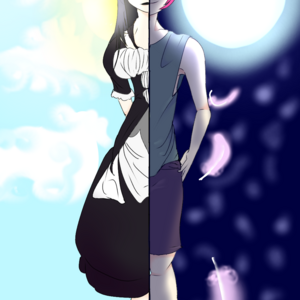