My name's Scout Frost. I've got super long dark brown hair with auburn streaks and I have a pretty good build, slightly athletic, slightly thin, and 100% comfortable. My skin has a pale pallor and I have the best hazel green eyes.

I'm from Pepper Pond, Utah, but I'm currently spending the summer at my aunt's house in La Jolla in Cali. Boring? Never! My aunt is the coolest person on that side of the family!

I got up that morning and made a beeline to the bathroom, showering and getting ready as quickly as possible before heading into the living room. My aunt was in the kitchen making breakfast. The smell of food in the air, caused me to stop in my tracks and go to the kitchen instead of the door.

"Hey, there, Scout!" My aunt Stella greeted with a smile. "How'd you sleep?"

"I slept really well after that plane ride. What about you?" I asked.

"I had a good night's rest, thank you. Now, how about some chocolate chip pancakes for breakfast?" Stella asked, scooping one off of the griddle she was working on and putting it on a plate. She pointed to a shaker of powdered sugar and winked.

Now, you see, I'm not supposed to have a lot of sugar, Mom's rule. But, let's face it, Stella was really cool about stuff like that.

I savored every bite of my scrumptious breakfast and thanked my aunt before asking to go to the beach. "Sure thing, Scout! Just be sure to have fun!"

With a grin, I promised to enjoy myself and waved before heading out the door. I snagged a backpack off the steps of the porch and ran off, on the way to the beautiful beach.

It wasn't long before warm sand was under my feet and cold ocean waves were above them. There weren't many people, and considering it was 9:30 AM on a Thursday, that made a lot of sense. I closed my eyes and let out a happy sigh.

"Likin' the water, huh?" I heard a male's voice ask in an Australian accent. I turned to see the owner, a boy who couldn't be older than my own age of 17 with light red hair, that had to be natural, considering his soul patch was the same color. His chest was bare, but he was, thankfully, wearing a pair of shorts and not a speedo. He had sun kissed skin and bright blue eyes. And, that's not even mentioning his well toned body.

"Yeah! My name's Scout, what's yours?" I asked, smiling brightly.

"Melbourne, Melbourne O'Riley." He responded pleasantly. "It's a pleasure to meet you."

"Same to you." I replied, sitting in the sand. Melbourne sat next to me, not too close, and gazed out to sea.

"Have you ev-a' wondered what exactly's on that island out there?" He asked me with a spaced-out look in his eyes. I looked out to where his eyes were pointing and saw a small island with a mountain on it.

"No, in fact, this is the first time I've seen it." I said, trying to focus my eyes on it.

Melbourne suddenly stood up. "I've got my boat if you wanna head out to it."

First things first. "Sure, just let me text my Aunt so she knows where I am." Melbourne didn't argue with this, so I figured it was probably safe.

Going out to an island just off the coast, call me every 30 minutes, please?

Melbourne led me to his boat, which was on a dock not too far away, and gave me a lifejacket before we got in. "Don't you need one too?" I asked as he started the engine.

"Nope, I'm the strongest swimmer I know." Melbourne told me before untying the boat and setting off for the not so distant island.

I honestly enjoyed the breeze in my face, the smell of salt on the air and the light spray that hit me from the ocean. Looking over the side, I gazed into the water and saw a slip stream underneath us. Maybe there was a pod of dolphins underneath us!

Once we reached the island, we beached the boat pretty far up, and considering that high tide was yet to come, that was a smart decision. Dragging the boat ashore was a pretty tough task, but it would have been tougher had Melbourne not been there. We finished up and began to hike up and into the brush of the island.

I heard voices as we climbed up the hill before us and they got louder as we went around a large rocky outcropping. Then, I caught one of the best views of my life. A huge waterfall stood before me, crashing down on a pool of deep water in which we could see a rippling reflection of the sky. Wet moss was clinging to rocks, and sea spray was on the air.

In the pool below were four people, which Melbourne approached with gusto, plus me following close behind. "Ello there!" He greeted. The people looked up at us as we approached, and I had to admit, one of them really caught my eye.

She had an intense black pixie cut and light brown eyes that were shining gold in the sunlight. She had a thin build, not really curvy, but not flat either. Plus her somewhat tanned skin suited her just perfectly. Holy heck, this girl was hot!

While I was gawking, I heard Melbourne clear his throat. "Scout, it's your turn to introduce yourself."

"Oh!" I exclaimed, taking my eyes off of the cute one and looking at everyone else. "My name's Scout." I said, resting my gaze on each one of them to get their faces down.

One of them spoke, a boy who looked like he was in his 20's had a thick chinstrap beard and strangely gray eyes. He had a bulky and muscular build with broad shoulders and an angular face. His jet black hair was styled and his facial hair was well groomed.

"What brings you two to the Island of Secrets, my dudes?" He asked in a relaxed manner.

"Island of Secrets?" I responded. "Which scientist named it that?"

They burst into laughter and the boy swam closer. "I wouldn't call us scientists, but we named it that for sure."

The hot girl chimed in with a smile. "I'm certainly not smart enough to be a scientist, in fact, none of us are." She laughed. "Oh, by the way, my name's Karissa." She then pointed to the dude. "That's Kody." Karissa gave a gesture to a blonde with green eyes and a sharp jawline along with a button nose. "And that one is Luna."

"Hey! What about me?" Another girl asked indignantly. She was a brunette with another set of green eyes. And, man was this girl tiny! She couldn't be more than five foot two, and was toothpick thin. Her features were somewhat soft and she was getting pretty tan.

"You told me not to introduce you!" Karissa said incredulously.

The brunette smiled. "I know, I'm teasing." She said without shame. Her focus turned to me and her smile grew. "My name's Rose."

I gave my best simper back. "It's really nice to meet everyone!"

"Mind if we join you in the water?" Melbourne asked.

"Well, we don't own the place, of course we don't!" Karissa responded.

"Jump right in!" Rose told us.

Melbourne cracked his knuckles. "Alright!" He cheered before jumping in the water, effectively splashing me and everyone else for that matter.

I took a deep breath and hopped into the water, quickly coming up for air. "Holy crap! It's so cold!" I cried out, trembling.

Melbourne laughed. "C'mon, Scout, it's ocean water, what do you expect?"

"You have an excellent point." I laughed softly.

We swam around, played games and had a splash war, all the way until the sunset came upon us. At that point we were sitting on the sand at the edge of the pool, relaxing and looking out on the island. The full moon was rising in the sky as we laid down.

"You guys up for one last run in the pool?" I asked, looking into the water as the moon's reflection began to creep into it.

"Oh, you know it!" Karissa said excitedly. We got up all at once and jumped in, starting to splash at each other once more. There were bundles of laughter and it was refreshing to have to cold water hit my skin. I dove under and popped up to splash everyone around me to the enjoyment of everyone.

That's when the moon hit its peak over the pool. The water began to glow and we were all sucked under by some invisible current. Air bubbled up around us, and I was struggling to surface as I felt something strange happening. My lungs burned, I lost all feeling in my legs, my eyes stung, and eventually my mouth opened and I took a deep breath of... Water?

Hold up, how could I be breathing? I stopped struggling. I looked down to see a long, flowy tail where my legs should be. Bright light filled the water and illuminated my new appendage. The large fish tail was a dark violet with black accents on the loose fins. Wait, my fins.

Maybe it was time to freak out.

But, instead of freaking out, I blacked out. 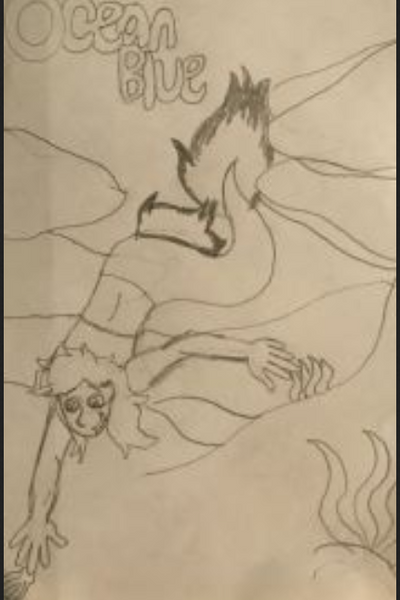 Scout Frost is staying the summer with her aunt in La Jolla, little does she know that magical mischief abounds on a nearby island, and she gets caught in the crossfire!
Subscribe 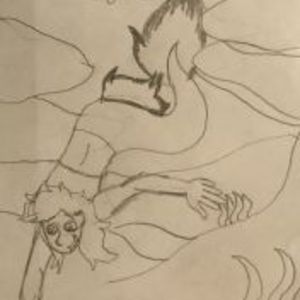