The sun broke through the trees as a squad of four Knights made their way through the inner layer of forest. The harsh air cut through them with razor sharp cold. The lows of winter had just begun and it was the coldest day that any of the young Knights had ever experienced, yet they pushed through, armour rattling in the wind along with there teeth.

In the distance a small break in the forest emerged, the dirt had been recently disturbed, the hunt was on. The youngest of the Knights leaned down to feel the earth in his bare fingers. It crumbled away with ease.

“Theodore, come look at this,” the young knight rose and held a small black flower to Theodore's face. The unkempt man snarled and knocked the flower out of his hand.

“If you're going to ram shit in my face Isaac, you might want to explain why you're doing it first.”

The young man stammered and fell to the ground searching for the flower again.

“It's a Grey Lotus, you ass!” There was a long pause before Isaac let out a sigh. “It's used for the same poison we found in the Outsiders house.”

The group looked at each other then back to Isaac blankly, before the tall female knight spoke in a soft voice: “Isaac, would you care to enlighten us as to why this is important? A flower is a flower right? Of course it's growing out here.”

He stood back up, flower once again in hand. “It's not just any flower, Sofia, it's rare, chances are our killer used flowers from this location to make his venom.”

Theodore stepped forward, removing his spear from his back carefully. “So the killer's here?”

Isaac smirked. “Or was at some point, yes.”

“Put it away” said Sofia, pushing Theodore's spear to the ground.

A shuffling came from the bushes to the east of the group, Theodore raised his weapon once more as Sofia took a step back. Finally the leader of the group moved forward and gestured for Theodore to calm.

“Whose there?” Called their leader.

In response a man stepped out of the shrub. Naked, covered in cuts, with his eyes held open with black pointed twigs, a grin stuck to his face.

Sofia let out a small squeak as she saw the man, she quickly reached for her short sword before her leader grabbed her arm, stopping her completely.

“Who did this too you?” she called out questioning the man once again.

Isaac turned to his squad leader “Why are we trying to communicate with this thing Ishizu, look at it! He's probably the killer.”

Ishizu didn't take her eyes off of the wounded man, but spoke softly to Isaac, “I don't work with probablys or guess work Isaac, you should know this by now.”

The strange man took a step forwards his looming grin growing wider the closer he got to the group. In a strained, painful voice he shrieked out.

“Run, Run, Run away!” On each beat of his voice he got closer “Run away from me!”

Sofia drew her sword, fear gripping her heart. A madness in her eyes.

“Get back!” She screamed at the man.

Theodore looked at her, puzzled at this sudden outburst.

“Whats wrong with you?” he calmly questioned.

“What rank are you?” she paused, Sofia didn't answer, her eyes locked on the man

“He's clearly ill” her voice gained a tone of anger as she tried to reason with Sofia.

Sofia grew in to a rage “If you're all going to stand there I'll do it!” she yelled as a bolt of lightning left her body, through her blade and launched itself at the man.

As it burned down the path towards him, the forest surrounding them burst in to flames. The fire licked across the ground as the bolt finally hit the madman.

As the smoke cleared. The fire grew. As the fire grew it became clear that the madman was unharmed.

Ishizu grabbed Sofia's collar and dragged her up so they could see face to face.

“What the hell are you doing! You're lucky you missed!”

Sofia struggled to get free as the madman started to laugh, his steps getting faster.

“What the hell are you doing!? He's going to kill us all!” Sofia responded.

By now the man had broken in to a run, the gap between him and the group getting shorter by the second.

Isaac took a step back and placed his hand on the ground.

“He's coming this way!” Vines poured out of the ground and wrapped around the charging man's legs and hips. Before they could bring him to the ground, they snapped, setting him free once more

“What the-!” The man leaped on to Isaac, opening his mouth inhumanly wide and biting down on to Isaac's neck, blood squirted from the wound and covered the floor. Isaac's screams only drowned out by nature burning around them.

Theodore panicked and drew his spear back, plunging it in to the man's bare ribs. He had expected this to kill the man, or at least harm him, instead the spear snapped at the hilt and the head of the weapon shot in to the air. Isaac's screams finally stopped. In the mist of this attack Sofia had gotten free of Ishizu's grip and was readying herself for another strike.

Before she could though the man suddenly switch his focus, grabbing Sofia by the throat and holding her in the air, his grip tightening around her windpipe.

She gasped and kicked her legs, desperate to get free.

Ishizu looked around at the ensuing madness of the battle. Her hand rested on the hilt of her sword. She took a breath in. Searched his body for weak spots. And striked. Her blade cut through the air so quickly that she matched the sound of a thunderstorm. As her sword hit in to the back of his neck the shockwave from her blow threw itself up her arm, shattering the bones within it.
A cry of pain left her lips as she let go of her sword and collapsed on to the ground.

A crack. Sofia stopped struggling. Her body fell limp. She struggled no more as the man released her at last.
Finally he turned his focus to Theodore who had started to flee the battle. If he could get out of the forest he'd be able to send up a signal for help. The same signal they had followed to get here. Behind him he could her the gentle footsteps of the madman pursuing him. He reached the threshold between the forest at the Outsiders makeshift town. He went to send off a signal when a sudden pain shot up his back.
Then darkness. 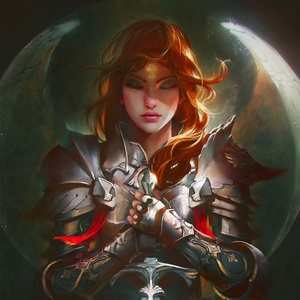 The intro to silver sword, we follow a small squad of 4 as the investigate a recent murder outside the walls. 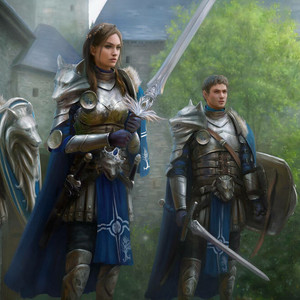 In the world of Dekira nothing is safe. Outside of the large walls of the grand city of Luition is a world teeming with monsters, killers and barbarians.

To combat this growing threat and to grow the boarders of Luition the great lords of the realm have created "The Academy" an order of 1000 knights in training that offer there lives to defend the people of Luition.

Knights are ranked from 1 to 1000, the higher the rank, the higher the rewards. The Silver Awakening follows the journey of Alice, as she joins the Academy and finds that knighthood isn't all about honor and glory...
Subscribe 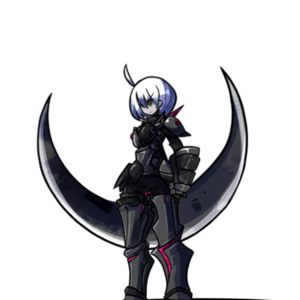