The sun was too bright.

Robin squinted, blinked, felt something pull at the skin of her face, and squinted again to make sure she hadn’t imagined it. She sat up, felt fresh grass shift beneath her, and touched her face.

She was wearing a mask. It covered from temple to temple across her eyes, held by some adhesive that allowed for movement despite the drag. The material it was made of might have been metal, plastic, rubber, or some combination of all three; her fingers couldn’t tell which.

Whatever it was, she had not been wearing it when she went to sleep, nor had she worn the fingerless gloves that now covered her hands. She didn’t even own fingerless gloves. Actually, she couldn’t remember going to sleep either. Her body felt odd, tingly-numb and lighter, with the weight shifted to odd places. She looked down.

Those are new, she thought, staring at the red hoodie and jeans that covered solid curves and a defined bosom. Then it finally registered that she was sleeping in an open field with no memory of how she got there, and her head snapped up to investigate her surroundings.

“What the fuck,” she said out-loud.

She was not the only one.

All around her, dozens — no, hundreds — of people were likewise waking up. They were scattered across the neat lawn and pristine sidewalks of a huge public park, with only a few feet of space between each prone form. Some lucky souls were laid across benches or under trees. Others had been dumped onto the hard concrete, into branches, or atop garbage piles. Nearly all wore masks, some over the mouth and nose, others across the eyes, and those who didn’t had tiaras or scarves or other elaborate headgear that called attention away from the face.

In the near distance, gleaming skyscrapers rose over treetops and fountains, stretching up into an endlessly clear blue sky. Their lines formed the edges of the park, and Robin knew that if she stood and looked, they would come together at three points, forming a triangle.

She knew, because only a few meters from where she lay, the grass became sidewalk leading to a fountain, which likewise formed an equilateral triangle in the dead center of the park. Atop a dais in the center of this fountain stood a golden statue of three towering figures, each facing out with their backs to one another and their shoulders touching.

The first, facing mostly north, hid his face beneath a sandogasa hat and his body in a dramatically flowing cape. The second, looking south, was a woman in a blindfold holding a pair of scales, her other hand extended to welcome all who approached. And the third man, turned due east to greet the rising sun, stood tall and broad with his cape tossed back, handsome face shining with a thousand-watt smile. The living symbol of hope and justice himself.

Robin knew these figures. Knew their names at a glance: Shadowman. Lady Justice. And the Beacon.

She knew this place, too. Knew it as intimately as her own bedroom.

She was in Golden Ratio Park. The heart of the Golden City, home to the International Assembly of Heroes and starting spawn-point for all new players of The Golden Age.

But this wasn’t like playing the game. There was no sense of sitting at her computer or steering her character through the hard plastic and tough rubber of the haptic rig. No. Here, she could feel the grass, taste the air, smell the metallic tinge of water through the fountain’s pipes.

She and all the hundreds of people around her had really, truly entered the world of The Golden Age.

A hugely popular massively-multiplayer online role-playing game, perhaps the most popular to ever deviate from the juggernaut genre of high fantasy.

Released six years ago for the cutting-edge VR PC, its haptic interface transports players into a world of adventure, where anyone and everyone can become a true hero.

But that transportation was supposed to be metaphorical. A figurative escape, not a literal one. 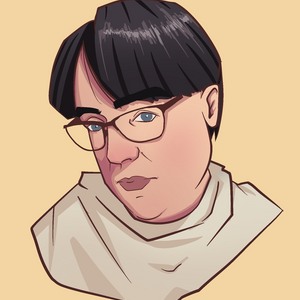 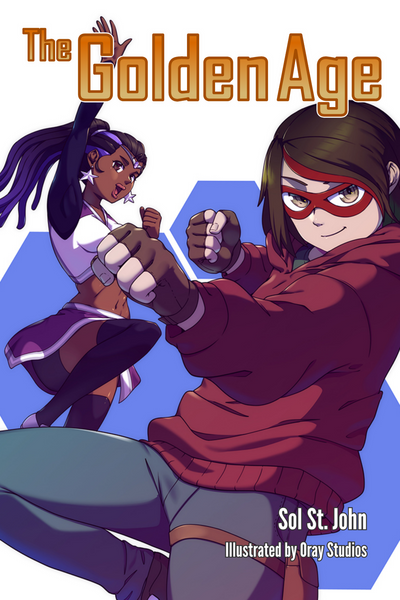 Welcome to THE GOLDEN AGE

The popular MMORPG that draws its players into a world of super-hero adventure. But when thousands of those players are actually drawn into the world of the game, confusion and mysteries abound. Why were they brought here? And is there any way to return to the real world?

Luckily, Robin Sinclair is Knightblade, one of the game’s top-ranked players and a founding member of its most respected players' guild. Unluckily, she was brought into this world as her alt account, a nameless level 3 newbie with no powers, no gadgets, no place to stay and no influence on the new world, with her own reasons for keeping her head low and her distance from her old friends.

To get by, she teams up with three other noobs — good-natured Tisha, sardonic Will, and bright-eyed Carter (who is way too young to be playing this game) — to eek out an existence in a world ruled by comic book tropes and video game logic. But for true heroes, those with the will and drive to defend others even at the cost of their own safety, there’s no resisting the call for long…
Subscribe 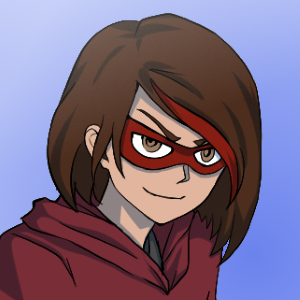