The early morning was still and peaceful. A lone maiden sauntered through the sleeping forest, where the reigning silence of the night was slowly disturbed from its slumber by the tiny twilight embers. The maiden hummed as her delicate fingertips brushed against the tree trunks as she walked, curing the decayed. Her bare feet treaded through patches of dirt, giving way to new life from beneath the soil.

Birds took flight as the tree branches rustled with the cool morning breeze. She looked up to gaze at the fading gleam of the pearly moon.

The morning dew that peppered the maiden's hair reflected the reddish hues of the sun, resembling rubies against her jade green hair. Strands of hair were wrapped around strong, root like horns. Her moon-kissed complexion held a gentle glow that glistened like the golden hues of her eyes.

Her musing was interrupted by a raspy, deep voice.

“Illya, my dear, where have you gone?”

She spun on her heels to run to the voice, colliding with a strong figure before her. An inky black hand grabbed her arm.

“You must be careful, my child.”

The figure was a tall man, with long limbs. His skin was pale like the moon but his hands were dark like the night sky. He was thin but lean compared to most men, who were stocky. Crimson robes trimmed with gold swathed his body; glimpses of violet markings could be seen on his partially exposed chest. A mane of long jade hair flowed from underneath a mask made from the skull of some unknown creature. Sturdy root horns spiraled from his head.

The obvious tension within the man’s shoulders dissipated as he let out a sigh. “I know it has been three days since your reawakening but you can’t be running off like when you were a child. You have responsibilities as a priestess to perform.” he explained. He examined his daughter’s overall appearance; the shroud she wore provided barely any coverage and her long hair was a mess.

Your mother would have my head if she ever saw you like this.

The kingdom of Tarlo was bustling with life. Even the outskirts were beaming with activity. It was high noon while farmers still tended to crops and livestock, children played under the watchful eyes of their elders while the mothers took care of the clothes and food. Within the city walls surrounding the palace, merchants were busy selling their wares while the streets were full of citizens with smiles on their faces. The people led such content lives.

A lone maiden clad in white walked down the busy pathways. Her apparel was simple and modest, with long hair cascading passed her waist. Three beauty marks dotted her delicate face, one under right eye and two under the left of her bottom lip. People stared and children followed, grabbing onto her hands and smiling. Parents gathered their kids, telling the young woman they were sorry. A slight grin graced her lips as she made her way to the palace.

The kingdom itself had prospered in a time of peace since the current king ascended the throne. King Zeiil was a kind man who’s charisma and intellect helped his people countless times. Regardless of his royal status, he enjoyed the company of the citizens. Sometimes, he’d allow the children to play in the courtyard if guests weren’t around.

The young woman halted momentarily at the front gate before crossing the threshold. Servants bowed as she passed them. She walked effortlessly throughout the palace as if she knew where she was going. The courtyard was empty except for the king, his advisors, and one other person. She didn’t recognize the man nor was he from Tarlo. A hand rested on her shoulder.

“What are you waiting for, my child?”

She grabbed the hem of her tunic, staring at her feet. “What if he doesn’t recognize me, father?” she asked. “I mean, it has been five years and I don’t look the same anymore…” she trailed off, lost in thought. The man could clearly see his daughter’s frustration, he sighed yet again. He stepped forward, towards the king.

“F-father! What are you doing?!” she whispered, tugging on his robes in vain.

“You must never hesitate. You must hold your head high.”

The sight of flowing crimson robes, a color considered sacred, caught the king’s attention. The tall, looming figure was a familiar one. He rose from his seat and knelt. “Mikhai, what a pleasant surprise!” he said. The man raised his hands, urging the other to stand. “A king shouldn’t kneel for another…” he stated. Zeiil straightened up.

“For you, I will show undying respect. After all, you hold status above my own and you were my dear late daughter’s husband as well.” he paused. “Come to think of it, you rarely ever leave the forest…”

Mikhai cleared his throat, stepping to the side.

Zeiil stared in disbelief. For a moment he thought he was seeing his late daughter, Ishta, but he knew better. “Illya?” The young woman gave a sheepish grin. He reached out to embrace the woman. “Oh, my sweet grand-child!” He held her at arms length. “Look at you; you look just like your mother!” he stated.

“Um, your majesty?” The foreign man stammered. He was slightly dumbfounded by the strange guests that had interrupted their meeting. “Ah, forgive me. Tell your king that we can discuss matters in person at the festival in four days.” he paused to give Illya a soft smile. “Right now, I would very much like to spend time with my precious grand-daughter.”

“But sir-” The man approached Zeiil but was intercepted by Mikhai.

“Come, I’ll make sure you are escorted through the forest safely.”

The man tried to protest as Mikhai ushered him away but he gave up when the king wouldn’t listen.

“Would you walk with me, my dear?” Zeiil asked, offering Illya an arm which she gladly took.

The palace was lavishly built from marble and granite and decorated with the finest of tapestries and gold adornments. Zeiil led Illya throughout the palace, reminiscing about her days as a child running through these halls. How carefree her mother was while playing with her.

“My, when you’re father said he would speed your growth, I didn’t imagine it was possible. But look at you! A young woman in full bloom! And in the span of five years, no less!” Zeiil exclaimed, astonished by Illya’s visage. He cupped his grand-daughter’s face gently in his hands. “You’re just as much of a beauty as your mother was like my dearly departed Estha.” he said, nearly in tears thinking about Illya’s late grandmother.

She never got to meet her grandmother. Illya’s mother would tell her about her sometimes. How she was a gentle soul despite all the hardships she had been through, diligent, clever, and spiritually strong. A complete opposite of her mother. Illya’s mother was strong willed with a fiery temper, passionate, and was slightly ill-mannered. But what Illya had always found interesting was her grandmother’s origins. She was of Daalur blood.

Daalur were a lost race of people closely attuned to the earth and were capable of using magic as easily as breathing. Since they were once so close to the earthly deities, their knowledge of magic comes second nature whereas most have to work hard and learn the ways of magic properly. They were a nomadic race of people, going wherever the land told them to go. They were believed to have been highly favored by the creation deity themselves. This drove most to envy the Daalur so much to the point where they were hunted and sold into all kinds of slavery.

But from Illya’s understanding, her mother was not Zeiil’s child but the product of being forced to serve as a comfort woman. Despite this, the king still loved and cherished Ishta as his own child.

Illya was brought out of her musing. She noticed they were standing before the entrance to the temple.

“Ah! Just the young godling I wanted to see!”

Illya felt a pair of slender arms wrap around her from behind as Zeiil knelt. The king himself only bows to those above him which could only mean this person was…

“Always so stiff and formal as usual, I see.” A chin rested on Illya’s head as vibrant crimson hair cascaded passed her face. “It can’t be helped, you are a Deity after all.” Zeiil explained, raising to his feet. The person stepped to stand beside Illya then a sharp step forward to Zeiil.

It was a buxom young woman with long crimson hair, swathed in elaborate vermillion robes and adorned with numerous gold jewelry. She was tall but not too slender. An ornate smoking pipe was held in one of her hands, raised slowly to lips painted the same fiery red as her hair. She narrowed her steely grey eyes at the king. Smoke billowing from her delicately parted lips and into Zeiil’s face. He coughed in return.

Shivara cocked her head ever so slightly to the side. “Well whatever..” she paused, turning to face Illya. “Come, godling, I have something I need to discuss with you.” 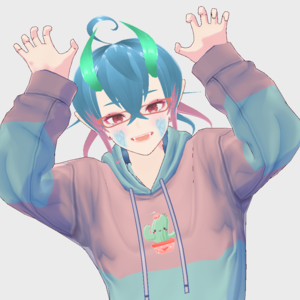 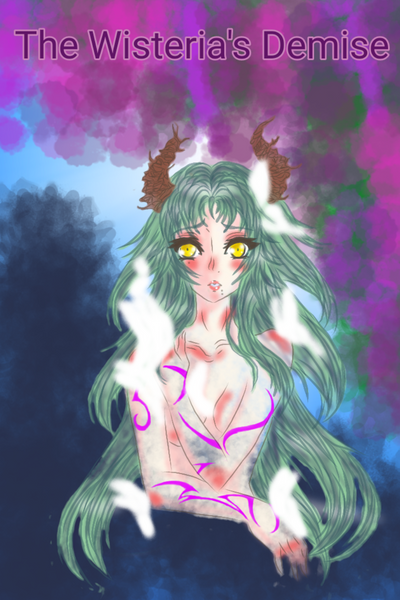 How long had she been waiting? At times it was hard for her to remember. A life that had been filled with sacrifices, duty, uncompromising ideals; followed by a slumber so deep that it seemed nothing would ever be able to wake her up from it.
But even in the endless sleep, she had dreamt, longing for someone to come and find her. Thus, under a tree on a vast field of greenest grass, with endless blue sky - with gentle soft white clouds stretched above; she waited, always waiting for her lover to find her again."

A story about a priestess of a forest and a king of a desert kingdom whose fates are inextricably intertwined for millennia. 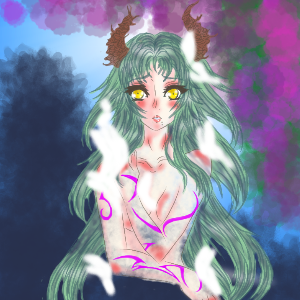