Wanheda and the Ice King

"Where is he taking me?" Clarke Griffin asked herself as she was dragged by the long-haired man in the middle of an empty field.

She kept looking around them in search of any landmark she might recognize, to no avail.

The Ice-nation warrior was clearly in a hurry to bring her to his set destination, which was surely not a good thing for her. Her stabbing him earlier had apparently no effect on his determination.

Suddenly, they stopped at the top of stairs that led in what seems like an underground bunker. The man led her down and tied her to a pole.

The man took his shirt off, revealing his muscular torso. At his hip, the wound that Clarke had inflicted was still bleeding.

Clarke, who was no longer gagged, saw an opportunity to get herself out of this misadventure, or at least give Bellamy so time to find her.

She spoke with a raw voice.

“I could maybe help you with that…”

The man turned to face her, her looked down on her with a rictus.

“So that you can stab me one more time? I don’t think so…”

“Look, I’m sorry about that… but you can certainly understand why I wanted to escape, right? I get now that I won’t go anywhere… so just let me look at your wound, I was a healer back in my camp.”

“I know…” The Ice-nation man squinted his eyes and stared intently at Clarke with his clear blue eyes.

“Fine! But at the slightest suspect move, I will knock you down!”

He kneeled beside Clarke, on his guard, and kept his cold eyes on her as she checked the wound.

“It doesn’t seem too bad, but I need to clean and cutterize it.” She said after a few seconds, raising her gaze to his.

At the moment their eyes met, a spark flickered. Clarke had to lower her gaze again to make the strange feeling dissipate.

Clarke heated the man’s knife in the fire he had lit and returned to his side. She showed him the red blade.

“Just do it!” The man ordered with a hoarse voice.

Clarke slowly applied the scorching hot blade on the wound of the man, who yelped a little between his teeth.

“What’s your name by the way?” Clarke asked, trying to make diversion.

The man stared at her incredulously.

“Roan…” Clarke repeated as she put the knife away.

After making sure the wound was not bleeding anymore, Clarke tore a strand of clothes from her tunic and started wrapping it around Roan’s waist.

The touch of his naked skin was warm and damp, which made her think he was having a fever.

After tying the band of clothes, Clarke raised her hand towards Roan face, but before she could reach his forehead, a hand caught her wrist.

“What do you think you’re doing…?” Roan quizzed, glaring at her.

“Why would you care if I had a fever?” He leant forward, a few inches of Clarke’s face.

The sudden closeness took her by surprise; she couldn’t seem to look away from those icy-blue eyes that pierced into her.

“I- I just... “ she stammered. “I need you to make it alive out there. There are probably other bounty-hunters right?”

Roan kept her left wrist her his grasp, so she touched his forehead with the right. He was hot but she didn’t think he was having an infection.

Without waiting for Clarke to get up, Roan attempted to get up. The sudden movement made Clarke lose her balance and they both fell backwards; Roan on his backside, and Clarke on top of him.

She didn’t dare to move and possibly make the situation even more embarrassing.

It’s the sudden tickling of Roan’s warm breath against her neck that made her straighten up. But the movement was stopped by the presence of a hand pressing on her back.

She was towering the muscular man, and had no other choice but to look straight down into his blue eyes.

Roan wasn’t breaking their gaze an inch, Clarke was like hypnotized by him. And as if he felt her interest, Roan raised his face a bit, almost touching hers. A shudder left Clarke’s lips; and Roan closed the gap between them.

Clarke’s eyes widened and she put her hands on Roan’s chest hesitantly, but didn’t seem to push him away.

On the contrary, Clarke felt something for the first time in a long time: lust.

She kissed Roan back timidly at first, but the hand that had been on her back was now at the back of her head, pressing her into a fuller kiss.

After a minute, they broke their kiss, breathing heavily. They looked at each other with misty eyes.

Then something flicked in Roan eyes; he pulled Clarke’s head back abruptly, gripping her hair. His lips traced Clarke’s neck and his tongue greedily licked her, as if he wanted to taste her.

Clarke closed her eyes and let herself go with the flow.

Suddenly, she felt a hand go under her top, which made her head go back up. Towering the man, she looked down at Roan as his hand started teasing her breasts.

A breath of air escaped Clark’s lungs, as sparks of electricity crawled against her skin.

Then without letting her the chance to catch her breath, Roan tore down Clarke’s top, revealing her opulent breasts. He stared at them with envy, then back at her.

He grabbed one of her breast and caressed it, teasing her nipple with his thumb.

A low moan escaped Clarke’s lips, and she grabbed Roan’s hair to support herself.

Her back arched as his lips encircled her nipple, sucking it like a baby. Her mind went blank.

When her mind got a bit clearer, Clarke, astride on Roan’s lap, noticed something hard against the leather of her pants. She looked down and saw that the man was apparently really turned on…

She raised her eyes to fall once again in the depth of Roan’s blue eyes. He smiled mischievously and kissed her, his tongue playing with hers.

She couldn’t stop her body from moving, her hips seeking the hardness, and Roan groaned, quickly getting on edge. He kissed along her jaw and started caressing her lower back, right at the hem of her pants.

“Mn.. Wait…” Clarke whimpered. She could feel the man’s restlessness and didn’t want things to go any further. It wasn’t the plan…

But Roan didn’t listen, he moved his hand at the front of Clarke’s body. He brushed the smooth leather until he was at her crotch; he pressed one of his fingers where her clitoris was. Clarke moaned. She grabbed Roan by his shoulders, leaning her chest forward.

Roan couldn’t resist the temptation of her nipples that were now right in his face, so he took one between his lips, massaging the underboob. It made Clarke raise herself a bit so she could support herself on him.

She was now right on top of his dick, and Roan couldn’t wait any longer:

He tore the seam of the leather pants in one quick movement, exposing Clarke’s intimate parts. He locked the girl in his arms before she could try an escape, still sucking on her breast. He teased the entrance of her vagina with two fingers, prepping her for his big phallus. But she was already so wet that he didn’t to do much.

Readying himself right under Clarke, Roan made her move her body, pushing her down. After a second, he impaled her on his dick; her tightness resisted a little against his width, but one big thrust was enough to fill her to the hilt.

“Ahh! No!” Clarke cried out, not expecting such a sudden penetration.

She tried raising herself  away from him, but her whole body bent backwards when he thrust himself up, holding her down with his both his hands.

Clarke whimpered, she couldn’t help but feel good.
It hadn’t that long since her encounter with Lincoln; but the simple idea of this dangerous stranger ramming inside of her made everything “more”.

Unconsciously, she started moving her hips, reaching for that sweet spot.

Roan felt himself already come to his climax, and didn’t like the idea.

He stopped Clarke’s rocking motion with one hand and placed the other under her butt. .

Suddenly, Roan flipped her over, slamming her onto the ground. He pinned her down with his body to prevent her from escaping.

He raised himself up, on his knees, and gawked down at Clarke, laying defenseless under him.

She was beautiful, her blonde hair spread around her face. She was clearing flustered, pissed that he was taking control again. It turned him on even more.

Roan encircled his hands around Clarke’s waist and thrust himself inside her once more. She whimpered, clawing her nails in his forearm.

The young man bit his lower lip at her tightness as he moved back and forth. He leant over the girl, bringing their faces very close. His piercing blue eyes stared right into Clarke’s, and she had to avert her gaze to avoid moaning.

But his warm breath was now on her neck, which was not much better. She cried out, rolling her head back, as his lips brushed her skin.

Roan grabbed Wanheda’s chin and turned her face forcefully. He licked her upper lip, bringing another moan. The man captured her lips and mouth, playing with the tongue.

Roan slowed down his movement a bit, trying to match his thrusts with Clarke’s breathing rhythm. And he slowly brought the both of them near that sweet edge.

He groaned, squeezing his eyes, and raised himself up on his hands. He came to completion with one last thrust. He pushed his dick deep, reaching the wall of her womb.

Clarke cried out, arching her back as her whole body was overtaken by an orgasm; her eyes saw white. She could feel Roan’s seed rushing inside her.

Roan collapsed on Clarke, burying his face in her neck. They remained silent and motionless for a few minutes.

Then Roan stood up, his stance unsteady. “They should be gone now, we should go.”

He was apparently unphased by their hot intercourse.

Clarke sat up and looked up at the man, “Your wound is still bleeding, you need more rest…”

“We don’t have time for that.” Roan retorted. “I want to get to Polis before nightfall, so hurry up!”

Clarke sighed, she wouldn’t be able to delay him any longer. She had hoped Bellamy would have arrived yet, but he must have been stopped on the way.

Roan grabbed Clarke by the arm and tied her hands back. “Better safe than sorry!”

They exited the shelter after making sure no one was waiting for them. Roan lead Clarke towards Polis, now visible in the horizon.

They didn’t speak at all on their journey, which allowed Clarke to think about what happened. 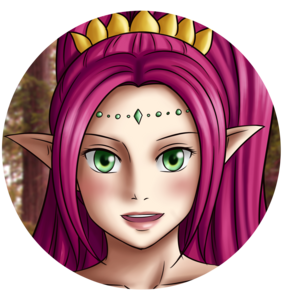 Clarke is captured by Roan and lead to Polis by the Ice nation warrior. But they stop to take shelter. 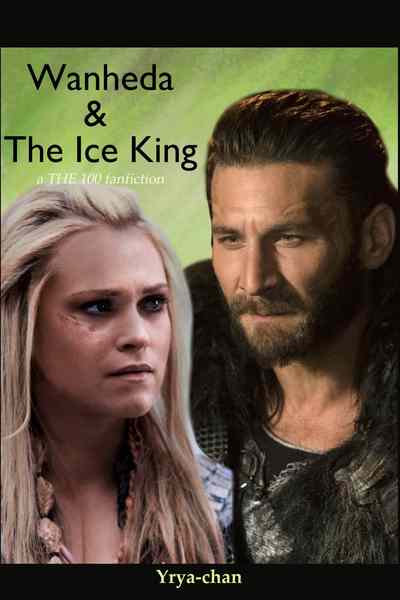 Wanheda and the Ice King

A short "The 100" smut fanfiction pairing Roan and Clarke.

I have always shipped them while watching the show, and am still a fan of their chemistry.
I had this idea for this fanfiction a while ago, but never had the time to actually write it. So here it is!

[It happens in sort of a AU timeline, so some things are different from what happens in the series! ] 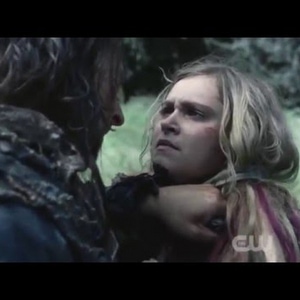