What's Wrong with Only Having a Shield? My Summoner Hates Me

I began cursing at myself as I hurriedly got myself ready for my second year of university.

After I had finished taking a shower and furiously brushing my teeth, I forced my clothes on and ran out of my room, nearly tripping over my jock roommate who had passed out in the living room due to another night of partying with his friends.

I quickly packed my bag with my notebooks, and ran out of my apartment door, only to remember had I forgotten my wallet and ID card. I cursed even more and ran back inside my apartment and, to my luck, quickly found both items on my desk in my room.

This time, unfortunately, I woke my roommate up. He was a heavy sleeper, but I guess anyone would wake up from the racket I was causing.

"What's the big rush, dude?" He yawned as he rolled over on the couch, almost collapsing onto the floor as half of his body was literally hanging off the couch.

His sense of balance must be insane. Makes sense considering he’s an athlete.

"I'm going to be late," I replied as I fought back the urge to plant a stack of books on the side of his body that was hanging in the air. For science of course.

"I should be the one asking you that!" I answered as I slammed the door behind me.

I ran past the elevator that broke mysteriously one day and down the usual tight flight of stairs.

“I slept early though. I don't understand this at all.” I whispered to myself as I made my way through the apartment lobby that was filled with the smell of vacuum and window cleaners.

I ran out of the apartment and avoided innocent civilians as I raced my way past them as fast as my long skinny legs could. I sprinted down the road towards my university and thanked my parents for making me take track and field when I was in my early teens. I might not have been able to survive the stress I was putting on my lungs and legs if it weren’t for those years of track and field.

Yes, I was THAT behind on the time I usually wake up.

While the wind styled my black hair back, I noticed that the sky was clear and blue, but I couldn't stay focused on the sky or else I'd be late for school… and also because I nearly ran into a pregnant lady while looking upwards.

“S-sorry! I wasn’t looking where I was going!” I frantically apologized to the pregnant lady and her husband as he was the one who caught me before I could crash into his wife. The wife was surprisingly calm about the whole incident, while the husband was understandably cross with me.

I’m sorry dude, but please, I don’t want to be late on the first day of my second year.

After a lengthy lecture on being more aware of my surroundings, I could finally see the gates of my university from a stone's throw away. All I had to do was cross an intersection. Easy peasy.

I checked my phone for the time.

7:50 AM… Alright, all I have to do is wait for this traffic to clear in front of me and I’ll make it in time!

I stood on the edge of the road, eagerly waiting for the train of cars to finally disappear when suddenly, I hear a familiar voice behind me.

I turned around and my heart started pounding even harder than it already was, and I nearly collapsed from the sight of her and my tired lungs.

It was the beauty of my class, Lisa.

She was wearing a beige dress shirt that was tucked into a short black skirt, emphasizing the size of her chest. She wore white shoes and black thigh highs which subconsciously brought my attention to the skin between the end of the skirt and the top of the thigh highs.

Wait, what am I thinking? Seriously though, what’s with that skirt and thigh-high combo? That’s way too much for an ex-loner like me.

Her long blonde hair bobbed and trailed glamorously behind her as she ran towards me. Her sky-blue eyes cleared up the clouds as she approached me. Her presence alone seemed to challenge the gods as if to say “Go on, try and make the weather terrible. I am a ray of sunshine!”

Lisa was the most popular girl in class… and for that reason, I decided I would stay as far away from her as possible. However, ever since the first day of university, she would constantly try to create and maintain a conversation with me even though I made it pretty clear that I am used to being alone.

At first, I was aware that she was just a nice and friendly girl, I knew I wasn't getting any special treatment or anything like that, but at the end of our first month of knowing each other, I gave in to her persistent conversation starters and ended up becoming someone she would call a friend.

Now, I don’t mean to brag, but I eventually became much closer to her than anyone else in our class.

Ever since then, I started enjoying my university life more and more.

She introduced me to her brothers and a couple of childhood friends who were, fortunately, gamers like me as well. We created a strong bond through multiple varieties of video games, even though Lisa was gods awful at MMO games.

I would soon come to the realization that I had gotten to know and get along with the majority of my class because of her, she was like a chain that kept us all close together.

Without her, I would have had another quiet year by myself… which I would have been fine with by the way, but Lisa demanded that I don’t have my first year all alone to myself.

After the first year of my friendship with Lisa, I came to accept to myself that I was in love with her, but I had no idea how to confess to her. For someone who was pretty much always alone for the entirety of their high school life, confessing was nowhere near on the list of things I could do.

As if the gods were cheering me on, Lisa had recently invited me to her birthday party at her house, to which I gladly attended.

This was my chance! I could confess to her on her birthday about how I felt while giving her a gift! I’m a romantic genius!

No, I did not get accepted... but I also didn’t get rejected…

I ended up as a stuttering, nervous wreck, so I just gave her a silver necklace with a cute cat-shaped pendant that I bought without saying anything to her.

How romantic of me right? Don’t mention it…

"I can't believe I'm going to be late!" Lisa exclaims as she brings her hands to her knees.

With her body lowered at an angle towards me, I looked at her closely and realized she was wearing the silver necklace I had given to her for her birthday. My heart decided to start running again in place as I silently celebrated to myself.

I decided not to comment on it for now and act as if I noticed it during class.

That would be kind of cool, wouldn’t it? “Oh hey, I noticed you’re wearing the necklace I gave you. It suits you.”

Yeah right, as if I could add that last part without stuttering.

I looked ahead and realized that the road was clear, I completely dropped planning what I would say to Lisa when I pretended to notice the necklace for the first time and sprinted ahead of her, hoping that I would at least get away without being scolded by my teacher for being late.

I finally reached the other side of the road and thanked the heavens.

I said to myself, which was hypocritical of me since I would often get distracted by wholesome thoughts of her while I would try to study.

I heard a loud blaring noise and a hair-raising scream.

I instantly turned around… and just behind me was Lisa who was frozen still in place as a truck, that for some reason didn't stop for our crossing, was about 6 meters away from her at terminal speed.

Lisa is going to die…

My body heats up and reacts on its own as I jump towards Lisa in an attempt to push her out of the way. I grabbed onto her shoulders and pushed her as hard as I could.

Time began to slow down, and I was somehow able to see some things around us for myself. The people on the side of the street yelling and screaming in fear, my classmates and other university students in shock behind me, and the massive grey truck heading towards me.

The truck slams into me and I see mixed colors of blue and grey as the sky and the road mix together in my vision. The spinning continues for a while until I finally feel my body come to a stop. Unfortunately for me, I was still conscious when I came to a stop. I felt my energy draining from every portion of my body, my head was spinning, my lungs and stomach were burning, and my ears were ringing.

I couldn’t even remember the feeling of the truck slamming into me… I didn't even get to see the clear blue sky for a final time since my face was planted to the ground. My body felt like it was melting, I couldn’t feel if my bag was still on me… Hell, I couldn’t feel anything at all. The only thing I saw was concrete.

I lived a fairly quiet life, even as a university student. I only attended parties or hangouts that I knew Lisa was going to be in, and I mostly stayed in my apartment reading books or playing games… Okay, I was mostly playing games, but I at least knew how to study.

Sure, maybe my classmates might grieve about me, but I knew for sure that they would grieve more if it was Lisa that had gotten killed.

I closed my eyes for a final time and decided to rest for good.

I was just happy that I was able to at least save Lisa, although I do wish I had pushed both of us harder so that I also would have survived.

What did I feel? Pride? Regret? At the time, I had no idea what I was feeling. All I know was that it was time to sleep forever. 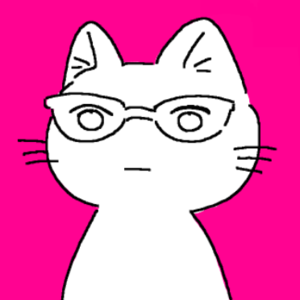 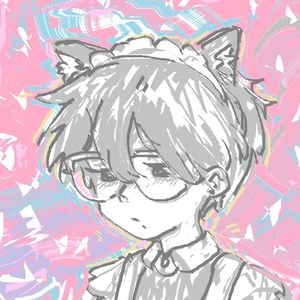 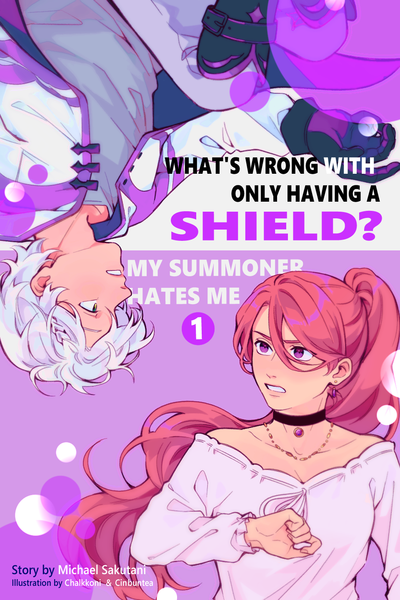 What's Wrong with Only Having a Shield? My Summoner Hates Me

Follow the adventure of an ex-university student, Rin, as he gets reincarnated as a "Spirit" with a shield being his only weapon in another world. Although he is overjoyed at the chance to live out a childhood fantasy, there's one major problem... His "Summoner", Isabel, sees no reason to keep a "Spirit" who's only good for defense in her party! Rin has to find a way to survive in battles and dungeons as an unwanted and heavily under-leveled character!
Subscribe 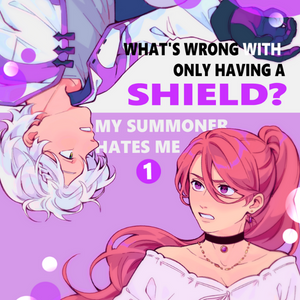