It wasn't the first time they had said goodbye to a friend.

The group had been bigger before but as time went on and high school came around the group lowered in members. Jessie, Gerry (Gerardo), Penny, and Amare; the "chaotic queer quartet" were now the remains of the church choir. Amare supposed now they would be known as a trio.

The dry wind passed by as the sun burned the grey pavement into a glistening ashy grey. The quartet walked around laughing and jesting. They sat down underneath a grand old tree. Cooling off from the sun's eye.

"We're gonna miss you, Risitas." Jessie patted Amare's back. "Who are we gonna call at midnight to take us on a ride now" They snickered and began to point fingers at the rest of the crew. Amare, known as giggles, pulled away and tried to hide his pained smile.

He still laughed along. The prick behind his eyes and the ball in his throat getting heavier. It reminded him of the time he ate sand as a kid. Grainy, dry, and heavy. All he wanted to do was cough it out. He knew the time had come, he had to tell them. He needed to do it now. The teenage boy glanced at his friend's saddened smiles and looked back at the path they had spent hours reminiscing and saying goodbye. He could always let them believe the lie he had told them...

"Just remember we got your back and if you ever need us to whoop your mom's ass we gladly will." Penny slapped his back in a loving manner.

Her simple words managing to make Amare tear up. Yet he continued to smile as the tears dropped. Jessie and Gerry looked at each other as Penny began to panic. He wiped his salty tears, hiccuping and soft whimpers fell out of his mouth as he tried to explain.

How desperately he wished he were moving for another reason.

Amare's mother was someone he could never read. It was like staring at a mirror and never knowing what the reflection was thinking. When you move it moves with you yet when you speak it doesn't respond back. Did the reflection share the same ideas or did it oppose you? Was their left your right or left? The more he thought about it lead to him give up on her opinion. That was until she figured it out.

He was not sure how she had found out about his sexuality, then again he was not discreet about it either. She wasn't homophobic but she wasn't accepting either. Whatever that meant to her he just never understood.

As he finished there were light gasps from the crew. They muttered and tried to pinpoint a time she could have caught him. Amare felt warm thin arms around him as he shook his head. By the time he was done weeping someone else started sniffing.

"Where is she taking you then?" Gerry fiddled with his friendship bracelet.

Jessie licked their lips. "Do you really think she'll take you..." They lowered their voice into an ominous whisper, "to a conversion therapy or camp?" The group shivered.

He rubbed his arms and shook his head. "I'm staying with my dad up in the middle of nowhere. I don't know if he knows..."

Penny gasped. "Wait didn't you say he lived in Forks?! Or somewhere around there." Gerry smacked her arm.

Amare shrugged. "Dunno. It's been almost four years since we've talked." His phone began to vibrate with the name of the person he dreaded the most. The group stared at him. "I have to go..."

The release of tears began and he felt terrible. He could have left it at a bitter-sweet memory but now it seemed more sour than sweet. A honking was heard and he turned around. Their faces were comical but the rage was evident in their eyes. He waved at his friends and slowly walked away. Each step felt heavier. The dirt and grass clung to him. Almost as if the earth didn't want him to go either. He entered the car and waved goodbye to his friends.

It was no surprise to Amare when his mother told him he was moving in with his father. When they got home she continued going up and down the stairs, each time bringing all of Amare's belongings and his hopes in her arms. He blinked. Silent and waiting for her fuse to blow. Yet she uttered no such words...

"You're taking the cat with you."

He huffed but made no comment on the way to the airport. There was no way he could win an argument against her. His eyes burned through the window as the cars passed by. The sun was coming down closing the end of his shitty day. Amare chewed on his lips. When he had enough of the outside world he turned. Just to peek at his mom.

The dark circles were barely noticeable against her light tan skin. Her usual smile was replaced with a harsh line. Focused, she held onto the wheel for dear life. It almost made him laugh. Her brows were furrowed causing her wrinkle lines to show. She worked as a real estate agent hence the few frizzy grey hairs fell onto her harsh face. Always bubbly around others yet when the doors to the house closed a cold and aloof face would arise. Or at least that was her character until yesterday. Her tired brown eyes glanced at Amare. Changing the radio station he turned towards the window, hoping to be discreet.

Amare always wondered how she would react if he had told her.

"Be sure to report back to me once you get there." Her breathy voice held haste.

He scoffed and bit back his tongue. The pain in his chest was suffocating. And hearing her speak made it worse. Oh, how Amare wanted to yell and ask her why. To shake her. Slap some sense into her. Was it so bad to love another guy? He rolled his eyes at his choice of words. Love? Did he really know what that feeling was?

Cars passed by in a blur. Amare tapped the window to the beat of the song and lost himself in thought. How his dad would receive him? Did he know? How would he have to address him? Mr. Santos, dad, el padre? It felt like an eternity since they had last seen or heard of each other. After the divorce, Mr. Santos became a psychologist and remained in a little town in Washington. Compared to California it was never sunny and the clouds seemed to enjoy remaining there. He used to go there every holiday.

Or at least that was until his mom remarried to a lawyer.

Parking near the entrance of the airport he ran out and waited for the trunk to open. He stared at the floor and avoided his mother's words. His ears were ringing. Amare desperately took his bags out and then flinched at the accidental touch of his mom's hand.

She blankly stared at him.

He looked away avoiding her stare. His eyes were ready to let the tears out. But they couldn't. Men don't cry. That is what she always told him. He found it so unfair... so suffocating...

"Yo puedo..." I can he said moving his baggage. He rolled his bag into the sidewalk placing them on a rolling cart. Amare knew how much she hated hearing him speak her native tongue. Perhaps that's why he kept using it to talk to her.

He wasn't sure whether he was obligated to say goodbye so he walked away. Amare slipped on his headphones. Leaving his mother who kept calling his name in annoyance.

He shuffled past various people. Shoving a few as he made it up the escalator. As a kid, he always loved plane rides. He still did but now any slight noise made him want to choke the nearest individual. Especially when glanced at the last text he received read:

Amare nearly screamed. His face flushed. It wasn't until recalled the cat she had gifted him few years prior. Who names their cat Satan he was frequently asked. The stray cat had been found in the corner of his cousins' house. It was a lovely vintage house but always so cold with the lack of love. Amare's uncle had brought it in as a gift to his children. But when they realized it had fleas and hated the dark blue curtains, Amare received a box that same day. The name Satan just seemed to stick.

Without thinking twice he blocked her number. Of course, she would worry about the cat. It wasn't like she was sending away her child.

The sight of clouds and the blue sky would make the plane ride easier. Or so he thought. But once the first sob came out the tears just would not stop. He scolded himself, Just wait until the night comes. Wiping his tears he opened a magazine and remained stoic. Soon after takeoff, he lulled himself into darkness.

He jerked himself awake at the sudden bump of the airplane landing. The sun peeked through the blanket of clouds. Amare smiled supposing this couldn't be too bad. That was until the lady beside him made him eat a face-full of her purse.

Amare sluggishly made his way through the gates. He shifted his bags and swallowed the Starbucks drink in his hand. There weren't many people at the airport but the loud noises and the passersby made his head spin. With eyes closed, he walked. Chest rising and descending. Ears beginning to ring. He looked around nearly tripping over himself until an arm helped him.

He mumbled a beehive of apologies and over-explained how he was looking for his father until the individual's angelic voice stopped him.

Son? Amare looked up and recognized his father's face. On the corner of the eyes, crow's feet had grown. Hooded bark brown eyes were dilated. Mr. Santos, his father, stared at him with a large smile that revealed his light grey teeth and smile lines.

Amare was not able to say anything. The air had left his lungs as he was crushed by his father's arms. Cinnamon and spice-filled his brain as he regained a lost memory. A hug from his father. Always warm and secure, it would make you feel small. He was probably around his father's height now but with that hug, he almost wished his parents never left each other.

When they pulled away from each other Amare felt a kiss on the cheek. His father's eyes were now filled with tears but his smile still remained. "I got you something." Mr. Santos gave Amare a box with a purple bow on top. "Andale. Go ahead."

Amare held his breath as he opened it.

Inside was a cat with a rainbow heart, the letter A embroidered in the middle.

He looked up with swollen eyes. The little sparkle of hope gripped his heart as his dad continued to smile. "Amare. I love you as you are ." Amare started to sob. "You are my son and nothing will change that." They embraced each other with a tight grip. Amare throat had never felt so sore yet he continued to mutter; 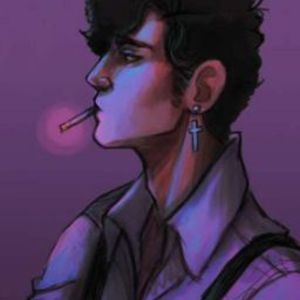 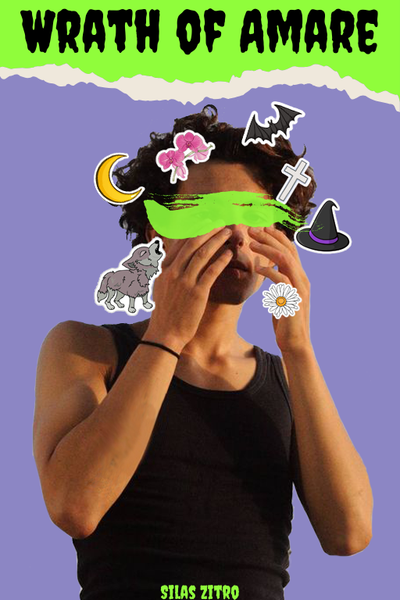 Amare gets kicked out of his mother's home for being gay. Having to move in with his father to the middle of nowhere he beings the start of junior year with the goal of attempting to exist. High school couldn't get any harder when he realizes that Mr. Silent-Bad boy is a vampire, his friends aren't what they seem, and his family isn't the picture-perfect portrait he has been raised to believe they are.
Subscribe 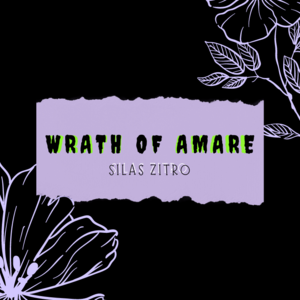