Joined Sep 2018 The Bottom of My Third Coffee

Hello! Indigo here! I'm the creator of The Black Belt Society comic, something I've been wanting to create for a long time now. I've been drawing pretty much my entire life and writing stories for about 10 years.
I hope to earn an audience who can enjoy my creations with me. I want to make people smile when they think my of work! So I hope you stick around!
Thanks for reading!

Hi Everyone!
Indigo here, back with another
monthly update.

This is another good news,
bad news situations.
Next week will be the final episode
of this batch of pages, but there's
still a little of chapter 5 left. I've
already started working on the
next batch of pages but I'm only
in the sketching phase. In other news,
I've made an instagram account
completely devoted to The Black Belt
Society! you can find it as
@the_bbs_comic. There, I'll be
posting updates on the comic,
behind-the-scenes stuff, and extra
art of the characters. I just opened
the account about a week ago, so
there's not much on it. But if you
want to follow, I have a link in my
profile or you can just search up
@the_bbs_comic on Insta.
That's all I have for now!

Thanks for reading and
I'll talk to you guys later!

Hi Everyone!
Indigo here, back with another
monthly update.

I'm back! Though it's not like
I really went anywhere. Good news,
I'm making good progress on pages.
I've gotten all the sketching done for
the next batch and have already
starting on the lineart! In terms of a
timeline, probably November for when
the next batch of pages will go up. I
know that's a little while away still
but it'll be worth it, I swear! And there
will be bonus content in between: the
Inksgiving AU Band drawing is also
almost done and should go up some time
in October! I was even thinking of making
it a print and selling it in the future, but
we'll see. I also plan on making a Halloween
extra this year as well and I'll be posting
progress shots of that on my Ko-fi
(which is linked below). Haven't decided
what I'm going to be doing though, so
don't head over there just yet! I think
that's all that I have for now.
Thanks for reading and
I'll talk to you guys later!

Lastly, here's a preview page
for the next batch! 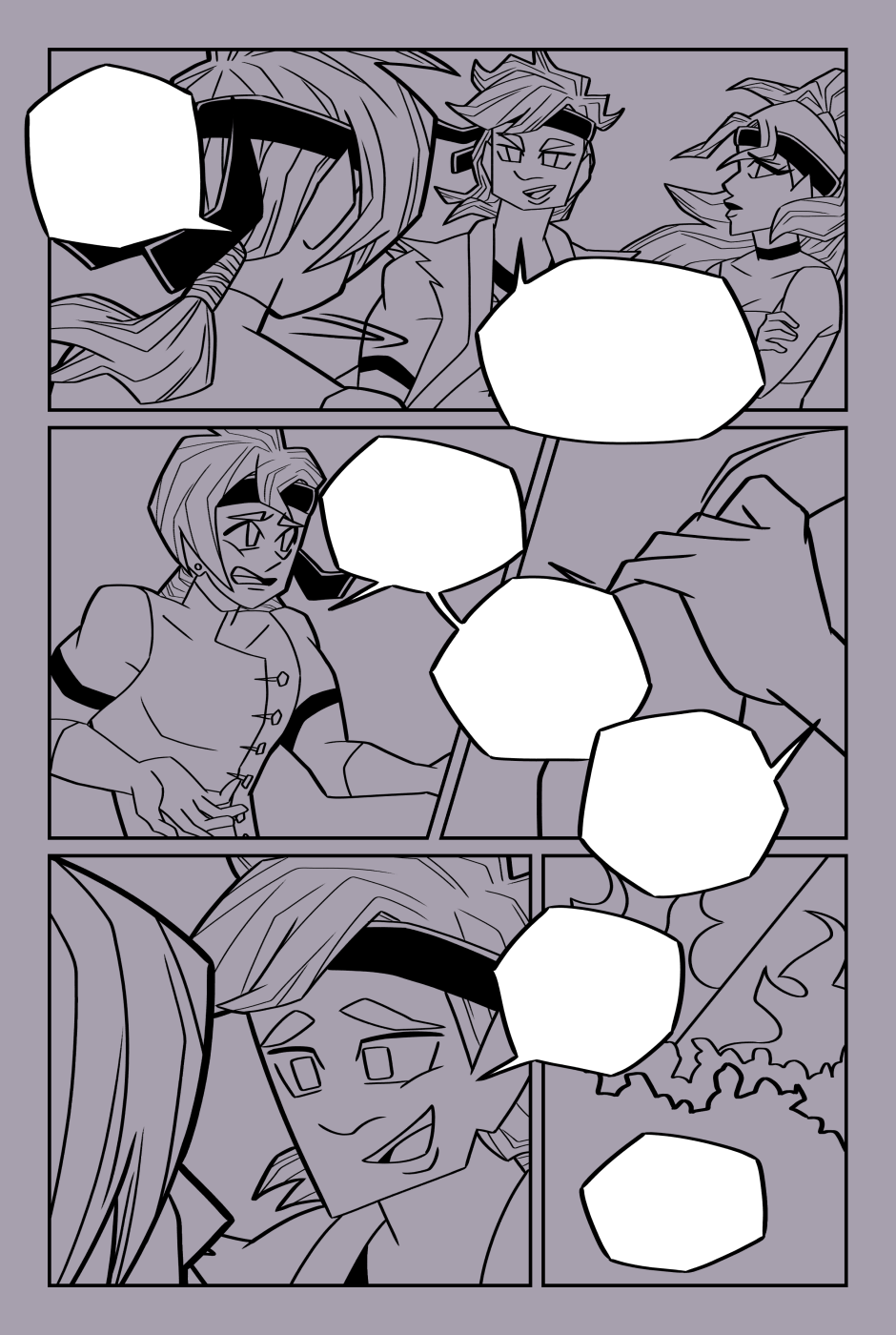 Hi Everyone!
Indigo here, back with another
monthly update.
It's been a long time since I
posted an update, but honestly,
it's cuz I forgot. haha... Anyway,
I have been working on the comic
since the end of the Webtoon CTA
contest (if you want to support I'll
leave the link the description below!)
At first I was really into it, but have
slowed down as the panels
got more difficult. But I'm still
pressing on! I'm hoping to be down
with most of the sketching by the
end of the month, but we'll see!
If you want to see a preview of
one of the up coming page for the
chapter, it's up for free on
my Ko-fi (also linked below)
Thanks for reading and
I'll talk to you guys later!
Reply  to conversation

Hi Everyone!
Indigo here, back with another
monthly update.
I know it's been a while, but
I've just been really busy. Anyways,
nothing really has changed since
the last update. BBS is still on the
back burner for now while I work on
my entry for Webtoon's call to
action contest. But, I can't wait to
start working on BBS again,
hopefully by July. I have worked
on some BBS content: the rewards
from inksgiving of last year and I'm
willing to give a little peek on the
progress. It would only be fair.
I really wish I was further along,
but like I said I've been busy
with life and such. Well that's
all I have for June, see you
in the next update!
Thanks for reading and
I'll talk to you guys later!
Reply  to conversation

I usually don't make wall posts like this, but it's not time for a monthly update. Anyway, if you want to see the completed sketch of AU drawing of the 2nd Inksgiving reward, the link is here: https://ko-fi.com/post/Im-back-U7U2CL529

It's free for the public. I wish I was farther along with the piece, but it's a pretty complicated sketch...😅
Reply  to conversation

Hi Everyone!
Indigo here, back with another
monthly update.
It's mid-April and boy do I have news.
Good or bad, depends on what you've
been hoping for. So in late march,
Webtoon announced their "Call to
Action" contest and I haved decided
to participate! But, the entry for the
contest I'm going with is a whole
separate story from BBS, and because
of that, I've been holding off working
on The Black Belt Society. I know that's
probably not welcome news, but I'm really
exited about this contest. Regardless of if
I win or not, I've always wanted to make
a one-shot with story I'm using. That means
that the release of new page won't be in
June but will likely be closer to the end
of the summer. I'll still work on pages,
intermittently, but they won't be my focus.
I haven't forgotten about the Inksgiving
rewards, and they will either come
out in the upcoming months before the
new pages or at the end of chapter 5.
That's all the news I have.
Thanks for reading and
I'll talk to you guys later!
Reply  to conversation

Hi Everyone!
Indigo here, back with another
monthly update.
I know I didn't post one in February,
but I didn't have much to say that month.
I still don't have much to say other than
unfortunately, yesterday's update
was the last batch of completed
pages for now. I've already
started sketching the next batch
and those will probably be out in
or around June. I'm really busy in
my personal life; I'm preparing to
go back to school. Also, I haven't
forgotten about the Inksgiving
rewards. I said last time that I'll post
them after this batch of pages,
but they're a little spoiler-y. So,
if you want to still see them,
leave a comment and I'll post
them during the down time
Just a reminder of what they are:
chibis of the main characters
and an AU image of the main characters.
(Also, please follow my Ko-fi; I'm going
to be posting more behind the scenes and
early access content over there)

Thanks for reading and
I'll talk to you guys later!
Reply  to conversation

Sorry that today's episode is coming out a little late. I thought I had scheduled it on time but I accidently only saved it as a draft 😅 It'll be up around 6:00 om PST (8:00 pm CST).
Reply  to conversation

Indigo here, back with another
monthly update.
Happy New Years! It's the very end
of January and I finally have an update.
I don't have much to say. I'm really
working overtime to get pages done.
I pretty much have all of this batch
lined and most of them colored. I'll
be starting on the shading soon.
I'm hoping to start posting on the
11th of February. I haven't forgotten
about the Inksgiving rewards! I'll post
them after this next batch of pages.
Just tell what AU you want to see the
characters in and if you have any
questions for me, the author,
for a QnA!
Thanks for reading and
I'll talk to you guys later!

Comment from ar-ninetysix: "Ahhhh it seems I reached the last update you got available. This was a breeze to read through! Very Zelda in design lol "get the 3 things and bring 'em here". I'm liking the vibes, and I'm down to read more :) thanks for entering your comic to my music contest thing!"
Reply  to conversation

Hi Everyone!
Indigo here, back with another
monthly update.
Time for the December Update!
In regards to Ch 5, that's slowly
coming together. I'll probably push
back the release of new pages
to February. For one, they're not
done yet. And for two, I've been
having elbow and wrist pain that's
keeping me from working on things
more often. And I still want to
draw other things besides my comic.
There's really not much else to
talk about. Reminder for inksgiving
rewards, there's still time to decide
what the AU image will be of and
to ask questions for the author QnA.
So, Merry Christmas and Happy
New Year and I'll talk to
you guys in 2022!
Thanks for reading and
I'll talk to you guys later!
Reply  to conversation