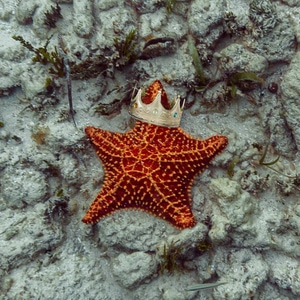 I'm Enrique Rosado aka The StarfishKing. I play games on my Youtube channel and write comics and novels here.

Wow, two years. I’ve been working on the comic longer than that, but today marks the anniversary of its initial release on Webtoon Canvas. It's both amazing and strange. I’ve had the joy to work with the amazing artist Cammry Lapka (follow her socials here), who has put her all into this series. We followed the weird, fun adventure following the manic druid Shay, the tech genius Ven, and Pink the cat who… it's just a cat.

A lot has happened since then. Shay and Ven went from a public trial to an evil Gas Station to a random town in the woods being attacked by monsters. We are near the end of Chapter 6, we just hit THAT MOMENT; a physical copy was released in that time, and much more planned in the background.

Most of all, I want to say thank you to you, the readers, for real. My goal has always been to create a story that helps fill people’s lives with joy, excitement, sadness, and feelings that remind us of what we have and leave an impact that forever sticks with us. I’ve always been inspired by a bunch of comics and cartoons that left an impact on me, and I want to replicate the feelings they left in me and give them to the people that come after. I don’t know if we reached it but maybe one day. So, thank you all, and here’s to more adventures down the Cat Trail.
Reply  to conversation

NEXT WEEK'S CAT TRAILS WILL BE HUGE! By that I mean it will be the longest update we have made. This is because this update is a big moment in the story and it will be better as one update instead of 2 to 3. So get ready for Cat Trails next week!!!! (I'm so hype)
Reply  to conversation

I've been swamped with a bunch of projects. From comic projects, I pray will see the light of day one day 😭

To novel projects I know will release this year ( 3 to be exact) All for you to read online. I will post those here starting with a credited version of Shore with the goal of releasing the full series here. Don't worry those are the other two books.

Also, did you catch the new update to Cat Trails? The next updates after are something to look out for. Especially one in particular, I am excited for you all to see 👀

I will do my best to keep the updates more frequent.

Hey everyone! Today is a big day for me as I released a series i have been working on for the longest, Cat Trails. Its a Fanatsy/Dramady about the manic druid Shay tricking the tech savy Ven to take her down... well the Cat Trail. The talented artist Cammry Lapka (whose work you can see on Pugmeria here on Tapas) is doing the art and it is fantastic. This will update every Saturday and Tuesday at 5pm. Don't forget to subscribe to to keep up! Thank you for going down the Cat Trail.

Today's release of Burnt Out is the last part for Treat Yourself. Starting next week, we will be starting a new story. From zombies and ice cream to Mystic fighters and wars. You know, smooth transition.
Burnt Out: Shattered Fist Part 1 comes out next week.
Reply  to conversation

Big Announcements for October! Two new series and a new release schedule for one.

A new novel series is dropping 10/7/19 is SHORE. I will be releasing segments of the book every Monday.
"Lahar’s life as an average college student is gone when she is transported to a mystical land by the sea. With the help of her new friends, a beach bum wizard named Arena, a dog who can burst into flames, and three sand spirits, she must find a way home while monsters from below the sand hunt them down."

If you don't want to wait every week, you can find the physical of the complete first book on Amazon now!

And last but definitely, definitely not least, on 10/16/19 a weekly comic series I co-created with artist Oscar Fernandez. It is Burnt Out Comics, and it is an anthology series.
"We all have bad days, sometimes we forget our homework in our room, lock our keys in the apartment, find pieces of a zombie in every pint of ice cream, or even hunt down a god on a murder spree. Burnt Out Comics is a series about adventure, love, and all that makes us human told in strange and absurd ways. Your exhausted Co-creators Enrique and Oscar will bring stories to you every week on Wednesday."

New parts will be released every Wednesday!

If you like the stories, consider liking and adding them to your library. I am on Instagram and Twitter. Click the links to the side or fallow @WriterRosado on both. I hope you guys enjoy these stories, and I will continue to work hard to bring you all these and produce the best content I can.
Reply  to conversation

Hey everyone, my first post weird. I just wanted to break the silence on this page. Hopefully, I'll be able to keep up on posting updates here. I'll try, but most of the photos I would post are too big in file size. If you want to keep up, check me out on Instagram at @thisonefellow or click the button on my page.
Like always if you have a suggestion or a challenge for me to write for my collection on Internet 24, comment below!
Reply  to conversation