I'm just this guy, you know? As of August 2010 I live in Massachusetts.

xkcd updates without fail every Monday, Wednesday and Friday.

Contact:
press@xkcd.com -- Press questions, etc (may take a long time to get to me).
whatif@xkcd.com -- What If? Questions.
contact@xkcd.com -- Anything else (Also may be slow).

The coordinate plane is closed tomorrow. There is currently a big hole. We apologize. 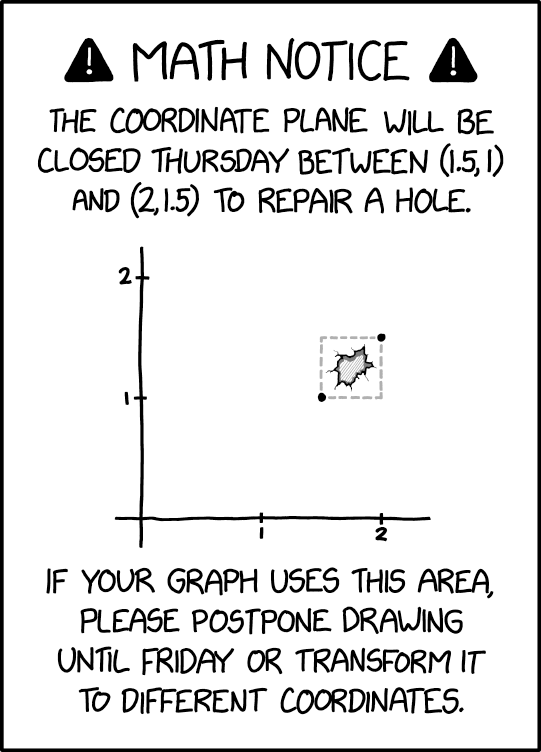 In this comic Miss Lenhart is teaching a school physics class. One of her students asks what the color of electrons is.

This is a relevant question for a kid to ask since on many scientific diagrams of atoms, the subatomic particles have been assigned colors to identify them for the reader. Neutrons are generally red, green, or gray; protons red or green and electrons might be blue or yellow. But there is no accepted rule for coloring such diagrams, so the kid may be confused. Additionally, some scientific diagrams use color coding rather than actually representative colors, and the kid may be wondering what color quarks actually are.

In completely off character style, Miss Lenhart actually gives a correct explanation and states that, unlike the diagrams, which are colored for convenience, the particles are not colored. She even gives the correct explanation for this fact: They're too small to interact with visible light, so "color" isn't even defined for them. For a more typical Miss Lenhart see for instance 1519: Venus.

Of course she then continues by saying that electrons are definitely yellow. It isn't clear if she means they should be yellow on diagrams, because she feels that is to correct way to depict them in drawings of atoms, or if she is just teasing her young pupils. But her off-panel pupils take her word for it. One of the kids says "I knew it", to the "fact" that electrons are yellow, and likewise the other pupils completely ignore what Miss Lenhart just told them. The debate then starts as one pupil claims and protons are red?, and another chimes in, with a No, they're gray! This only makes sense in a debate of how to draw atoms, not regarding their actual color, as Miss Lenhart just explained.

The opinions over the colors are probably based on what kind of diagrams people were initially exposed to, leading to a predisposition to think that those colors are 'correct’

A Open-Letter message to everyone.

I just want to thank you guys for the support lately on xkcd. I know the art isn’t that good, just simple stick figures. But i’m holding a contest. If someone can draw a good banner with xkcd logo and some stick figures on it, I would appreciate it. The person who wins will be featured with his/hers comic promoted on both of my series. My banner is a choppy one, just a book promotion. But if I could get a cool stick-figure banner, then I would LOVE it.

Thanks!
Reply  to conversation

(testing if gifs work)/[(They probably will)]

it fucking worked
Reply  to conversation

sorry for the spam/late explanation

Cueball attempts to emphasize to Ponytail what Texas's size is (as the largest state in the contiguous US, although the second largest state in the whole of the US), by making a size comparison. He states that with Texas expanded to the size of the Solar System, the ants in Texas will be as large as Rhode Island (the smallest US state). However, Cueball on purpose (according to the caption) just proves how small Texas actually is compared to the Solar System (which is a lot larger).[citation needed]

A common analogy for expressing a statistic (such as area/volume/population size/population density) of unfamiliar things is to compare that thing to some other reference that people are likely to already have an understanding of, if only through past comparisons. For instance, it is said that a human-sized flea could jump the equivalent height of the Eiffel Tower (if jumping ability scaled with animal size; which it does not, due to how some of the different numbers involved will scale to the square or cube of the linear factor, so such aspects as power-to-weight ratios and sheer biomechanical strengths cannot be maintained). In this case, Randall is comparing objects that are extremely different in scale (the state of Texas and a small insect), but then blowing Texas up to yet another size many orders of magnitude larger, and then comparing it with something else his addressee has no comprehension of, with the result that the comparison is of no value in understanding how big Texas is (which could be supposed to be Cueball's intended impartation), or what ants have to do with anything in the first place. The only message you get in the end is that "Texas is much bigger than an ant," which most people already know.[citation needed] 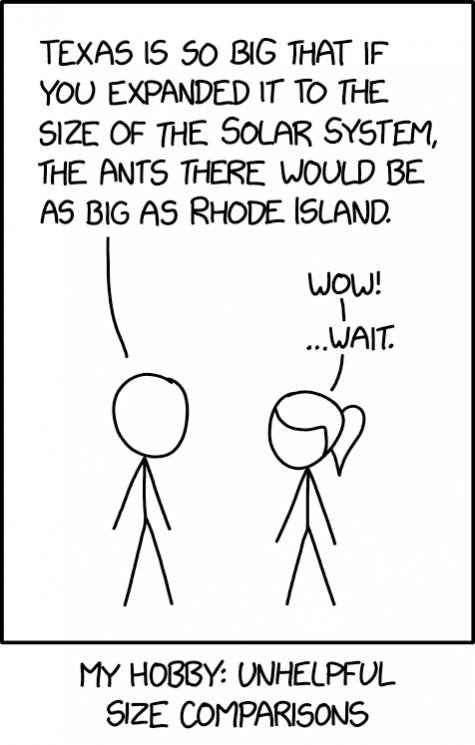 xkcd what if will update twice every day…..
Reply  to conversation

I just released xkcd; what if?

its where i answer absurd questions
Reply  to conversation