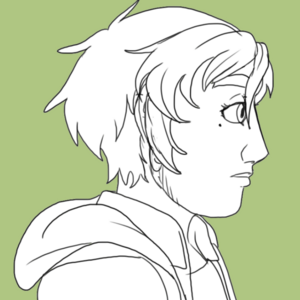 Chloe M. An animation student who procrastinates way too much.

Hey all.
So... I'm going to be attempting a BIG restyle of the comic. Don't worry! It's mostly the same as it stands at the time of this post. But my old computer ate the dust during the early days of summer break and uhhhhh yeah I kind of lost over 4000 files including pages that were scheduled to post... yikes! ;v;

I'm gonna try and finish up some animations and then get back to working on the comic, fresh with a new opening and better screen direction! Some new story elements have developed and expanded in the absence and so hopefully the final product will be a LOT better.

Sorry for the lack of content and I hope I can get back to making the comic faster and better as soon as possible!!
___
ChloeCorvid
Reply  to conversation

Sorry for the hiatus!! Motivation for chapter 1 is honestly really difficult because it is so unlike the rest of the comic, so my focus has been on concept art / development rather than updates.
I'm gonna try to set a solid schedule to work with since I already have my class schedule for the fall. Here's hoping I can stick to it!
Reply  to conversation

Announced previously on my tumblr, but OYS is going to update every other Saturday! (noon or midnight) College is time-consuming but great, so hopefully updates can be regular on this schedule.
Reply  to conversation

Hey y'all!
Okay, I'm about to go to college and that involves moving to the dorms and all the joys that go with art school. So... OYS might be a bit later than usual in terms of updates... That being said, once I'm more familiar with my new daily schedule(s) I can hopefully set up a proper update schedule!

So! Wish me luck at KCAI and here's to OYS soon having an actual update schedule!
Reply  to conversation

The new format and updates are fast approaching!! When they're here, the old pages will be removed and replaced.
Reply  to conversation

Pages and format are going to be redrawn and changed DRASTICALLY soon, so expect something a little easier to follow and somewhat more frequent updates!
Reply  to conversation

Keeping myself on schedule with the comic and school is somewhat difficult, but when I get the chance to, I'll try to update regularly ("regular" updates TBA). Excited to see how this site works and to share this crazy story that's been eating away at my brain for almost a decade!
Reply  to conversation