The kiss was like nothing he’d ever experienced before. It was not soft and gentle, nor was it unsure or quizzical. His body didn’t bulk and reject the touch, spikes of pain driving his nerves to scream. He did not feel any sort of desperate need to pull away, though he was certainly being attacked. Sasha’s lips were greedy, his mouth rough and heavy with want that burned Tea wherever the man touched, and oh was he touching him.

Sasha had propelled forward so swiftly, there was no time for Tea to react. The moment their mouths connected, the skinwalker was driven up against the wall. Shock from the kiss and sudden contact with the hard surface practically knocked the wind out of Tea. The Specialist’s body pressed flush against his, hands finding Tea’s waist and gripping it firmly as he ground his pelvis against the smaller. Tea’s eyes were open for the initial launch but dizziness and heat very quickly had them shut. His own palms rested flat against Sasha’s biceps, light and insignificant compared to the vice-like hold the taller had on him. The room was spinning faster than Sasha could redefine the term ‘inescapable’.

As quickly as Sasha’s lips had pushed harshly against Tea’s, they parted. Tea gasped for air once his mouth was freed, Sasha’s face still a hairsbreadth from his. Catching his breath, the skinwalker thought he was having tremors for a moment. Trying to quell the shaking, he very quickly realized that he wasn’t the one trembling so violently.

Tea’s eyes shot open, greeted by the Specialist’s contorted expression. His brow was pinched, jaw locked, and his whole body was quivering. The intensity of the hold he had on Tea’s waist fluctuated; first growing tighter, then looser, then tighter again in rapid succession. Lips still bruised from the attack, Tea’s heart hammered painfully as panic bled through the shock. “Sasha, are you okay? What’s wrong?” He gripped the man’s arms harder, fear coursing through him as he imagined what could have gone wrong so quickly.

Then a guttural sound escaped through Sasha’s gritted teeth, a deep growl Tea felt all the way down at the base of his spine. The skinwalker stilled, taken aback by the sound reverberating from Sasha’s chest into him. His breathing hastened as Sasha leaned in and pecked his lips softly before trailing featherlight kisses across his cheek to his ear. Sasha’s hands loosened on Tea’s waist, sliding to the gap forming between Tea’s back and the wall to hug him closer.

Tea’s arms in turn encircled the man’s shoulders instinctively though the shift invited the other to squeeze Tea so hard he thought for a moment he’d lost the ability to breathe. The rock hard hold trapped Tea against an already hard body, hot breath blowing across his ear as the Master finally spoke. “I am sorry for this.” Despite all odds, the man managed to hug Tea tighter. The skinwalker realized his heart was not the only one racing as he felt Sasha’s pounding painfully in his chest. Sasha’s voice dropped a full octave as he said, “I have wanted you long enough that I have imagined all the ways I could take you.” Sparks ignited in Tea’s stomach, all of his hairs standing on end in warning. He balled his fists against Sasha’s back, but remained silent just long enough for the Specialist to explain, “I will respect your boundaries . . . just know, it is hard to deny the temptation and desire I feel for you.”

Teeth snagged Tea’s earlobe and a flood of heat shot from that point of connection to his core. Golden eyes rolled to the back of his head, his back arching towards the man whose arms now caged him. Sasha groaned, tongue swabbing in a long stroke over the shell of his ear. Tea, overwhelmed with sensation, flattened his hands on the man’s back and began patting him frantically. “Let me,” his teeth ground together, “breathe.”

“Okay,” Sasha released him in an instant, hands plastering to the wall at the skinwalker’s back. He leaned all his weight into the wall, still trembling as his shallow breaths blew across Tea’s face. Tea leaned back against the wall also, sucking in as much air as his lungs could hold. He couldn’t make his heart slow down, and he couldn’t extinguish the fire that was now plaguing every inch of his skin. It pooled inside of him, threatening to keep him from regaining his composure. If Tea hadn’t been shaking before, he was now.

Covering his face with both hands, Tea struggled to form a coherent thought. Old logic screamed for him to run, hide, do something other than stand here with the human equivalent of a loaded gun. He’d never felt so red hot in his life, and he wasn’t sure he could cool off if he wanted to. One look at the man before him, who had resumed that contorted expression of forced control, and Tea knew Sasha probably had it far worse than he did. Tea couldn’t get his breathing under control no matter how hard he tried. The thought of someone, a human of all things, wanting him this badly had never made him feel so . . . good.

Still his head swam, utterly incapable of recognizing what was actually pleasurable. The rest of him was on board, just not the part he most needed to be. This was wrong, this heady desire was wrong it screamed. It’s not your job to be right anymore, Tea frantically reasoned with himself. Just this once, go with the other’s judgment.

His head protested. The risks are too great, he couldn’t possibly allow this. But fuck, just look at Sasha’s face. Tea had never had someone try so hard to hold back their wants and feelings for his sake.

Tea had wanted a lot in his life, but right then and there? He most assuredly, undeniably wanted to feel those lips on his again.

Risks be damned. Sasha was the Specialist, he could keep a secret.

“Okay,” Tea cupped Sasha’s cheeks, heart swelling as the man turned his head in the skinwalker’s hands to kiss each palm. Fuck, his mouth was hot. How could he stand it? “I have no fucking idea what I’m doing,” the man growled against Tea’s palm, blue eyes sliding part way open to drill holes into Tea’s face. “I want this, but I don’t know what to ask for, so I damn sure don’t know how to do anything slow.”

Sasha’s gaze was predatory, and utterly horrifying out of context. Just as the man’s laugh never changed from situation to situation, Tea suddenly realized there were very few ways to distinguish Sasha’s glare from his desire. “I’ll show you,” was the final growl to cross the man’s lips.

Large hands framed Tea’s face, tugging him forward into another scorching kiss. Tea’s insides were on fire as those hands left his head and dropped to his ass. They squeezed him roughly, startling a moan from his throat. The sound spilled into Sasha’s mouth as the man’s searching tongue parted Tea’s lips and danced with his own. In a hot second, Sasha lifted Tea off the ground and pressed him back into the wall, the skinwalker’s legs winding around the Master’s waist. Tea cried out as Sasha ground his hips against Tea’s core, molten lava trickling down within Tea’s belly. Sasha’s searching mouth found Tea’s neck, teeth sinking into the soft flesh there. Tea let out another shocked sound, this one more canine than before as his thighs constricted against Sasha’s sides and his talons dug into the man’s back. His spine arched from the bites that trailed across his throat without pain.

None of this was hurting, and it was utterly spectacular.

Sasha’s hand slid down between where their bodies were pressed flush together, fingers finding the hem of Tea’s pants and pushing beneath the band. By the time those long, dextrous fingers found the exact spot they were searching for, Tea was starting to wonder if he and Sasha perhaps had a different definition of the word slow. 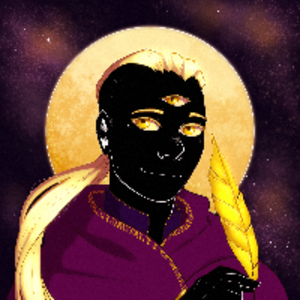 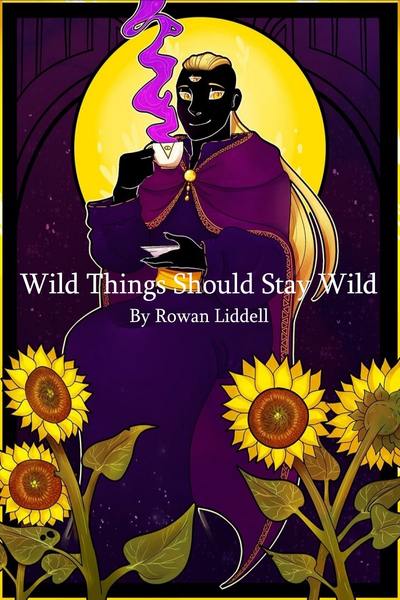 The multiverse is vast, but it feels so small when stories interlock across time and space. It all starts with a skinwalker looking deeper into what it means to be a member of the Red Cord. Over time, he will realize just how much greater his story truly is. A lonely god. A space adventuress. A coven of witches led by terrifying forces. Terrifying forces that resemble those who are familiar. This is the story of Tea, the skinwalker. Of Bard, the God of Other Worlds. Of Allie, the Saint of Boundaries. Of the people they meet and the worlds they find. Welcome to Wild Things Should Stay Wild.
Subscribe 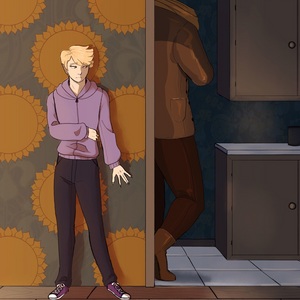