Strings, connected to the heart. A physical form that bonds two people, destined to meet. Everyone has one but... what if... some don't?

Nine years ago, he was officially named as 'unstrung'. Someone who doesn't have a thread and might never. Mio? He was fine. He said so himself. People said it was heartbreaking to hear a barely seven-year old child uttering "It's okay. Love is just a nuisance anyway. I can be much more successful without a soulmate!". They got over it, forgot about the child. Of course, his parents had loved him and he still had friends. Until...

That fateful day. First day of middle school, and just turned eleven, Mio was excited to see his new friends, his new teachers, and most of all, away from his father. Over the summer, after his mom had divorced his father, his dad had been coming home woozier... and sometimes would hurt him for things he didn't do.

Suddenly, things speed up. A hand coming at him, a hurt arm, blood all over his face, classmates giggling, him watching as girls huddled in a corner and whispered about soulmates, and the last, final detail. An orange glint, so beautiful... flashing, then fading, twisting, draining, flickering and stuttering out of sight, all at once.

Mio woke up, his head throbbing and his whole body sore. Why do I always wake up like this...

Since the whole ordeal in sixth grade, he was a very quiet guy. Not like the type that reads alone in the corner of lunch, but more like... the type that bumps into you, helps you pick up your stuff, smiles and utters a quiet "sorry" and he disappears from memory. These things happen because people are so transfixed on being loyal to their soulmate, future lover, and not on being friends.

He was okay with that.

Remember that line? "It's okay. Love is just a nuisance anyway. I can be much more successful without a soulmate!"

That all washed away when they left him, both of them. His mother left his father and left Mio with him. A couple years past and his father started coming home drunk and lightly abusing Mio. A few more weeks and it got to the point that he had to run, run away from his dad chasing him with a broom, his dad who had once loved him and never even thought about hurting a single hair on Mio.

Then one day, he came home from school to find, his beloved father, the one abusing him so much despite Mio's love for him, hanging from the door frame, with a rope tied around.

He ran, ran and ran and ran. Deep into the unknown city. He was about 13 at the time.

But still, Mio thought to himself while changing, Wouldn't it be nice? Nice to have someone you can confess to, a cuddly teddy bear, someone to say "Its going to be okay." even when It won't be?  He shakes the thought off, ready to tackle the day of mindless school and more, mindless work.

Arriving at school, the air was abuzz with news and excitement. "I heard there was a new student!" Mio couldn't care less. Brushing back his fluffy pastel purple hair, he walks past the girls into his class.

Making his way to his seat, a stranger was sitting at a desk beside it. A chair squeaks as Mio pulls out his seat and stuffs his notebooks into the hollow table. He pulls out a dull book and start reading.

The guy turns around to face him, with a friendly smile on his face. His eyes blink at the stunned purple haired male beside him. "What?"

Those stunning orange eyes... Could it really be-"Jade?!" A twisted smile of pain crosses his face. "Wha- How- Where-" He laughs quietly and hysterically. No one notices this meltdown except for Jade. "Hey, are you Mio?" he asks softly and still with a light smile on his face.

"Jade?!" He repeats, this time in whispers.

The memories locked up to save himself come whirling back. Again, in short bursts. A soft palm, light sunrays, quiet and comforting words, a reason to live when he was about to go. Jade. The one who taught him how to use a camera a take beautiful pictures, ones that captured the moment, captured the pure happiness radiating from the pair of eleven year olds. Some might say that was too young of an age to know true love, but these two, Jade and Mio, where inseparable.

Of course, all happy things must come to an end.

Jade was forced to move away before the time high school started. Then Mio? He just returned to his pre-love stage.

Once more, his world dulled to gray, the colors dashing and swirling away. Accept for a tiny glimmer, a small rainbow of colors, contained in one bracelet that gave Mio even a tiny shard of hope. The hope that Jade, his Jade would be back. So he didn't jump into the foaming waves. Didn't tie the final knot or step off the stool. Didn't stare into a silver refection, wondering if he was something to someone. Because he knew that even if there was no red string connecting him and Jade, they would be lovers forever.

Those eyes. The eyes he had dreamed of seeing so many times again, finally are there, there in front of him. His Jade had come back. He knew it. But his heart, his heart that once Jade left, wasn't confident enough and built up a wall, that heart melted. Maybe... maybe happiness can be a thing again?

They decided. Mio's thread had finally appeared. The one connecting the two. Finally. They tied a bow, pinkie swore. To never leave the other again. Mio was happier than ever before. Not a thought of ending it had come in the past four months. Ever. It was the happiest time, having someone to love, finally, having someone to confess and cuddle. Someone to cry with. One unafraid to comfort.

But remember what was said before?

All good times must come to an end.

Jade was caught over the phone, cheating on Mio. "Oh Jade~ Who's that?" a voice croons in the background. His [Mio's] source of life over the last four years? Gone. In an instant.

He was never pulled away from the edge. Just left there to teeter. And when something tiny nudged him, it was all it took. All it took for him to fall over the edge.

When Jade got home that evening, all he saw, was a note. On a flowery piece of paper in Mio's beautiful scrawl. "I still love you."

Mio looked down at the waves, beautiful and frothing. He looked up at the dirty brown bridge at the the letters carved there three years ago. Mio + Jade Meaningless. Once full of adventure, full of passion, full of love. One last look at the yellow, orange, pink, and purple sky in front of him. The very first picture Jade taught Mio how to take. It was blurry with tears, somehow making the colors blend together beautifully.

Removing the bracelet inlaid with a green stone. Jade.

One last look, one last glance, one last breath, and one last step.

A splash in the waves, disturbing the water for a second before settling. Once returning to it's beautiful state.

He sunk. So deep. The salty tears blending with the foam. And finally, peace.

Jade's world faded to grey. A snapped string, a missing heartbeat beside his at night.

Then, blinding sunlight and fluffy purple hair over his face. "Wake up~" says Mio. His Mio.  Dried tears mat his black hair and stiff on his face.

They relax, holding each other and knowing the other will never leave the other. Ever.

In the whole wide world, there is no heart for me but yours. -Mio

And in the whole wide world, there is no other love for you but mine. -Jade 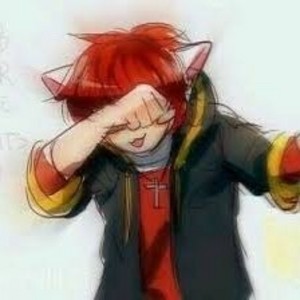 Um, well... First competed story...
Tell me if you liked it please T^T
(oh and tell me if I missed anything)
(like warnings, spelling, or the mature content thing) 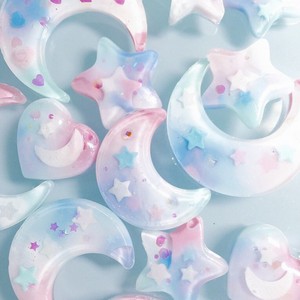 ☆Just random stories
☆Some could be anime, I dunno yet ;P
☆LGBTQ+ friendly uwu
☆Requests: Open (story base plez)
Subscribe 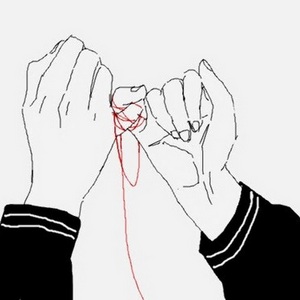