The scent of fresh, ripe peaches wafted across Peach Grove as Ai leaned against one of the trees. A twig above him snapped and beside him landed his companion, arms full of sweet fruit. They handed one to Ai and the two sunk their teeth into the soft flesh. Ai looked over as his companion finished a peach and licked the juices off their fingers. They stretched and sighed, then met gazes.

“Will we see each other after your God Training is over?”

Ai had to look away. The artificial heavenly sun was setting over the horizon and Ai squinted from the glare. “Maybe.”

A pressure fell on Ai’s shoulder and he looked over to find his companion’s fluffy head of hair. The grass rustled as their hand slid atop Ai’s. “I hope so. Even if at that time, you don’t remember me. I still hope so.”

Ai blinked his eyes open to find himself in Jun’s apartment on the couch, where he’d fallen asleep. A sense of loneliness weighed on him, so he grabbed his Tokagi plushie and nuzzled it to his chest. “Where are you, Jun?” Ai mumbled. He wanted to play Mortal Fight together.

As if on cue, the front latch sounded. “I’m home,” Jun’s voice sounded despondent and so Ai wasn’t surprised to see the matching look when the man stepped into the living room.

Jun sat down beside him. “Remy and I mutually decided to just be friends. Hey, maybe you should go back to Heaven. I can’t find the action figure and things didn’t work out with Remy…”

Ai didn’t take Jun as someone to give up that easily. But it had already been a month. Ai didn’t exactly know what he was doing, but he could try harder. He stood up.

Jun dashed for the broom.

“I’ll work twice as hard!” Ai announced. He looked at Jun then raised an eyebrow. “Are you about to clean? Aren’t we about to leave for work?”

“I thought you were about to do magic.” Jun’s shoulders relaxed.

“I promised I would only do magic outside.”

Jun glanced through the glass door to his balcony covered in flower petals.

“Let’s go!” Ai grabbed Jun’s arm and headed towards the door before the human could start complaining.

Since being told that Ai was Jun’s cousin, Mr. Kent and the other staff had gotten friendly with Ai. He was allowed in the break room and had a special spot at the bar in front of Mr. Kent’s coffee-making contraptions.

“Why don’t you understand, Mr. Kent?” Ai sighed. “It was supposed to be a seinen about negotiation and humanity but became this weird magical girl romance thing! The endearing alien god became the villain! You can at least understand how that’s upsetting?!”

Mr. Kent smiled sheepishly. “Uh, Ai, you’re a little loud. Ah, that reminds me.” He set down the drip coffee. “What do you think about working here while you’re saying with Jun?”

Ai looked behind him at Jun dashing from table to table, interacting with every customer with a smile. He headed their way to give an order to Claus and immediately grabbed finished plates as they were set down. Jun was working so hard. The least Ai could do was help. And he could use the money to buy his own manga so Jun could contribute more to snacks. “I’ll take it.”

“Take what---oh, the job. Ahah, great. I have a spare uniform, Shelly is going to be out today, so if you could help now, that’d be a big help.”

Mr. Kent led Ai to the back storage room and handed him a uniform. After putting on the slacks, shirt, and waist apron, he stepped onto the floor. Jun was nodding in farewell to a customer then turned around and stumbled back. “What---don’t tell me…”

“Ai agreed to help us out.” Mr. Kent placed a hand on Ai’s shoulder.

“Don’t worry, Jun. I’ve watched enough Workers!!! to know what to do.”

A group of girls entered the cafe and Ai went to greet them. “Welcome back, my la---”

Jun slapped the back of his head.

Oh right, this wasn’t a butler cafe. “Please, follow me to a seat, dear customers.”

Now that Ai thought about it, a maid cafe wouldn’t be so bad. Jun would be the tsundere one who looks cute but beats up the annoying customers for the other girls. Jun didn’t even have to be a girl to do it. Ai didn’t mind the wholesome crossdresser trope. Even better if they got manly at times while still wearing a skirt. The BL manga Remy had lent Jun wasn’t bad but he would be curious to see a more interesting and outrageous plot. If they decided to stay friends, did that mean Remy was still going to lend Jun more manga or did Ai have to go to the BL section himself?

“Um, Ai…” Ai looked up to find Mr. Kent looking at him with his characteristic sheepish smile that currently looked a bit annoyed. “Please stop daydreaming and go ask the order of that couple over there.”

Ai went over to a couple seated at a table by the side windows. From the atmosphere, it was clear they were on a first date. It would take Ai only a handful of magic to see the history of the guy but another handful to see the girl. The thing was that they matched, but they looked so adorable that Ai wanted to give them a push.

He took their drink orders and watched from afar as he prepared their beverages. They were so awkward around each other. Ai had to give a push. He let some petals out in an empty pitcher as he examined the guy’s history. Tommy had grown up with Neera but they were never more than friendly classmates. After joining the same college club, Tommy realized it was his chance to get closer. After the bonfire is when he asked her out on a date and she agreed. Quickly, Ai got a genius idea.

“Here you are” Ai said ten minutes later as he gracefully set down a plate of pasta. “It’s on the house.”

The two blinked in surprise. “That’s so kind of you,” said the girl.

“Thank you,” the guy agreed. “Uh, can we have some sharing plates?”

The couple looked flabbergasted. Ai bowed. “Please enjoy.” He snuck behind the counter to watch them bashfully pick up their forks. Both were blushing deeply. Ai snickered. He grabbed an empty coffee pot from underneath the counter to hide the flower petals he was about to drop.

Jun was at the other end of the counter and spotted Mr. Kent looking over at the couple. He turned to see what was so interesting.

The guy and girl each had a noodle in their mouths.

Claus peeked out from the kitchen. “That’s rude, Mr. Kent. He’s not a bad looking guy.”

Claus tilted his head. “All our noodles are the same length.”

“They’ll bite it,” Mr. Kent shrugged it off.

They watched and the girl tried and tried to bit the noodle but it didn’t slice. It was like rubber.

“Ai,” Jun snapped, suddenly beside him. “What did you do?”

The guy tried slurping the noodle, hoping it’d help him get to the end faster.

A bang came from the table and the whole restaurant’s eyes shot over. The guy was standing up, hand on his throat. Ai quickly cut the noodle magic and dashed over.

Grabbing him from behind, Ai did the heimlich and the noodle shot out, landing on the girl’s braid. The man coughed and resumed normal breathing as he dropped to his knees.

Ai felt a tiny menacing aura from behind him. A low, grumble called his name. “Aiiiii….” Ai didn’t dare turn around. Jun was going to kill him.

Tom panted. “Neera. That close call with death made me realize something. Life is only so long.” He looked her in the eyes. “I’m going to grab love by the reigns. Neera, I love you!”

Neera spilled a tear. “I love you too, Tommy!”

“That’s way too convenient!” Jun lamented. The couple hugged and the restaurant broke out into applause and congratulations. Ai was off the hook.

-A chapter from Ai's perspective! xD What do you think? 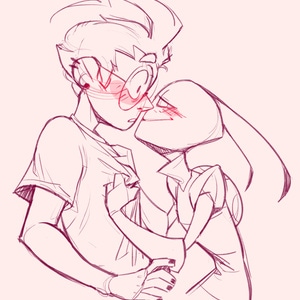 It was so cringy at times, it made me laugh.

Great job on the chapter.