“Sorry I’m late!” I called out as I emerged from behind a door marked ‘Employees Only.’ It wasn’t the first time I’d hastily changed in the break room, and it probably wouldn’t be the last. My manager was blissfully lenient, but at least I had a good excuse today. “Somebody threw up on the bus again. They had to pull over this time.”

“Don’t worry about it, kid,” he replied as he scrunched up his nose in disgust. “I figured something must have happened. I had Becky seat everyone in Rose’s section. Well, everyone aside from the one who insisted on his usual booth.”

“You’re the best, Di!” I said with a smile as I tied an apron around my waist. I pulled my long hair back into a practical pony tail and smoothed out some nonexistent wrinkles to polish off my uniform. Weaving past a carefully organized stack of menus, I set off towards the dining room to begin my shift.

It was a sunny afternoon, almost blinding with the snow glare from a recent blizzard, but you’d never know it with the dim lighting in here. It was supposed to be for ‘ambiance,’ but it certainly wasn’t very helpful for reading. It was no wonder why this particular regular preferred his window seat. The light here was better than anywhere else in the whole diner. That it happened to also always  be in my section was surely a coincidence of little significance.

“They said you were running late,” he spoke from behind a newspaper. “I was starting to worry.” His face was hidden, but the calm tone of his voice hinted that his concern was all politeness.

“Oh, no need to worry about me!” I waved him off modestly, “You know how public transit can be.”

“You don’t drive?” he asked as he carefully folded his newspaper and set it aside. His brown eyes seemed to scrutinize me. I ought to have been unnerved by his searing gaze, but I’d waited on this man several times before. I had long since grown accustomed to his quirks, and couldn’t bring myself to feel alarmed by his intensity.

I blushed and chewed my lip a moment before admitting, “I don’t have a car, sir. Not yet, anyway. I’m saving up for one.” This particular fact was always the biggest blow to my pride, somehow, despite the fact that I was a college drop-out waiting tables at a low-end diner. I immediately regretted telling him, because now he’d know how miserably I failed at being an adult.

He mumbled almost inaudibly and ran a hand through his dark locks. When he spoke, I was happy that he’d chosen not to comment on my situation. “You don’t have to call me ‘sir.’ Please, it’s Emile. Em, if you’d like.”

“Emile, what can I get for you today?”

“What do your friends call you?” His gaze flicked to the name tag on my chest and back before he continued, “Do you have a nickname, Noel?”

“No, I do. It’s ‘No.’ My best friend, she calls me ‘No-No.’ It’s pretty embarrassing, now that I think about it,” I realized that I’d probably shared more than he cared to know. “But Elle is fine, too.”

He grinned and his dark eyes shimmered with warmth, “I’ll have a coffee—black. Whatever the soup of the day is, that’s fine. Oh, and a pastry of your choosing. You know what I like.”

I nodded, because I did know what he liked. He was in often enough for me to take notice of his preferences. I slipped off to the back, and a coworker stepped up beside me to put in an order for one of her own tables.

“So, has he asked you out yet or what?” The other waitress gestured behind her in the vague direction of Emile’s table.

“W-what? Rose! No, don’t be ridiculous,” I sputtered as I adjusted my glasses. It was a nervous tic.

“Oh, come on! He’s interested. He’s in here almost every single day, and I guarantee you it’s not because of our mediocre desserts.”

“He must work nearby, that’s all.”

“Yeah, keep telling yourself that!” she called out a little more loudly than was necessary. I prayed that nobody heard her as I walked away with coffee in hand.

I placed the steaming mug in front of my sole customer and retreated before he could notice the flush spreading across my face. It was damned obvious, because my pale skin did little to hide my emotions. Thankfully, I could use the need to ready the rest of his order to make myself scarce. If I appeared busy enough, exertion might excuse my reddened cheeks.

His order was simple, so I didn’t need much time to get it together. I was about to head back out when Rose grabbed my arm to get my attention.

“I was only teasing, Noel. You know that, right?”

“It wasn’t funny,” I hissed. “What if he had heard you?” I’d never be able to overcome the embarrassment if he had.

“Well, forgive me for not caring. He hurt my feelings, you know.”

“Hey,” she shot back defensively, “I didn’t do anything wrong! I just tried to do my job. Your job, actually. I offered to take his order, since you were running late. But he wouldn’t have it, said he didn’t mind waiting for you to come in.”

I was pleased to know that he preferred me over Rose. He was my favorite customer. He was always polite. He never complained about anything. He was a pleasure to serve, and a generous tipper to boot. And he had great hair. It was long for a man, falling in thick black waves nearly to his shoulders. My fingers itched to test its softness. I chased that last thought away before I could dwell on it further, “I’ve got to get this order out, before the soup’s cold.”

Rose stepped out of my way and pouted, “Why are all my regulars sad old people who don’t tip well?”

I returned to his table and deposited the soup and pain au chocolat. He glanced at my choice of pastry and smiled at me in approval. He was exceptionally handsome when he smiled. I could feel the heat rising in my cheeks once more, and adjusted the position of my glasses in an attempt to hide it. My relief was immense when I noticed more customers arriving. I skittered off to attend them.

Today marked the first time he’d told me his name. I already knew it, from his credit card receipts, but it was different actually hearing it from him. Actually having permission to use it. Emile was a pretty name, for a man. It suited him. It sounded French—was he French? Could he speak the language? I’d bet that he could, and somehow the thought of him being bilingual made him even more attractive in my eyes. The new tables needing service spared me from thoughts that were quickly wandering into dangerous territory. Being busier was just what I needed; time passed easily with more work to do.

Emile had gone before I knew it. It wasn’t until I was bussing his table that I spied something out of place. It was unusual for him to leave anything behind. He was a very tidy patron, which added to his appeal. He had left the customer copy of his credit card slip. It was tucked under his mug, resting safely with the tip left for me. Rather than toss it into the trash, I turned it over. On the back, there was a note scrawled in pen:

For the next time the bus fails you. Call me if you ever need a ride.

I stared at the receipt in shock for a moment before stashing it in my apron pocket. I couldn’t risk letting Rose see—I’d never hear the end of that. I could hide the evidence, but I couldn’t hide the stupid grin that’d plastered itself across my face. On my break, I quietly plugged the contact into my phone.

You can download the complete story of No Elle for FREE* via Gumroad right now! Or you can read it FREE here on Tapas. It'll post biweekly until all chapters are up. 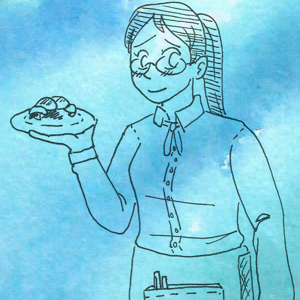