I stood at the bus stop the next morning. The benches were all too crowded for me to sit on, with the bus due to arrive any minute now. I rubbed my hands together and puffed a warm, foggy breath against them to keep warm. It was early and freezing, and Vee was out of her mind. I should just get on the bus this morning, like usual. My heart skipped a beat as I felt my phone buzz in my pocket.

Vee:  I’m going to be SO mad if you chicken out

I responded: I don’t think I can do this.

Vee:  Stop over-thinking it and CALL HIM

Vee:  He wouldn’t have given you his # if he didn’t want you to use it!

I suppose that was a solid enough argument. Maybe it was the cold getting to me, but I was convinced. With trembling fingers, I brought up his contact details. I hit the call button before I could lose whatever nerve I had mustered up. He picked up on the second ring.

“Elle!” The recognition in his voice was clear, “Hello.”

“I am so sorry to bother you this early,” I spat perhaps a bit too rapidly, “I hope I didn’t wake you up.”

“I just missed my bus,” I paused for a moment to muffle my phone. I couldn’t risk him hearing the sound of the bus pulling up next to me. The brakes squealed as it screeched to a halt at the curb. Everyone waiting, except me, quickly shuffled through its open doors and out of the wind. “Do you think you could give me a ride to work?”

He was quiet for a moment, and I was worried the call had dropped. Or worse—that he was going to apologize and say that he was busy. The doors were closing and the bus was preparing to depart. If he said no, I was going to be screwed. I’d never make it to work on time. Just when I was about to spiral into panic, I heard his deep voice say, “Text me your location. I’ll be there.”

He hung up without saying goodbye. I did as instructed, and parked myself on a freshly vacated bench to wait for him. Fifteen minutes later a black car pulled up in front of me. I don’t really know a lot about cars, but it looked pretty expensive to my uneducated eye.

“I’m really sorry.” I was apologizing for the inconvenience, but also secretly for lying to him. Dark sunglasses hid his eyes, so I couldn’t read his expression. Hopefully he wasn’t too annoyed with me.

“Get in,” he said, “And don’t worry about it. I turned on the seat warmer for you. I’m sure you’re freezing.”

‘Suspicion confirmed,’ I thought. If it had seat warmers, the car was definitely expensive. I’d be lucky if I could spring for something that had freaking crank windows and a cassette player. I slipped in silently. I prayed he’d think my flushed cheeks were from the cold air. I was completely out of my element. This was a horrible mistake. I pulled out my phone to text Vee.

Noel: I did it. I’m in the car. This is so awkward. You are full of terrible ideas.

Noel: I hate you.

Vee: Stop being a nerd

Noel: What if he’s a murderer? I barely know this guy.

Noel: I could end up cut into little pieces, stuffed into trash bags & dumped on the side of the road

Vee: Wait you’re not sitting in silence while you’re texting me right?

Vee was right. I need to talk to Emile. I was making this weird and blowing my chance. He probably dropped everything at a moment’s notice to come help me out this morning. I really shouldn’t have asked that of him, and I shouldn’t have lied about missing the bus. I was manipulating a nice guy! A hot nice guy! Oh god, was he going to be late for work because of me?

“Uh,” I sputtered awkwardly, trying to think of something, anything, to talk about. I spied a flag keychain dangling below the ignition. I was reasonably confident in my ability to identify the country. “So, are you French?”

“My parents were,” he stated, “I was born here after they immigrated.”

Oh thank God. This would give us something easy to talk about. “Do you speak the language?”

I laughed at the very idea. “No. I took a couple months of French in middle school, but I don’t remember much. I can ask for permission to use the bathroom, but that’s not really very useful in the real world.”

“Have you ever been to Paris? Is it as romantic as they say?”

He paused before responding simply, “I have. It’s not.”

“But everyone says it’s so lovely!”

“Have you ever been to Philadelphia?”

“It’s a lot like that, but everyone speaks French.” His tone was decisive. I couldn’t help but interpret it as a little condescending. I wished he weren’t hiding behind those damned sunglasses, so that I could have a better idea of how receptive he was to this pathetic conversation. Just as I was about to start biting my nails, he continued, “The countryside—the chateaus, they are much prettier.”

“I’d love to see Chenonceau some day,” I sighed. I’d seen pictures of that gorgeous fairy tale castle, with its perfect mirror image reflected in the waters below. It must be breathtaking in person. Vee was always talking about how it was rumored to be haunted, but I didn’t believe in nonsense like that.

It was quiet again after that. This time, he broke the silence. “Do you mind if I smoke?”

“Of course not, it’s your car.” Honestly, I would prefer if he didn’t smoke, but at least he was courteous enough to ask. He did crack his window as he lit up, despite the cold. As much as I disliked the habit, I also had to admit to myself that he painted a fine picture behind the wheel, with the wind blowing through his dark hair. I couldn’t help but think that it suited him as he casually exhaled the smoke. But it definitely wasn’t a habit I was about to encourage, “You should quit, you know. It’s bad for you.”

He flinched a little at my words, obviously having heard them before. I immediately regretted saying anything. I probably shouldn’t lecture the guy who’s nice enough to save me from my imaginary bus problem.

“I do know, Elle. It’s not healthy. I should quit, but I don’t have the will to stop myself.”

Emile pulled up in front of the diner moments later. Despite ‘missing’ my bus, I was actually a few minutes earlier than usual. It was a lot faster without having to brake for every bus stop. I thanked him for the ride once more and waved to show my gratitude as he drove off down the street. I pulled out my phone again as I stepped inside to prepare for my shift.

Vee: Name your firstborn after me

I noticed the smell of smoke that lingered on my clothes and hair. It brought a smile to my face. 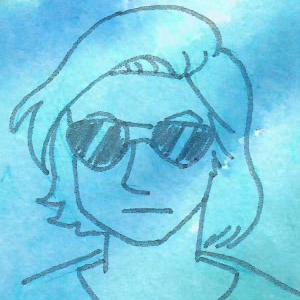