When Emile didn’t immediately react to my kiss, I started to think I’d made a horrible mistake. Worst-case scenarios began to reel through my head at an incredible pace. Maybe I’d misread the situation between us. Maybe he hadn’t been flirting with me. Maybe he’s just taken pity on the poor, pathetic waitress who didn’t have a date to her friend’s New Year’s party. Maybe he wasn’t interested, and only came tonight because he had nowhere better to be. Maybe I’d just assaulted him with an unwanted advance. I pushed myself away from him, immediately severing all contact.

Emile carelessly tossed his still-lit cigarette butt out onto the lawn. Had he been holding that a moment ago? God, my timing was awful. I prepared to stutter my way through the world’s most awkward apology. But when I moved to take another step back, I didn’t get the chance to retreat. His arms were already around me, gently drawing me closer. I offered no resistance. His grip was sure and steady, and his gaze unwavering. If he was plagued by any of the hesitation and self-doubt I struggled with, he sure was good at hiding it.

As I melted into his embrace, he leaned down to me. As he whispered in my ear, the heat of his breath sent a shiver down my spine.

“No turning back now.”

“No,” was all I could reply. No, I couldn’t go back to pretending like he was just some attractive customer I served at the diner. Not now, not after I knew how perfect it felt to be in his arms. I knew there wouldn’t be any coming back from this. It was as if every poor decision I’d ever made, and every shitty relationship that had ever broken my heart, it was all worth it. I’d go through everything again, if only it would eventually bring me to this moment.

He carefully angled my chin and kissed me—not like the innocent, childish peck I’d given him, but a real kiss. He kissed me as if he’d done it hundreds of times before. As if we were made for each other. I could taste both his cigarette and the bitterness of the wine we’d shared, but I didn’t mind. It suited him. I twisted one of my hands into his hair, which was exactly as soft as I’d hoped it would be. My other hand clung desperately to his jacket, pulling him closer. The lapels were definitely going to be wrinkled. I didn’t care, and I suspected he didn’t mind either. We didn’t separate until the need for air overcame our need for each other.

I gazed up at him in awe. He was a wreck: his hair was mussed, his lips were flushed, his blazer disheveled. Something about that, combined with the resolution of the tension between us, was suddenly hilarious to me. I buried my laughter in the crook of his neck.

“Come along,” he said as he peeled himself away from me, catching and holding one of my hands in his own. “It’s cold. Let’s get you inside.”

I hummed my contented agreement as he led me away. I’d barely closed the door behind us before Vee tackled me, knocking the air from my lungs.

“I NEED TO TALK TO YOU,” she announced, “Girl talk. In private,” she clarified before dragging me away to the bathroom. She was talking loudly, even by her own standards. I wondered how much she’d had to drink. After closing and locking the bathroom door she blurted out, “I think I’m going to marry her.”

“She gave me the shrimp!”

“The Shrimp Showdown!” Vee whined, obviously annoyed at my misunderstanding the significance of whatever she was trying to tell me, “She won! It was the hottest thing I’ve ever seen. And she gave me the shrimp. No-No, this is serious. This is the real deal. I think we were made for each other. I think I’m in love.”

“I think you’re drunk,” I laughed.

“Well, so are you!” She huffed, “And you don’t see me sneaking off to the porch to make out with anybody.”

My eyed bulged, “Oh my god! Please tell me nobody else knows!”

“Wait—you really did it?” Vee gasped, “No-No, I’d have never thought you had it in you! Not in a million years!”

“Thanks for your confidence in me,” I said sarcastically. She had a point though—if I hadn’t been tipsy, I probably wouldn’t have been bold enough to make a move. Every other relationship, I’d always waited for the other person to act first. I was ready for things to be different this time.

“Look at us,” she said, “Best friends, finding love at the same time. We could have a double wedding!”

“We’ll see,” I laughed as I unlocked the bathroom door and made my way back to the party.

I found Emile in the kitchen opening the second bottle of wine. He poured us each another cup, and I scooted my chair in close to his. Close enough that I could hold his hand or lean on him. I took turns doing both as we drank. I couldn’t remember finishing the bottle, but I did recall noticing that it was empty by the time we decided to leave.

I’d ridden over with Vee, but she was too drunk to drive now and was going to crash on the couch with Liz. Everyone else who hadn’t planned to stay over had already left.

“Matt can drive you home,” Tomie offered, “He hasn’t had anything to drink.” Of course he didn’t. He never did. Whether his perpetual sobriety was out of solidarity towards his longtime girlfriend or just out of disinterest in anything fun, I wasn’t sure.

“It’s only about a mile, we’ll be fine.” I’d made the walk alone before. And sure I was a bit sloshed, but this time I had Emile to escort me. Come to find out, his apartment isn’t that far from mine. It was actually closer than mine was to Tomie’s. And instead of walking home himself, he was willing to go out of his way to see me home safely, like a true gentleman.

Tomie was skeptical about the idea, but ultimately relented at my insistence. I did have to agree to text her when I got home safely. She said if she didn’t hear from me within an hour, she’d send Matt out on a search and rescue mission. I didn’t doubt that she meant it.

Emile dressed me in his coat and we set off together. Normally a brisk walk home would be sobering, but between the wine, my heels, and the frost slicking the sidewalk, I wasn’t able to maintain a decent pace. I was starting to think that maybe I was more drunk than I’d thought I was. I definitely appreciated the steadying arm I’d been offered for support. We joked and laughed and it made the cold walk much more tolerable. Every time we had to stop and wait at a crossing, he’d press a gentle kiss to the top of my head. He was so sweet.

I’d earned about five kisses before I took an awkward step on an icy patch and damn near fell on my ass. Emile was able to prevent me from falling, but somehow I’d managed to break the heel of my shoe in the struggle.

“Fuck,” I said without elegance. We were only about halfway home, and now I was down a shoe. Even if we turned back, I’d still have to make it there on one foot.

“Call your friend,” he offered reasonably.

“I’ll wait with you until they can come.”

“You don’t know Matt. He has one good eye, and he drives like a grandpa. It’ll be faster without him.” I made a little one-footed hop to prove my point.

“Mm-hm,” he murmured, obviously unconvinced. Before I could make another defiant hop, he swept me up into his arms in a bridal carry and continued down the street.

I protested immediately, “It’s too far! You can’t carry me the whole way.”

I mumbled my next statement into his shirt collar. It was completely inaudible, even to my own ears.

“I said, your place is closer,” I repeated.

He paused mid-stride, but didn’t reply. I nodded into his shoulder, too shy to meet his eyes. We changed course.

Marked Mature only because Noel drops another F-bomb. Once again--sorry to anyone who was expecting something more! 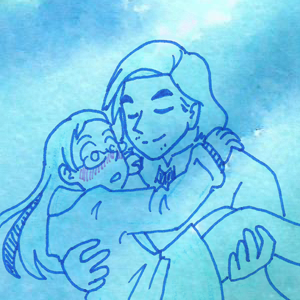