I never liked it when my ex would pick me up. I actually hated it. I’ve always been of average size for my minuscule height, but I would feel so heavy when I’d notice his skinny arms trembling under me. If my weight was a burden to Emile, he showed no signs of it. His steps were swift and even, and his broad shoulders were strong beneath my touch. His easy laughter didn’t seem to be hiding a grimace, and he never once stumbled over the three blocks it took us to get to his door. It would have been quite a feat even if he were sober; as things were, I was considerably impressed.

He carried me across the threshold before delicately seating me on the carpeted stairs just behind the front door. He knelt down and freed me from my broken heels, and I would’ve been really moved by such a tender, thoughtful gesture if I wasn’t so overwhelmed with relief to be rid of the damned things.

“Do you think they can be repaired?” he asked as he helped me out of his coat.

“It’s not worth it,” I said, “I’m going to trash them.” They were expensive, but uncomfortable to begin with. It wouldn’t be a huge loss.

“A pity,” he said as we carefully picked our way up the staircase, “They looked lovely on you.” I blushed and tried not to fall on my face back down the steps we’d just ascended. The shoes had definitely served their purpose. I ought to mourn them with a viking funeral.

His apartment was smaller and simpler than I would have expected. The stairs led right to a combination living room and kitchen. The décor was unrefined and utilitarian in a way that screamed ‘bachelor pad.’

“I only just moved in recently,” he explained before I could ask, “I left a lot in storage for the time being.”

I sincerely doubted that he had any intention to liven up the place, regardless of whatever was supposedly still in storage. My gut feeling told me that he was a workaholic who didn’t mind a strictly practical home. He always looked really tired. Such a cold space had to feel incredibly lonely. I could help ease that.

Somehow I remembered to text Tomie, so I wouldn’t have to deal with her freaking out later. I pulled out my phone and sent her a thumbs up emoji so that she’d know I was alright.

My phone immediately vibrated with her response: Home safe?

I sent back: Safe.

I wasn’t exactly home, but what she didn’t know wouldn’t hurt her. Except, she was very clever and obviously had seen through my omission. My phone buzzed once, then again two more times. I decided to leave her messages unread while Emile took me on a brief tour of his apartment. It started with the bathroom, which was just past the stairs. It was tidy—a good sign, I thought. Too many of my friends had told me horror stories about bathroom conditions so nightmarish that they’d ended relationships before they’d even started.

The living area had a decently comfortable looking couch, and a nice entertainment center. A tablet was charging on a corner table. The opposite wall made up the kitchen. It looked as I would expect, considering how I already knew that he must eat at The Webb more often than he cooked at home. Beyond that was a door that led to his bedroom. It was a large room, and looked even bigger due to the lack of furnishings. The soft gray comforter was too tempting to resist, so I crawled under it as soon as I got a chance. It was thick and lovely, but didn’t offset the irritating scratchiness of the sheets beneath. I was just about to close my eyes when my damned phone started vibrating again. It was a call this time. I let it go to voicemail.

It wasn’t until Tomie’s second call that he asked, “Are you going to answer that?”

“No!” I huffed petulantly through the soft walls of the cocoon I’d snuggled myself into.

Emile rifled through some drawers and tossed a change of clothes onto the bed, “You probably shouldn’t sleep in the dress.”

He was right. Not only would that be uncomfortable, but it would definitely wrinkle the garment, which would interfere with my plans to wear it again before cleaning it. I temporarily discarded the comforter and hopped off the bed.

“Help me with my zipper.” I didn’t actually need help, but I was testing to see how willing he was. He turned out to be very compliant.

I grabbed the clothing off the bed and headed to the bathroom to change. I washed my face and patted it dry on a conveniently placed towel. I was into this guy, but we were definitely not at a toothbrush-sharing level of intimacy, so I just pilfered some toothpaste and rubbed it around on my gums with a finger. It wasn’t ideal, but it was better than nothing. I undressed and hung up my dress and bra on a hook I’d found on the back of the door.

I slung on the black t-shirt I’d been offered. It was baggy on me and fell past to the top of my thighs. Emile had offered a pair of boxers as well, but I could tell by looking at them that they’d probably fall past my knees in a really unflattering way. It wasn’t a look I was prepared to rock, so I opted to leave them behind as I exited the bathroom. I was wearing cute panties, and I was still drunk enough to feel no shame. If Emile happened to enjoy the view I was offering, so be it. I found him laying on the couch. He was in an undershirt and had taken off his pants. I’d never seen him in anything less formal than a button down shirt before today, and I was pleased with how familiar we’d become in such a short time.

I curled up by his side and pressed a kiss to his throat, “You’re not going to sleep here, are you?”

“You’re drunk,” he protested with a tone of finality.

“So are you,” I countered. His tolerance might be stronger than mine, but we’d matched each other cup for cup. That meant we’d drank about a bottle of wine each, and there’s no way he wasn’t feeling that.

While on some level, I surely appreciated the chivalrous nature of his offer to sleep on the sofa for my sake, I was also annoyed by his stubbornness. I suddenly had a thought, “Do you have any other blankets? Besides the ones on your bed?” I’d seen his whole apartment at this point. I’d bet money that he didn’t keep spares laying around.

He paused to think for a moment before conceding, “Shit.”

I tried not to be smug as I led him back to his bedroom. I discarded my glasses and phone on the nightstand, and we climbed under the gray comforter together. He kept his back turned to me, which wasn’t ideal, but I was soothed by the warm body heat he radiated. It had been a long time since I’d shared a bed with anyone. There was something I found comforting about it; I passed out not long after my head hit the pillow.

When I awoke, the sun was up. It was fucking blinding, so I winced and pinched my eyes shut. Emile must have shifted at some point as he slept, because he was clinging to me like a baby koala. It was kind of cute, and I didn’t mind spooning. But my fucking head was pounding, and I needed to muster up the fortitude to go raid his medicine cabinet for some relief.

When I was brave enough to try opening my eyes again, I found that there were two bottles waiting for me next to my glasses: ibuprofen and water. He couldn’t have placed them too long ago, judging by the condensation on the still-cool drink. He’d even plugged my phone in to charge. None of my partners had ever been so considerate before, and I thanked my lucky stars for this blessing of a man wrapped around me. I washed down a dose of pills with the entire water bottle before checking my phone for the time. I saw that there was a voicemail from Tomie. I also had several unread text messages, but that was something I could deal with when I wasn’t so hungover. I didn’t have to work until five, and it was still ungodly early. I contentedly allowed myself to melt back into the pillows.

Still only marked Mature due to protect innocent eyes from swears. Sorry, folks! 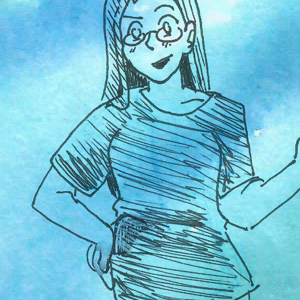