On Wednesday afternoon, I had plans with the girls. Schedules permitting, we always tried to arrange a lunch the first week of the month. Vee picked me up on the way to our favorite spot. Tomie arrived not long after we’d claimed a table, and she made a point to shoot me a dirty look before sitting down to join us. She was definitely still pissed about New Year’s. Knowing her, she would be for a while. I was trying not to let it get to me, but it was hard. She never cared for any of the guys I was interested in. I knew that I couldn’t expect that to change now, but it’d always been a sore spot between us. She probably thought Emile was some kind of gross old pervert preying on a younger woman. Eventually, she’d see the truth—that he was a good guy, and that I was mature enough to be in a relationship with an older man without being a victim.

“Well,” Vee began to break the ice, “I am officially in love.”

I rolled my eyes. “Isn’t that a little dramatic?” She always fell in love fiercely, often very early into relationships, but this was a new record even for her. It inevitably led her to heartbreak.

“I like Liz,” Tomie said more to me than to Vee. I knew that what she really meant to say was that she did not like Emile.

“We barely even know her,” I spat back defensively. She was such a hypocrite, denouncing Emile while praising Liz. She’d met them both the same night! It wasn’t fair.

Tomie’s eyes narrowed as she spoke, “Actually, I spent a lot of time with her on New Year’s Eve. Which you’d have known if you weren’t drooling over Grandpa all night instead of hanging out with your friends.”

“She’s the perfect woman.” Vee sighed in a dreamy tone, “An angel sent from the heavens.” She seemed completely oblivious to the animosity rising at the table.

“I’ve got a lot of respect for her,” Tomie continued, “She beat me in the final round of the Shrimp Showdown. If I wasn’t so invested in Matt, I’d be tempted to steal her from you.” They both laughed. I wasn’t laughing.

“You should leave him if you’re unhappy.”

Tomie audibly gasped, “Excuse me? I never said I was unhappy with Matt.”

“You don’t have to say it. You’re always talking about the boring, monotonous crap you do together day-in and day-out. He’s fucking weird. You’ve been with him since high school. Maybe it’s time to move on.”

Vee’s wide eyes jumped back and forth between us. She could tell now that this conversation was taking a turn for dangerous territory. “Uh, guys, maybe we should change the subject?” Her suggestion fell on deaf ears.

“Don’t talk about him like that,” Tomie said as evenly as she could, considering that she was now trembling, “I love him.”

Ignoring her warning, I pushed on, “You always say that you don’t want to marry him!”

“I don’t want to get married, period. For a lot of reasons. It doesn’t mean that I don’t love my boyfriend!”

I rolled my eyes, “What do you know about love, anyway? What makes you so qualified to judge me? You were only with one guy before Matt, and it was his brother!”

Tomie reached for a glass of water that was on the table, clearly intending to throw it in my face. I pushed her too far with that last comment. Mad as I was, I didn’t want things to get physical. I was genuinely surprised Tomie didn’t win that stupid Shrimp Showdown. She was scrappy. She’d definitely kick my ass if push came to shove.

Mercifully, Vee wrestled the glass away before things escalated, “Thomasina! Noel! What the hell has gotten into you two today?!” She used our full names, which she only ever did when things got serious.

I crossed my arms in front of my chest and huffed, “She started it.”

“By saying how much I liked Vee’s girlfriend? Am I supposed to apologize for that?”

“We both know that’s not what this is about!”

“What the hell is this about?” Vee asked with exasperation.

I threw my arms up as I spoke, “She doesn’t like Emile!”

Tomie confirmed without hesitation, “I don’t.”

Vee furrowed her brow, “Why not?”

“Just call it a gut feeling,” was her reply. Her logic was shaky at best. It was obvious she was being unreasonable. “And Noel has awful taste in men.”

“You kind of do,” Vee chuckled. Tomie’s expression was quick to turn smug. Mercifully, her expression soon fell. “I have a good feeling about this one, though!”

I nodded, “Me too!” At least one of my friends was being supportive.

Vee, ever the peacemaker in the group, turned to Tomie. “Emile is innocent until proven guilty. A gut feeling doesn’t mean anything. I think it’d mean a lot to No-No if you’d give her boy the benefit of the doubt. That’s not too much to ask, right?”

She growled something that I hoped had been, “I’ll try.”

“No-No,” she said to me, patting me on the back. It was reassuring—but only for a moment, “Matt’s kinda strange, but don’t pick a fight with Tomie. She’s like a rabid momma squirrel when it comes to protecting her own. That includes you, you know.”

“I know,” I groaned. Tomie’s judgmental tendencies came from a place of love and concern. I only wished she’d support me, just once at least. I wasn’t the same timid little flower I had been in high school. I didn’t always need her looking out for me.

“Great! Well, now that you’re off of each other’s throats, can we please think about food already?”

She was right again. Our poor server had been circling our table for minutes. They must have been either waiting for the drama to die down to take our order, or deciding if it was worth having us kicked out for making a scene. I appreciated that we weren’t ultimately booted from our favorite eatery. I’d make sure that we all tipped very well in compensation, because that was how waitress solidarity worked.

After we’d eaten, Vee steered the conversation back towards Liz. “You missed out on hearing Liz’s amazing prom story.”

“So she grew up in the South, right? Private high school, conservative town,” she shrugged, “You know, not a really friendly place for a proud young lesbian.” I could imagine. Vee was out in high school, too, and even up here people had been very cruel. “She wasn’t allowed to take her girlfriend to prom. There was some dumb old rule that said your date had to be of the opposite sex and under the age of twenty one. They wouldn’t let her petition to change it. So rather than skip out on their stupid overrated dance, she decided to teach them a lesson.” Vee twiddled her fingers in excitement.

“Oh man, this is a good one,” Tomie grinned, “You’ll never believe what she did. I didn’t, until I saw the pictures.”

Vee blurted out, no longer able to resist sharing the best part of the story, “She took one of her dad’s alligators to prom!”

“She did! She said the teacher at the door was so scared that she bolted, and they walked right in with the gator. Can you imagine? The other students scattered like roaches and she slow danced with it right there in the middle of the gym,” her eyes twinkled with mirth, “I wish I was there to see it.”

I was in disbelief. There was no way that this was an actual thing that happened in real life. “And they just let her stay there?”

“Oh. Not really. Once they realized that she’d brought a freaking live alligator as her date, they threw her out. She tried to argue that the gator was a male under the age of 21, but they weren’t hearing it. Sid had videos and everything. You know, from when they called the police on her.”

This was the craziest thing I’d ever heard.

As if sensing my disbelief, Vee was prepared to provide evidence. “I swear this actually happened. It got a lot of media attention, apparently. She was offered a scholarship and everything afterwards. Here, I had her send me the best photos.” She passed me her phone. Liz was in a lovely green sequined dress with her long blonde hair perfectly styled in a curly updo. She was pressing a gentle kiss to the snout of an alligator that had its jaws bound with black electrical tape. I swiped to the side to find a second photo. A burly pair of arms suspended the alligator in the air. Liz stood behind the beast with her tanned arms wrapped around it in a perfect mockery of the classic prom pose.

“Her dad helped out with that one,” she explained.

There was one last photo, an artistic close up of Liz’s dainty hand holding the alligator’s clawed foot. You could see the flowers of the corsage worn around her wrist just barely poking into frame.

I was laughing so hard that there were tears in my eyes. “Wow, I don’t even know what to say,” I handed Vee back her phone, “I guess you have finally found your perfect woman. Congrats.”

Vee was practically glowing with pride. I really was happy for her.

Tomie chuckled after she took a sip of her water, the same one she’d nearly thrown at me not too long ago. “There’s someone for everyone.” 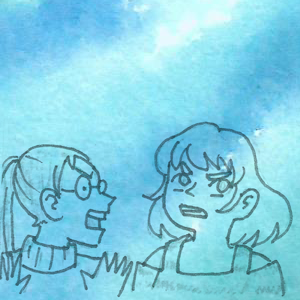