After that night, we started officially dating. My heart soared at finally being able to call Emile my boyfriend. And even better, he wanted us to be in a mutually exclusive relationship. I knew he hadn’t been a player. For once, everything was going exactly as I’d hoped it would. And while he’d been pretty liberal with nicknames for me from the get-go, always calling me ‘Elle’ and now also ‘Kitten,’ it took this milestone for me to feel comfortable using his preferred nickname. I’ll never forget how his eyes lit up the first time I called him ‘Em.’

We spent time together whenever we could. He’d still visit me at work sometimes. I did notice that he came in less frequently once we’d started dating. Perhaps Rose had been right all along, and it really was me he had been coming there to see. We spent our evenings at whoever’s apartment happened to be the most convenient on any given day. Eventually, he began to pick me up and drop me off at work with enough consistency that I questioned whether or not I should renew my monthly bus pass.

Before long, we’d each purchased a toothbrush to keep at the other’s place. I was really touched when he’d offered me an empty drawer to keep some clothes in. It’d save me the trouble of always packing a full overnight bag. I ended up also bringing along some throw pillows and one of my favorite blankets to liven up his living space. I started keeping shampoo and other toiletries in his bathroom, and used them frequently enough that he began to replace them when he noticed them running low. It warmed my heart, even if he didn’t always buy the right brands. It was the thought that counted, after all. I was definitely in danger of falling in love with this sweet, thoughtful man.

I cursed myself one morning, when I accidentally spoiled our rare chance to sleep in lazily together. I hadn’t turned off my alarm from the day before, and my damned clock radio blared to life at 7 AM. I groaned to myself over my error. He always looked so exhausted, and we almost never got to relax in the mornings. Before I could feel too bad about disturbing his rest, Emile stretched over me to slap blindly at the alarm in an attempt to shut it off. We were both wide awake when we heard the sound of cracking plastic over the radio buzzing.

I sat up abruptly, realizing what had happened as I reached past him, “My glasses,” I explained. He must have crushed them. I’d carelessly left them on top of my alarm clock last night.

“It’s not your fault,” I soothed as I inspected the damage. The frames were cracked in more than one place. There was no way they could be repaired. “I should have put them in a case. They were really old anyway, don’t feel bad about it.”

“How bad is your vision?”

“Not great. And I donated all my old spare pairs before I moved.”

A quick phone call later, and I had scheduled an appointment with my Optometrist for the following day. Thankfully they’d had a cancellation and were able to squeeze me in on short notice. Emile offered to take off from work, both to drive me to my appointment and to pay for a replacement pair of glasses. He obviously felt really bad about what had happened.

The next day, Em helped me look at frames while we waited to be called back for my appointment. There were walls and walls of them to choose from, and I was indecisive as ever. It was like picking out a whole new face for myself. With his help, I settled on black ones that looked a lot like my old pair. The shape was similar, but these ones had silver sparkles on the temples. I was dismayed when I was told it’d take a week for them to be ready to pick up.

“A whole week? Can you expedite them?” I asked, knowing that I wouldn’t be able to work without them. I’d already had to call out yesterday, and I had a shift scheduled for later today.

The optician grimaced, “We might be able to shave off a day or two, but we can’t make any guarantees.”

“We do stock some here. You can ask the doctor about them.”

It was a good idea. I’d worn them briefly in middle school, before fully embracing glasses for their convenience. I’d be willing to give them another chance if it meant I could see now instead of several days from now.

After my exam, the doctor explained that I could get by with some of the basic contact lenses they had in stock until my glasses came in. I tried them on, and they weren’t as uncomfortable as I’d remembered them being. I had to prove that I could take them in and out on my own before we could leave. Unfortunately they only came in a 6-month supply, but Em had offered to pay and didn’t seem bothered about that. He paid for everything: the glasses, the exam, and the contacts, without complaint.

I tried to thank him once we got back to his car, but he wouldn’t hear anything of it.

“It’s nothing to me. Besides, you wouldn’t have needed them at all if I weren’t such a brute.”

“Sure, but it wasn’t your fault that I was two years overdue for an exam. You didn’t have to pay for that, too.”

“You’re worth every penny, Kitten,” he grinned as he leaned closer, drawing me towards him. “And now that your pretty face isn’t hidden behind those specs, kissing you will be easier.” He pecked a few light kisses over my cheeks and nose to prove his point. He kissed my lips next, soft and lingering.

“You’re such a dork,” I giggled as I pushed him away. ‘And I love you,’ my heart sang silently. Maybe he had a point—cuddling was definitely easier without my glasses in the way.

Believe it or not, this was a scene from the original concept I'd had for No Elle that I'd originally come up with in middle school. So enjoy the gratuitous Optometry chapter, which is fitting because I now work at an eye doctor's office! 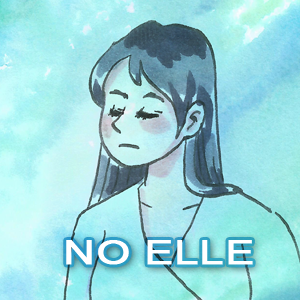