I sat behind the wheel, parked in front of my apartment. I numbly gazed down at the photographs I’d unintentionally stolen. I don’t know how I’d missed it upon first glance. It was so obvious now that I was looking at her. Looking at Elle.

We had the same black hair, but hers fell in soft waves. Our face shapes were the same. Our eyes were the exact same shade of green, but hers had a slightly sharper look to them. I couldn’t tell if that was an illusion caused by her winged eyeliner or not. Our complexions were similarly pale, but her face was aglow with a smattering of freckles. Based on where she stood in comparison to Emile in the last photo, we were likely very similar in height. We could practically be twins.

That wasn’t even the worst part. I’d noticed upon closer inspection that she was wearing a necklace in the photos. Not just any necklace, but a familiar one. An opal necklace. My necklace. The same one I was wearing now, that I’d worn every day since my birthday. It hung heavily against my throat, as if the weight of it was trying to strangle me. I tugged at it until the chain gave way and broke off. I let it fall to the floor of my car as if it were garbage. Once I could walk again, I trudged inside. I had to call Karen. There was only one thing I needed to ask her.

“Who’s Elle?” I asked gravely once she’d picked up her phone.

She told me everything. About how Elle had been her best friend in college. How they’d met Emile when he’d stupidly taken a painting course as a general education elective, and how they bonded in class. It was a story I’d actually heard once before without knowing it—it was the exact story Em had told the Smith family when we’d stayed at the couples resort. One of the ones I’d assumed was a bad lie. She told me about how they fell in love with each other, and how he took her bowling for their first date.

She told me that she was there the day he asked Elle to marry him, and about their long engagement. About how she died suddenly in a terrible accident, and how devastated everyone that loved her was to lose her. About how inconsolable and withdrawn Emile had grown after her death, and how he’d ended up being fired from his last job over it. About how she helped him get a new job with her at The Tower.

She told me about how happy she was when Em had informed her that he was dating again, for the first time since Elle’s passing. And she also told me about how unsettled and shocked she was by my appearance on the night she met me at the gallery. She’d immediately recognized my resemblance to Elle. Anyone who’d known her would have caught it right away.

Karen had no idea that I’d known nothing about Elle before today. After all, she was such an important part of Emile’s life. Pictures of her were all over his house. How could he have hidden it from me? How could I not have known? I thanked her for filling me in and disconnected the call.

The more I thought about it, the worse things got. The resemblance. The nicknames. The necklace. Our first date. What else was I missing? Oh god, had he broken my glasses on purpose? Elle wasn’t wearing any glasses in any of the pictures I saw. What about the ‘Elle Mix’ in his car? Who was that for? Every happy memory together was suddenly suspect. Had he really rented a fucking apartment to keep me out of his house, so that I wouldn’t find out the truth? How deep did this go?

I needed some comfort. I needed a friend. I texted Vee and begged her to come right over, that it was an emergency. I couldn’t tell Tomie, she’d lose her fucking mind if she ever found out the truth. Thankfully, Vee messaged me back and said she’d be right over.

She crawled over to hug me when she’d arrived and found me crying on my bed. “Oh, No-No! What’s wrong?”

I handed her the broken frame without saying anything. The pictures would speak for themselves. Or so I thought.

“Is that Emile? Aw, look how young he looks! He’s practically a baby.”

She took a second glance at the photos, squinting in concentration. “She’s pretty?”

“Oh. Well then, nothing to be jealous over.”

“No!” I shouted in frustration. She was so dense that it made me want to rip my hair out sometimes. “You’re not getting it. The nicknames. The jewelry. He was trying to change me into a different person! To make me more like her! I’m sure of it.”

“Hey, girl, calm down,” she soothed, “Lots of people try to change their partner in a relationship. Heck, remember when you were dating Fantasy Football Craig? And you made him give up fantasy football? That was like his whole life, dude. That was pretty messed up, too. This isn’t all that much worse than that, really.”

“I think this is exponentially worse than that!” I shouted as I crushed a pillow to vent some stress. Wasn’t my best friend supposed to be a little more sympathetic? She clearly wasn’t understanding the situation. I proceeded to explain every detail that I knew so far. I told her of all of my suspicions, including the ones I’d not confirmed yet.

“OK, I get it. That’s pretty bad,” she finally agreed as she scratched her head. “But don’t you feel bad for him, too?”

“I mean, I’ve been with Liz for less than a year, and I’d be absolutely devastated if anything happened to her. I can’t imagine what I’d do if she died.”

“No! But like, he’s got to be super messed up. He definitely needs help. And now, what, you’re going to leave him too?”

“Of course I’m going to leave him,” I replied with exasperation, “The basis of our entire relationship was a lie!”

“But you knew that already,” she said, “You lied to him, too. Back in the beginning, you lied to him about needing a ride to work and he came through for you. So it was OK for you to lie, but not him?”

“The scale of things is a little different here, Vee,” I shot back defensively.

“Maybe,” she admitted, “All I know is that a couple of days ago you were telling him that you loved him, and now, when he probably needs you the most, you’re ready to walk away. That’s pretty cold.”

“A-and what would you suggest I do instead?”

“Talk to him. Try to help him, maybe. At least see what he has to say for himself.”

She pulled me into a fierce hug and my tears started to roll down anew. I didn’t agree with what she was saying, but I could see her point. I had to talk to Emile.

Did anyone guess it? There have been hints that something odd was going in when it came to Noel and Emile's relationship.

Vee may seem a little cold to her friend in this chapter, but it's her way of giving her bestie some tough love. Do you think any of her points are valid?

The two paintings in Emile's house described in chapter 17 are the ones they'd made together in the painting class where they met. Elle's is the big lovely one, and Em's is the smaller, crappier one. Isn't that sweet? It seemed like just the thing a young couple in love would memorialize in their first home together.

And speaking of décor, do you remember waaaay back when I described Emile's apartment for the first time? It wasn't barren because he was lacking in interior design skills, It was empty because he didn't actually live there. And Noel noted that the sheets were scratchy--this is because they were new. Well, they say hindsight it 20/20. (Get it? An Optometry joke? I work for an eye doctor's office. Haha. I crack myself up.) 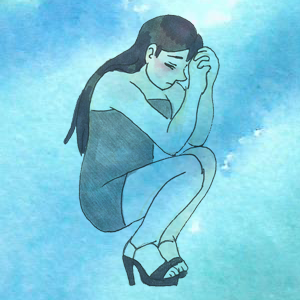