I needed some time to cool off before I made any rash decisions. I knew that I wouldn’t be so upset if I hadn’t cared so deeply for Em, and those feelings didn’t just vanish overnight. Emile had been considerate enough at least to give me space while I needed it. He had made no attempts to contact me, and I didn’t see him at work for a few days. When I finally sent him a text asking if he wanted to talk, his response was enthusiastic and immediate.

I agreed to meet him at The Webb. I wasn’t scheduled to work, but I figured it was as safe and neutral a spot as anything else I could think of in my current state. If things went south, I knew Di would kick him out without hesitation. Em was already seated by the time I arrived. Apparently he’d been there for a while, according to Rose.

“I’m sorry,” he said as soon as I sat down across from him. He looked it. He had deep circles under his eyes, and I’d never seen him looking so shabby.

I crossed my arms over my chest, as if they could protect me from whatever was about to happen. “First things first, I want you to tell me everything.”

“Karen said she already told you.”

“That doesn’t mean I don’t want to hear it from you.”

“Alright,” he took a deep breath, “I met Elle in college, in an art class I had no business being in. She was the most radiant creature I’d ever seen. I loved her immediately. I didn’t feel worthy to breathe the same air as her.” There were tears in his eyes already. “When I worked up the courage to ask her out, I didn’t expect her to be interested. When she agreed to marry me, I felt like the luckiest guy in the world. We had a long engagement. We traveled to visit her family in France. We’d finally set a date, when—” he paused, struggling to continue.

“She was jogging. She wanted to lose weight, to look good for the wedding. I told her she didn’t need to, that she was perfect, but she insisted.” He was crying now, and hid his face behind one of his large hands. “The driver was distracted. Texting. She didn’t stand a chance. They couldn’t save her.” He choked out between sobs, “She was gone before they made it to the hospital.”

I scooted over to his side of the booth so I could soothe him. He was practically hysterical at this point. I rubbed gentle circles into his back and he took a few minutes to compose himself before he continued.

“I didn’t think I could live without her. I wanted to die. I was waiting to die,” he confessed. “But just when I thought I couldn’t take it anymore, everything changed.”

“I saw you,” he explained, “Looking so much like her. You were waiting at the bus stop. I knew that you were the closest thing to happiness I’d ever find again.”

He confessed to everything. The things I was already sure of, like the nickname, the necklace, and renting an apartment to hide the truth from me. And things I was suspicious of, like him breaking my glasses on purpose and the ‘Elle Mix’ CD being for her. There were more things, little things I hadn’t thought of. Like how he’d been purchasing her favorite brands of soaps and shampoos for me to use at his apartment. He’d done it all on purpose.

I was furious. I was heartbroken. I wanted to punch him, to kick him, to cry. I wanted to hate him, but I couldn’t. Perhaps that was most infuriating of all.

“I forgive you,” I found myself saying.

He looked as surprised as I did. “What?”

He was quiet and did not reply.

“You’re sick,” I told him as I laid my hand over his on the table, “And I know you need help, professional help. I want to be there for you. I think we can still be together once you move past this.”

He yanked his hand away as if my touch had burned him. “I don’t want to move past this.”

He growled, “You think I can just forget her? Move on? That’s impossible. That’s not what I want.”

“What about what I want?” I asked despite dreading the answer, “Don’t you care for me at all?”

“Of course I do,” he said as he traced my jaw delicately, “How could I not? You look so much like her.”

Nothing hurt quite so much as hearing the man I loved basically tell me that I was his second choice. It was worse than that, even. I was just a replacement being used to live out some sick fantasy where he could pretend that Elle wasn’t really gone. All the love that I’d thought he’d felt for me, it was all just scraps of what he’d felt for her.

“I thought it was real,” I sniffed. It was my turn to cry now. “What we had between us.”

He drew me closer, but I felt no comfort in his embrace. It only got worse as he spoke, “It was real enough. We were both playing roles. You wanted me to be the older man who had his life together, and so I was. And I wanted you to be Elle. We can still pretend. It can be even better, now that you know.”

I looked up at him. His gaze was soft and inviting. I realized then that this was why he’d allowed me to find out, this had been his goal all along: so that I could play my role better. Not because I deserved to know the truth. Not because he was tired of lying and hiding things. Not because he wanted help. He wanted to continue this mockery of a relationship.

I pushed myself away, stood up from the table, and left without looking back.

“Sorry I’m late!” I called as I popped out from behind a door marked ‘Employees Only.’ I weaved past Di towards the dining room. “I got a flat tire this time. Must be all those damn potholes.”

“Don’t sweat it,” he replied from his seat. “They really need to do something about those roads. Rose has been covering for you. You’ve just got the one booth waiting.”

I smoothed out my uniform and set off to work. I stepped up to the table by the window and greeted, “What can I get for you today, sir?”

And it's over. Or is it? Tune in tomorrow for the epilogue. 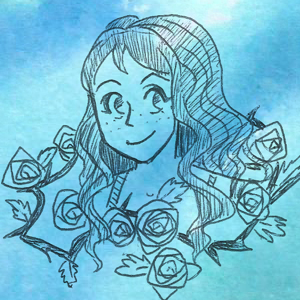