I tried to forget Emile. I made every effort. I was incredibly lonely once the dust settled, so I started dating again right away. I even joined the same site Vee had used to find Liz. I went on a few mediocre dates with a few mediocre men. Most were disappointing. The ones that weren’t immediately awful lasted a few dates, maybe even lasted a few hookups. None of them were very satisfying. I ended up deleting my profile before long.

At my lowest point, I started to go out with Liz’s friend Sid. We’d actually had a lot in common, and he wasn’t exactly over his ex either. We never really clicked, but I felt like we were very nearly kindred spirits. I thought we could at least be friends with benefits, if nothing else. But when things started to get hot and heavy and he apologetically left my apartment in fucking tears, I knew that plan would never work out.

The next day at work, when Emile showed up as usual...I had a moment of weakness. I brought him home with me. At first, I told myself it would be a one-time thing, and that I wouldn’t let it happen again. But I allowed it to keep happening.

I told myself I could handle him. Now that I knew what to look out for, I could be the one in control. I set some firm ground rules. He could only come over to my place when invited. I wouldn’t be his girlfriend. He was forbidden to call me ‘Elle.’ I allowed him to keep calling me ‘Kitten,’ which I strongly suspected was also a shared nickname, but I liked it well enough to let it pass. I figured this time, it could be me using him to sate my own loneliness. Surely nothing was wrong about that? He didn’t seem to mind.

But as we fell into a routine, we started to get too comfortable. I got sloppy. Careless. Too inconsistent with birth control. I dreaded breaking the news to him when I first realized I was pregnant. We weren’t even dating. None of my friends even knew that I’d been seeing him again. But when I did finally tell Em, he said he’d support me in whatever I wanted to do. I decided I wanted to keep the baby. I was pleasantly surprised by how excited he was over the idea. As it turns out, we’d both dreamed of having a family some day. This certainly wasn’t how I envisioned it happening, but life was funny like that sometimes.

Vee had been right—there was no reason for me to be jealous of a dead woman. I was alive, and I had so much more to offer. Now that I was carrying our baby, Em treated me like I was made of gold. He did whatever I asked, and he fawned all over my every need. I wasn’t even showing yet! He’d already started cutting back on cigarettes. He was working towards quitting all together. I hadn’t even needed to ask him to do it, he’d decided on his own that it was the right thing to do. I knew that, despite our troubles, he would be a great father. He’d love this kid more than anything else in the whole world.

I was surprised when he’d offered for me to move into his spare bedroom. It made sense; babies are expensive, and I’d be much better off financially if I weren’t paying rent. If we lived together, we’d both be around to take care of the baby. At first I made excuses. Eventually, I told him that I wouldn’t raise my child as a guest in a house that was practically a shrine to a dead woman. He was irritated but eventually relented, and offered to move Elle’s things into storage. I was shocked. I agreed to move in with him, but would do so only when my lease ran out.

We spent all afternoon perusing jewelry stores. We were looking at engagement rings, and it was harder than I’d expected to pick something suitable. My glasses slid down my nose as I leaned over the latest glass display case. I frowned when I didn’t see anything I liked. I had a picture of Elle’s ring saved in my phone, and I automatically shot down anything that looked too similar. We didn’t settle on anything today, but we’d have to find something before next weekend. I was taking Em home to meet my parents. We were going to tell them that we were engaged, and I guess in a way we were. We had agreed to get married before the baby came, more for the sake of convenience than for anything else. It was a mutual decision.

That night, spooning in my bed, I drew Em’s hands to rest over my stomach. It was still flat, but wouldn’t be for much longer.

“I know you’re not supposed to ask questions that you don’t want to hear the answer to,” I sighed, “But if you could trade us, me and the baby, to have Elle back, would you do it?”

He was silent as he pondered. “That is an incredibly cruel question to ask someone,” he said eventually.

“I know.” He probably already tortured himself over this daily. That didn’t mean I couldn’t torture him, too.

“It’s impossible. It’s not a feasible situation that I’d ever have to worry about facing. I’m not going to agonize over a hypothetical question.”

I rolled over, satisfied with his answer, and turned out the light.

And that's all, folks.

While the ending is...bleak, and their relationship is certainly MASSIVELY unhealthy, I do believe that Noel and Emile will be happy together.

Thank you for reading. 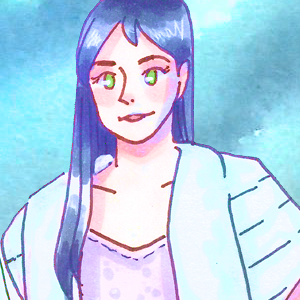