"Frozen Milk, how do you feel?" Prota held his hand over Frozen Milk's forehead. The cool sensation his hand left behind made Frozen Milk crave for more contact.

"Are you sure?" Prota looked worried, "you exhausted yourself too much yesterday. Even if it was amazing how you got rid of the harasser you shouldn't' strain yourself so much!"

Prota's eyes sparkled with respect and admiration for Frozen Milk.

Frozen Milk wished he could bury himself deeper into the blanket as he couldn't stand the pedestal Prota put him on. On one hand, Frozen Milk was touched by Prota actually worrying about him but on the other hand what the hell was that about straining himself?

All he did was to release an onslaught of gibberish at Glimpse Water and that pathetic excuse of an author just fainted like this!

What did he create? Definitely not a weak, wimpy character like Glimpse Water! All his characters were badass and OP! Even Glimpse Water this evil antagonist, so how the hell did he turn into a pathetic blob on the ground?

However, Frozen Milk was even more ashamed of himself. He suddenly got a fever right after, supposedly, defeating evil harasser Glimpse Water and his protagonist admired him even more!

Frozen Milk was actually really happy Prota cared for someone like him and he was even more in ecstasy thinking he wouldn't have to go to work!

Since he transmigrated, it had been one hurdle after another, stress piled up on even more stress and he didn't have time to properly rest. Especially after coming to the water capital where he had to work until he could barely walk or puke.

Now the immoral thoughts of illegally making money entered his mind. They've been stuck here in the water capital for three months now, occasionally buying weapons and armour but they made no sign of progress.

The only thing that was properly progressing was Frozen Milk's relationship with his protagonist. But this wasn't the time to play family! He had to help his protagonist to gain his team and had to definitely keep an eye on Glimpse Water who was clearly up to no good. He had to stop his author from trying to kill his protagonist, now that Glimpse Water knew of Prota's identity.

"Don't worry about me," Frozen Milk finally spat out.

"You should go to work," Frozen Milk was exhausted and couldn't afford to spend his energy arguing with Prota.

Prota patted Frozen Milk's head and said sincerely: "Frozen Milk if anything were to happen to you, I could never forgive myself!"

Splat. Frozen Milk almost coughed blood. He was so touched by his protagonist!

"Nothing will happen to me. Like I said, don't worry and go to work."

After a while, Prota finally nodded his head and with puppy eyes looked at Frozen Milk:

"Ok, but be careful! Wait for me! If there's anything, I'll sense it and come running

Frozen Milk sighed as he watched Prota leave. How did his protagonist turn into such an obedient character? Frozen Milk questioned his own superior abilities that could change the book's plot. A disgusting smile appeared on his face. Naturally, he was born talented!

In these months, Frozen Milk was able to slowly but steadily shed his image as a scum and became more human. He could feel compassion and care for others. Frozen Milk was surprised at himself.

He closed his eyes to rest when suddenly his system rang relentlessly in his head.

"Ffs what?" Frozen Milk cursed again. "Can't you for once leave me tf alone?"

Where did his new reputation go? It grew a pair of legs and ran down the gutter.

"Oh ok, I see," Frozen Milk closed his eyes before he ripped them open again.

"AGAIN? Didn't I tell you to fckn coexi- Wait," Frozen Milk's headache viciously pounded against his forehead. He sat up but felt too weak to do anything.

"Damn! Why didn't you say so earlier?" despite his body being pudding, Frozen Milk immediately changed himself and ran out. He apologised in his mind to Prota but he had no other choice.

"Host, new mission. Stop the host of the other inferior system from harming the protagonist."

Frozen Milk stood still in his tracks. He knew it! Glimpse Water would try to attack the protagonist. However, Frozen Milk didn't calculate it'd be this early. Was it because his presence changed everything?

"System, please give me direction."

The system paused and then arrows appeared in Frozen Milk's field of vision.

"If you had a function like this, why couldn't you've pooped it out earlier?" that sneaky system hid something like this from him.

"Because host still didn't unlock the feature. System made an exception. This feature should be available at level 20 only."

"Fuck! Off!" a furious storm was trapped in Frozen Milk's mind.

Oh, how he wished he could pull his system into it! After almost two years stranding into this world, accomplishing countless missions, he was still at 0? What were the guidelines? What?

"Tell me why? How can I fucking get out of hole 0? Didn't I do everything right? So, tell me how in the world can I level up? It's impossible, isn't it? You're just continuing making fun of me, aren't you?"

Frozen Milk was ready to flip any table, "Screw you! Don't act OOC all of a sudden! That's truly impossible! Illogical! Impure! Illegal! Incredibly rotten! I… I…! I don't know!"

Frozen Milk couldn't bother with his system anymore. He chose to ignore it and gave it the cold shoulder. Who had time to bother with a petty AI? Not him!

Frozen Milk was out of breath. He was still sick and running after Glimpse Water made him feel even worse. He had to rest at a street corner.

The random waterfalls helped him to refresh himself and quench his thirst after exercising so much.

In front of him at a small stall, Frozen Milk saw Glimpse Water. He felt the incredible urge to jump at him and it was hard for passer-by not to think he was a suspicious stalker or maybe a secret admirer of the handsome guy that Glimpse Water turned into.

The passer-by distorted their faces in disdain as they saw how Frozen Milk obviously obsessed with Glimpse Water was like a slimy ball of snot that just couldn't disappear from a nostril no matter how hard it was poked and peeled off with a finger.

So, like this Frozen Milk followed Glimpse Water from store to store to even his house, yet nothing happened. He was shocked, he couldn't tell what Glimpse Water had planned.

As Frozen Milk laid in his bed again, Prota came barging in and immediately rushed to his side.

"How are you feeling?" Prota felt his head, "What did you do? You're burning up even more!"

Frozen Milk didn't have the heart to tell he actually went outside stalking his future enemy, so he kept quiet.

Prota covered Frozen Milk's head with a wet cloth and sat beside him while holding his hand. Frozen Milk felt a bit uncomfortable. Wasn't this situation too weird?

"I'm really fine. You don't have to be here," he tried hard to get Prota to let go of him but it proved to be futile.

So, Frozen Milk had to endure this intimacy until Prota fell asleep. He sighed as he moved on the bed to let Prota sleep with him. He pulled the blanket over Prota and hoped Prota could get enough rest for work tomorrow.

Frozen Milk really developed a soft spot for this character.

Okay this system is a little shit and I’m living for it. 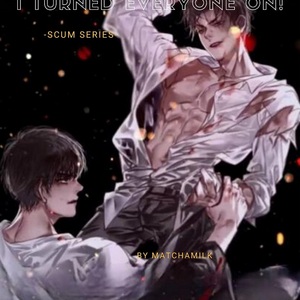