It’s definitely not a term Aphelios is used to being called. The Boss’s pet, his jewel, his novelty, his plaything. Those terms echo against the gold pillars and gold tiles from the mouths of the servants and maids, casting looks at him, sliding away with suspicion. Sheila is the only one talking to him, or perhaps the only one that is allowed to, and her presence is calming amidst the chaos. Her long dark hair swishes behind her now as she walks, reciting aloud the list of things she needs to do.

“Find you some jewelry, first and foremost, dress you properly, give you something to eat, pierce your ears, then we can let you accompany Master to the Pits to watch today’s meetings…”

Jewelry? Piercing ears? Meetings? The words swirl around his head.

“Honestly, I don’t know what you were thinking. You should’ve just left when you had the chance. I don’t know the circumstances in how you got here, but either way, you should’ve clutched at the opportunity…” She shakes her head. “And you never talk. I haven’t even heard you talk to Sett, though who has the chance to, he talks so much on his own…”

Aphelios wonders what caused Sheila to dislike him so much. At one point though, Aphelios hated him too, enough to cross the Ionian desert to kill him, and yet here he is, wanting nothing more than the Boss’s attention. Of course, Sett hasn’t hurt him personally. If Sett actually fought back instead of the sex, Aphelios’s feelings would probably be much different now. Sheila glances back at him and sighs.

“And you still don’t answer! Is this the Freljordian cold shoulder?”

Aphelios shakes his head and taps his lips, and signs to her briefly - “I can’t speak.”

Sheila furrows her eyebrows. “Are you deaf?”

Aphelios shakes his head and taps his lips again.

He shakes his head again.

No. He gives her a pained look.

Yes! He nods quickly. Sheila looks surprised, stopping and turning to him fully.

“For real? Ah, I’d ask you why, but that’s pretty complicated to understand from facial expressions. I wish I could sign.” She looks down at her hands, curling them and uncurling them. “What an odd scenario.”

She leads him to an ornate dressing room, setting him down in a chair before several mirrors. A large closet reveals layers and layers of brilliantly colored clothing of hundreds of different materials - silk and velvet and cotton and wool - of all different styles and shapes. It looks more like a collection of female clothing than male clothing, however.

“Master wants you to be dressed more femininely,” Sheila explains, catching Aphelios’s confused look. “You have a pretty girly figure, so it makes sense he’d want to show that off. He requested something particularly more revealing, so let’s see…”

She sorts through the hangers of clothing, murmuring to herself, and occasionally pulling one out, putting it against Aphelios, and then shaking her head and returning it to the closet. Eventually she seems to settle on one - a gauzy top embroidered in gold, the netting of the shirt revealing his chest and stomach beneath. Revealing is right! The shirt is more like a shawl, wrapping around his shoulders and coming together at his breast bone, teasing an occasional glance at the pink of his nipples when he moves. A purple sash is tied around his waist, the gauzy material dropping to his knees. He flushes as Sheila brings several necklaces up to compare, mostly thinner numbers with delicate chains, before deciding on a silver necklace that ends in a violet amethyst pendant, emphasizing the purple mark on his lip and under his right eye. Another maid enters the room, bringing a stainless steel bowl filled with ice before bowing the leaving.

“Sett had my ears pierced to,” Sheila says as she presses an ice cube against Aphelios’s earlobe, the cold water dripping down his neck and making him shiver. “He loves how it looks. It pinches, but it’s not bad at all.”

The pain is quick. A jab of the needle in Sheila’s hand pierces the soft skin of his ear, going through, cutting to the other side. It’s hot. His ear feels unbearably hot, despite the ice. It must be melting just by touching him. Something cold goes into the wound, it must be the earring, it’s cold, then warm, and then growing indistinguishable.

It’s harder for the second one. He expects the pain, and thus it hurts even more. It’s more than a prick, more of a pierce. He gasps, and then the pain subsides to an ache. Sheila’s fingers are red as she stands up.

“He was right. Silver IS your color.”

He picked it for me?

“He likes showing off what is his,” Sheila says, wiping off her fingers with a cloth and then wiping his earlobes. “And showing off how much money he has from his work. He doesn’t spoil just anyone, either. I was surprised by the lengths he wanted me to adorn you. “

Spoiling me. Adorning me. The silver charms dangling from his ears wink like fallen stars in his reflection in the mirror. Only Alune talked to him in a sweet manner, telling him he was handsome and good at what he did. No one got him gifts, dressed him up, spoiled him.

(No one fucked him with such passion either.)

“Now we’ll get you something to eat, and then you can see him.” Sheila’s smile is knowing. “I know you want to. It feels good to be someone’s soft spot, after all.”

He eats ham and eggs for breakfast, and he realizes why Alune’s presence is so faint now, more than ever before. He hasn’t drank the poison. He hasn’t reignited their connection. What would she say if she knew what was happening? Would she be disgusted? Worried? Frantic? She was normally a calm front, but such a scenario would reveal a whole different side to her that he’s never seen. Well, maybe it’s okay for just a bit longer to play pet. He always wanted to get his ears pierced, after all.

“It’s strange to be near someone so quiet,” Sheila murmurs, breaking his trance. She sits beside him at Sett’s large dining table, resting her chin in her hands. Her caramel skin looks golden under the chandelier lights. “It feels like I have too much time to think.”

He smiles at her, pushing his plate away from himself to signal that he’s finished eating. I want to see him already. I don’t want to wait any longer. I want him to look at me with the same passion he did last night. I want to know that he feels the same breathless feeling that I do. I want to know. I NEED to know.

Sheila nods to his plate, and another maid appears to collect the dishes, moving quietly out of the way.

“Normally I’d be the one doing the dishes and cleaning up,” Sheila says, pushing open the dining room door. “But I have a special job today taking care of you.”

Aphelios laughs at this. Taking care of him? Maybe he really is a dog like Sett compared him to earlier.

Sheila looks surprised at hearing his laughter. “So you CAN make noise!” She blushes slightly at her exclamation. “Ah, I’m sorry. I’m just excited. Maybe I’m already getting stir-crazy with the quiet.”

Aphelios shrugs, smiling at her. A lot has been going on, that’s for sure. But her presence has been calming, ever since she came into Sett’s bedroom with a robe for him to wear. He wants to ask her questions, get to know her, understand her better. Maybe it’s because her obedient nature reminds him of his sister’s…

“So, you’ve never been to the Pits, right?” Once again, her voice chases away Aphelios’s train of thought, but he’s used to it by now. He shakes his head in answer to her question.

“Sett started in the Pits himself,” Sheila explains, playing with her hair as they walk. “He was a fighter like the rest. But he won. And he kept winning, and kept getting stronger. He didn’t want people making money off of him. He wanted to make the money for himself. He calls himself an entrepreneur,” she laughs, “But everyone else just calls him a thug.”

“I came a year ago,” Sheila continues. “Not as a fighter, thankfully, just as a maid. Master has a thing for dark hair, so I caught his eye in the market where the slave holder was selling me. Don’t get me wrong, he’s a violent guy. But, he has another side to him too. He’s tired of being weak. He’s tired of being stepped on.” Sheila looks at Aphelios now with a somber look in her eyes. “And that’s why I’m still here. Because there’s moments where this brutal pugilist treated me better than anyone else has my entire life. And I have a feeling that’s why you’re here too, why I found you in the bedroom when the Master expected you to have left. It’s why any of us who work under him stay here - because he shows us decency and respect when we absolutely need it most.”

At first, it doesn’t fit with Aphelios’s experiences. He was raped. His virginity was taken from him. He was tied to a bed, called slurs, violated in places he didn’t know could be violated. But, then he remembers. Late into the night, Sett’s rough voice became softer, huskier.

Cleaning him, wiping the sweat off of his forehead. Cutting the ropes. Giving him water to drink. Sett’s arms fit around him, closing him in. His body was hot - the guy was practically a fireplace on his own - but it felt safe, and it felt familiar in some way. And when he looked at Sett’s scarred face he saw what could only be fear.

“Please don’t leave me too.”

“I don’t know anything about the Master’s past,” Sheila is saying. “He talks about his mother often, but not his father. And nobody wants to ask.” She stops, dropping the strand of hair she’d been toying with. Her expression is one Aphelios can’t decipher. “You’re going to see a cruel sight in the Pits,” she says, “But I don’t think it’s because he’s bad. He talks about the money, but I think he’s just doing what was done to him.” She looks at Aphelios, her expression hardening into resolve. “I think violence is all he knows. It’s the only world he’s been living in. I think you can change him. I think you can show him a different world.”

She takes him by the shoulders. “I think you stayed because you think you can help him too. So no matter what, don’t give up on him, Aphelios.” 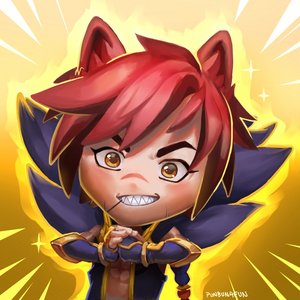 Aphelios has made his decision on what he wants to be to Sett, and while getting ready, he finds out some interesting information regarding his new Master. 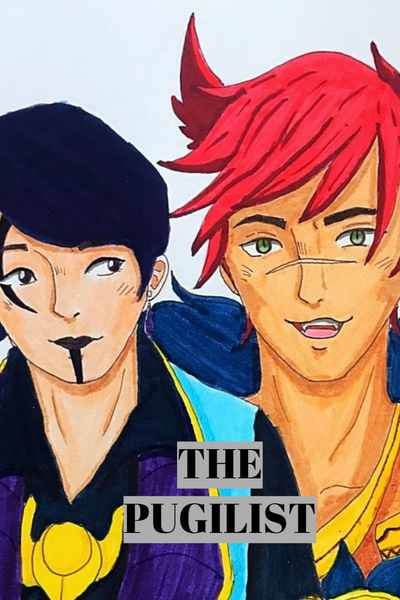 The mute assassin Aphelios finds himself in a strange predicament when his attempt to kill the Boss Sett fails.
Subscribe