The life behind Ada dulled and diminished, leaving only the thud of her boots as the path began its incline. She hadn't climbed Cresthill in years and, soaring above the town, it remained the place for lofty fantasies and forgotten dreamers.

At a younger age, Ada had adored the grassy banks of the hillock, running up and down and up again until the sky was stained indigo and her father came to call her home. She would spend hours at a time on the hill's peak, tracing the maze of houses that mapped the town below. Then, if she was feeling brave, Ada would watch the wystwood trees that seeped out to touch the horizon, a sea of twisting branches and shivering leaves.

But tonight the hill was silent, and Ada yearned for its solitude as she climbed higher, up and up, until she found a small arrangement of stones within a muddy alcove. The moonlight couldn't quite reach the Wishing Well's hollow, and shadows clung to the ivy that weaved between the stone-divots. Bluebells clustered around its base, for they were only ever absent after a winter's snow.

Ada moved closer, stroking a hand around the lip of the well, its stones worn with age but strong in structure. A whisper of bells swirled through the alcove on a spring breeze, and Ada thought that perhaps the celebrations had started in the town centre.

A melancholic tune spun across the hillside and Ada turned, almost expecting to spy the singers gliding across the slivers of pavement below. But she could only see the pale grass swaying under the starlight, as the town was lost on the other side of the hill.

The night was still warm, though Ada found that the breeze bit at her skin no matter how closely she drew her cloak. As she buried her hands in its pockets, her fingers found crumbs of rock cake, and she grimaced when a raisin made a home for itself beneath her fingernail.

Something in her right pocket swayed as she shook the currant free, and Ada dug her hand in deeper to find a round object tucked between velvet lining and folded paper. Her grandmother's golden coin nestled into her palm as she pulled it out, smooth as a star fallen from the heavens.

Ada thought of her grandmother, so many years ago, who had travelled to this very spot to make a wish. A wish that was so important she had forgone the most precious object she owned. Here she is and there she was; two bodies, two hearts, two minds.

With a tip of her hand, the golden coin spun out from between Ada's fingers before she could think too closely about what she was doing. It clattered down the Wishing Well, falling deeper and deeper until Ada was sure it could not feasibly fall any further. There came a faint patter, but then the sound was lost.

Ada cleared her throat, already feeling foolish. "A gift of gold for the faeries... I have come to make a wish."

The air was still, yet Ada found herself restless. She gripped the edge of the well as her words followed the coin and bounced down the stones. The alcove was too tight, the mud making each breath damp and heavy. She tried to turn her feet and leave, but she couldn't drag her eyes from the well. The darkness seemed to stare back, refusing to relinquish its hold as it pulled her closer, deeper.

Her senses sprang back to life when she heard a chorus sailing across the hillside. It sounded like the same group of musicians from the town, though their hollow voices came louder now, as if they were not streets away, but standing right behind her.

Ada ripped her eyes from the darkness and stumbled to face them. Yet only a starry sky awaited her on the hillside.

Still, the chorus hung in the air, swarming and separating as they repeated their song. It kept starting and ending in a hundred different voices, which slowly came together in strands as the song became a verse, that became a sentence, that became a word.

"Kavanagh," called the voices, the name ringing out like the peeling of a bell across the hillock.

"Show yourself!" cried Ada, staggering back into the alcove.

There were no figures in sight, but the calls still came, repeating her name again and again as they gradually composed themselves into a single voice. It chimed in the air, sifted through the grass, rumbled deep into the earth. "My, oh my! You certainly know how to take your time."

"Who's there?" Ada felt her legs start to give.

"Why, you called for us, did you not?" answered the voice. "Although I must admit, we did give you some guidance on your way up here. But to think that you would ask for a wish. How charmingly impudent you are."

"Stop this," said Ada, gathering her strength with the support of the well-stones. "It may be the equinox, but there is no need to play tricks."

"The fae may be known for their trickery, Adalyn Kavanagh, but I can assure you that this is not one of them."

Ada's mind threaded into a thousand thoughts that refused to weave together. She grasped for any sense of semblance, but they all seemed to be slipping from her fingers and tumbling into the depths of the well.

"You see, many moons ago, your grandmother made a deal with our kind," continued the voice. "A deal that left her with a debt your family has finally been called upon to repay. Although she could still feasibly requite our arrangement, I feel that younger blood may be more suited to our affairs."

"Don't you dare go near my grandmother," said Ada as the voice turned stoic and cold. In the distance, a wind began to gather.

"Then the deal is set and in your performance of a favour for the fae, your grandmother's agreement shall be completed. Your instructions are stated thusly; retrieve the name of the Saltsworn."

"The Saltsworn? I've never heard of such a thing," Ada said, her attention slipping for a moment at the strange words. "Where is it even to be found?"

Her final question was dashed away with a wind that trembled the bluebells around her feet. Ada turned and caught one last glimpse of the star-strewn sky before a great gust barrelled into her chest and she toppled backwards. Her boots left the ground and her back hit stone. A gasp left her mouth as the stars grew smaller and then flickered out completely, succumbing to the darkness in much the same way Ada did as she tumbled into the Wishing Well.

"The stars grew smaller and then flickered out completely, succumbing to the darkness in much the same way Ada did as she tumbled into the Wishing Well." 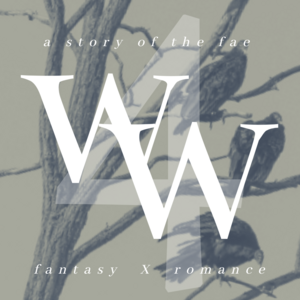