She couldn't breathe. The cold shock of water had sucked the air from Ada's lungs and now it clung to her skin, pressing her eyelids shut and filling her ears with a beating cascade.

But then, just as suddenly as it had started, it stopped. Ada was flung onto a pile of leaves and her boots sent up a cloud of dirt. There was a silence once again, but it did not feel as it had on Cresthill. Instead, it was as though there were spectators crowding around her, watching and waiting in a deafening hush.

Ada's eyes snapped open, the image of fading stars and a chorus of vacant voices slicing into her mind. But in place of the night's sky was a mass of trees, each with bulging branches that stretched upwards as if desperate to escape her sight.

Ada was sprawled in the arched opening of a tree trunk, completely hollow and as large as her grandmother's garden shed. Behind her was a pile of crumbling stones, stacked roughly into a ring. It was a well of sorts, but when Ada staggered to her feet and stared over its lip, she found it dropped only a few feet. At the bottom was a tuft of grass and a scattering of twigs, with no sign that even a puddle of water had ever been gathered there.

Her heart was thumping wildly as Ada grasped at the velvet of her cloak, and then at the tumbling locks of hair across her cheeks. Nothing was wet, though she was sure she hadn't imagined the deathly descent into water that had left her gasping for air only moments before.

Ada stumbled out of the hollow and gazed up at the canopy. The foliage above grew thick and gloomy, shifting together in shades of grey and murky green. From amongst their tattered edges, light was starting to leak through, as if the sun was hesitant as to whether it should rise. But it surely couldn't be morning already.

Ada pressed her fingertips against the bark of the wide tree, bending her head back as she tried to see how far it climbed. The twisting wood was familiar, though the bark was far darker than any she had seen before. Its leaves fluttered as they did in the forest by her grandmother's cottage, though their edges were jagged and uneven, as if someone had been grasping at the branches but ended up lacerating the foliage.

The more she stared, the more certain Ada became that she was standing in the midst of the Wystwood forest, its silent depths spiralling outwards in a mass of creeping shadows. But nothing was quite right; the trees were too grey and the ground was too ashen.

Uncertainty settled on the forest floor, a heavy blanket that muffled the thudding of her boots as Ada started to make her way through the trees. She knew that it wasn't the wisest choice and that she would be easier to find if she remained in one place, but the thick silence and stagnant air seemed to leave little choice. Wherever Ada had found herself, it was not somewhere that she intended to stay.

Her breath left her body in puffs as she pushed through the thicket, twigs snagging at her ribbons and thorns scratching bare skin. The faster she moved, the more impenetrable the woodland seemed to become. It sucked her back in, desperate to keep her within its grasp like a fox dragging its prey. But Ada was claws and fury as she crashed through the bracken and fell, with a sudden cry of bewilderment, out from the tree line and onto a dirt path.

The trail was narrow and shaded, for the trees here grew so closely that they formed an arch of branches, doming the path like the nave of a cathedral. Their trunks were the same dark shade as those that crowded around the well, but every so often, Ada could make out deep lines that were slashed into the wood. Sometimes they would appear in long, parallel sets as if someone had dragged their fingernails through the bark like butter. Collected at the base of each line was a dried substance that may have once been soupy and oozing, but now the resin had hardened like a deposit of shimmering gemstone.

Ada moved softly, the silence of the forest suddenly so much more sinister on the deserted trail than between the rustling trees. But then, tucked into a tight turn of the pathway, appeared a wooden post. Ada brushed away a mass of ivy that threatened to conceal the words carved into the sign. WYSTHAVEN was written in a curling script, followed by 1 MILE and a looping arrow that pointed further down the path. More words were carved below, but the ivy clung to the post with such a strength that, as Ada prised it from the sign, it pulled away splinters of wood and made the writing illegible.

Small stabs of panic started to pierce at Ada's heart as she stared at the post, for she had never before heard of a place named Wysthaven. What's more, Little Crestbury was miles from any other village, town, or city, and there was no known settlement that dwelled so closely to the Wystwood forest. Her breath came faster and faster as tears began to blur her vision, the letters on the post distorting and swirling together.

Ada's thoughts converged on darkness. Her mind was blank and it was all she could do to slow the swelling of her lungs as her palms pressed into her eye sockets. She focused on the soft touch of her skin and rising of her chest, unwittingly missing the rustle of a bird flock taking flight and the brief thud of boots hitting the ground with practised ease. It was not until the air was displaced around her feet and her cloak swirled forwards that Ada realised someone was standing right behind her.

She gasped, her hands flying out at the figure she sensed was a hairsbreadth from her back. But she didn't get a chance to escape as firm hands curved around her arms and jerked her body forwards, into the trunk of a tree. Bark scraped against her cheek and a low chuckle sliced through the air. Large boots held her own in place as rough fingers caught chin.

"Didn't anyone ever tell you that it's dangerous to wander around Wystwood alone?" murmured a voice.

The man shifted slightly, his chest brushing the fabric against her back as he moved to get a better look at her profile, careful to keep his face shrouded in shadows. Ada could just make out the strange form of his fingers, slightly too long, with too many bones shaping joints that shouldn't have been there. He traced them down the fragile skin of her neck with such a grace and precision that Ada was sure, were he to curl his hands more tightly, he could stop the air from reaching her lungs in a matter of moments.

He moved closer still, his lips almost tracing the shell of her ear with a breath that shivered across her skin in glacial threads. "You never know who might be waiting for you."

"Didn't anyone ever tell you that it's dangerous to wander around Wystwood alone?" 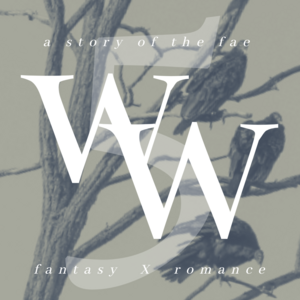