Slender fingers skated down the fabric of Ada's cloak, the pale flesh a stark contrast against its inky velvet. The man's hands travelled past her hip bones and stretched out to run across her thighs. She attempted another desperate shove with her shoulders, only for him to press her more forcefully into the tree, bruising her collar as he growled a warning in her ear.

Seemingly satisfied that she had nothing threatening strapped to her legs, the man's fingers moved to pluck back the fabric of her cloak, checking her waist and arms. Ada gasped a breath when the pressure on her back eased slightly and, able to turn her head once more, she prepared to thrust her elbow back into his stomach. But before she could move, his long fingers had flickered to the pocket of her cloak and pulled out a squared piece of paper.

"Smuggling messages into the city, are we?" The deep crooning of his voice retreated several feet away. "You could get into all kinds of trouble for that."

Ada lurched around to face him, but her attention was immediately drawn to the creamy slip of paper in his hand. A letter, she realised, as her eyes followed her grandmother's looping handwriting, spelling out her name. It was true that her evening had been somewhat unusual, but Ada grimaced to think that she had missed the note Rosamund must have slipped into her gift's pocket.

"Return that immediately," snarled Ada, hot fury glazing the steady dread that sung through her bones.

His narrow fingers edged along the length of the letter, before finally pinching together at its corner. It dangled precariously in the otherwise still air.

"I don't think you're in any position to be making demands here," came the man's reply as he moved closer, every step a measured beat as he prowled from the shadows.

He was unnervingly tall, with sharp bones that angled the pointed joints beneath his skin. His ears were long and tapered up, matching his face in their fair and deathly pallor. Slight hollows carved his cheeks in, though they disappeared under a strip of black wool that he had fashioned into a mask. It stretched from one side of his face to the other, concealing the tip of his nose and hanging down past his chin.

Ada's heels collided with a tree as she stumbled backwards. Her knuckles knocked against bark and her fingertips found a short branch of wystwood. She shifted, steadied her breathing, and the branch snapped softly off in her hand.

"And why should I listen to the threats of a common thief?" she spat, meeting his eyes with what she hoped was a level and defiant gaze.

His brow furrowed, and Ada could picture the sneer that was settling on his lips. With a flick of his fingers, the man tore open a fraction of the letter.

"Stop!" cried Ada, wild-eyed as the stirring of the paper sent ripples across her delicately inked name.

She vaulted forwards, branch raised and legs charging. But before she had moved even a metre from the tree, he leapt at her with lithe limbs that once again trapped her against the wystwood's trunk.

This time the man's face was etched in animosity, his arm exerting such a pressure against her shoulder that she dropped the branch with a whimper. The knuckles of his other hand were ghost-white as his fingers curled around the dagger he now held against her throat. Its blade was short, matching the hilt's rich dark colour. Peculiarly, it did not have the cold bite that Ada expected from a forged weapon. It felt almost warm against her skin, like a lover's kiss on their death bed.

The man eased the dagger from her throat as Ada stood petrified, tracing the blade across the tender skin of her jaw, past her neck, down towards her heaving chest. Staring at the knife, she realised that it was not made of metal at all. Rather, the dagger was marked with the polished whorls of carved wood, black as ebony. The man didn't seem bothered by the strange blade at all though as he sketched a circle just below her collarbone.

"With this dagger, all I would have to do is press down, ever so softly." The tip of his blade caught the collar of Ada's dress and she flinched against him. "It would slice through your skin and sinew and carve the heart from your chest, still beating, before I held it before you while you struggled for breath. The pain would be so intense that you would beg me for death, but I would condemn you to live out your days without a heart and near-mindless from the torment of it."

Ada choked, ripping her eyes away from the patterns his fingers were charting. "That's not possible."

His head cocked to the side, brows knitting together in an expression akin to vague confusion. But as he met her gaze she found his eyes were dark and empty, pupils blown large and spilling out into irises flecked with obsidian. Then, sudden and startling, he was staring at her with a mirrored expression of horror. His fingers caught her chin, wrenching her face into the little available light as he mapped every stretch of her skin.

"You can't be..." he breathed, more to himself than to Ada as his arms fell stiffly to his sides.

It was all Ada needed, and she launched her palms into the centre of his broad chest, clawing against sheaths of leather and straps of animal hide. With grasping fingertips, she tore the dagger from the man's hold as he stumbled back and, bracing her arms against the tree trunk, Ada lifted her boot from the ground and pistoned it into his stomach.

The man lost his balance, eyes meeting hers in vivid disbelief. But there was something else too, something that swam in his pupils and lay poised on the lips he hid under the strip of black fabric. But then his arms were wheeling through the air and he careened across the path, the soles of his boots catching in the undergrowth as he fell into the bushes. Ada caught a glimpse of her letter, tucked into his shirt sleeve, before his torso vanished into the shadows of the wystwood trees.

There was a snap as he collided with the forest floor, but the sounds faded into the distance as Ada took off in a sprint. She flew past the sign pointing towards Wysthaven on wings woven from horror and haste. The air rushed past her ears as her heart beat in time with the words chanting in her mind. They came in the voice of her grandmother, the elderly woman almost drowning out the terror as she told her to keep running. Keep running and never slow down.

"She told her to keep running. Keep running and never slow down." 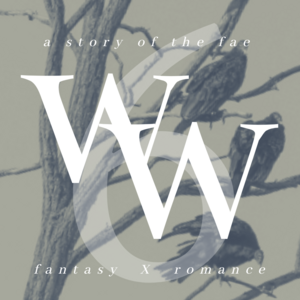