In between heartbeats, reality was bent and boundless. Ada sat in her plain dress and fraying ribbons, her body unchanged but her thoughts a world away. It was the wind that finally lifted her up, seizing her limbs and binding her mind before she could think to pull away. She was a bird without wings as she stumbled down the hillside, the Wystwood receding at her back. For a moment, the sun caught in her eyes and left spots that spun and separated her vision. But when they finally cleared, the valley was laid bare before her.

Sprawling across the lowland was a vast city. The immensity of it seemed too large for the valley itself, and Ada expected it to suddenly flicker out of existence like a mirage or trick of the light. Yet there it remained, caught somewhere between mortar and ivy as each building spread outwards like ripples on a verdant pond. A grand wall spanned around the city, broken only at the points where four separate paths met four separate archways. They were not imposing as the bone arch had been, but rather built from a smoothed grey stone that was faded in the soft manner often brought about by years of rainy summertimes.

From city squares wound streets that were strewn across the city like lacings of thread. They meandered past doorways and around fountains, occasionally meeting back up with themselves or separating off into cul-de-sacs. The roads curved to trace the bodies of two concentric canals, each running in a stagnant circle and tinged green by webbings of algae. At the very centre of the cobbled maze was a tower, alone in its magnitude and ringed by the smallest canal as it pierced up into the sky. Were it not built within the depths of the valley, clouds could have caught on its spire and woven a veil of vapour to shroud its glassless windows.

Large rocks shrunk into sprays of pebbles as Ada followed a path down towards the phantasmal city. Dandelions sprung to the sides of her boots, and a stream shimmered on the opposite side of the valley, catching the morning sun like a salmon darting downstream. Ada lost sight of it as she approached the great wall and a stout archway that led into the city itself. The grass had tentatively given way to cobblestone, which spread onwards between houses with tightly curtained windows. Morning was only just blossoming, and the streets were empty.

In the silence of dawn, Ada approached the city entrance and then stopped. She stood within the in-between space, not yet through the archway but close enough to gaze up at the houses that had seemed so small from upon the hillside. A bead of water tumbled from the heavens and burst against Ada's forehead. The grey underside of the arch was slightly darkened, as if still stained from a previous night's rainfall. Though it wasn't this that caught Ada's attention, but the script carved onto the stonework. It matched the bone arch's engraving, soft and worn, as if centuries of eyes gazing on the archway had faded the single word etched there: WYSTHAVEN.

With a breath held inside her lungs, Ada stepped through the archway and into the city.

"Gold coin for a fortune, young miss?" A voice grated against the still morning air.

Ada cried out, hand flying to her pocketed dagger as she spun on her heel. But her fingers loosened at the sight of a gaunt woman slumped against the city wall behind her. She was dressed in tattered rags, almost disappearing into the stone's moss were it not for her bony fingers which worried together in curious shapes.

"A piece of gold and the touch of your hand. Give me these things and I can unwind the tapestry of your days yet to come," the woman replied, her voice crackling as if she had not used it in a long while.

The beggar woman shifted, her thin hands tightening until it seemed her skin would rip across her knuckles. Pale sunlight slipped over the rooftops as she lifted her head. Her face was lined with age, every wrinkle merging into the next like cracks in dried out clay. She seemed to be staring at Ada, though she could not tell for certain as the woman had no eyes. In their place were deep gashes of red and indigo; a bouquet of roses and violets forever in bloom across her skin. At the sight of the blistered flesh, Ada stumbled away, her back slamming into a doorpost. The elderly woman remained silent.

A cloud drifted across the sky, casting a shadow over the pair before the eyeless woman finally stretched out a hand and said, "You need not hold fear for me, young lady. You must have travelled a great distance to be here. Come to me and I shall not charge for my telling, for the wind has whispered of you."

Ada's heart thudded against her ribcage and she resisted the urge to slip up her hood and dart into one of the side streets. But there was something intriguing about the mysterious woman. She held on her face a penetrating expression that transcended her eyeless gaze.

Her boots scuffed across the cobbles as Ada made her way towards the beggar, who caught her hand with startling strength. Coarse fingertips ran across her palm, and by the time that violent shudders began to rack through the elderly woman's body, it was too late to pull away.

"The city was caught somewhere between mortar and ivy as each building spread outwards like ripples on a verdant pond." 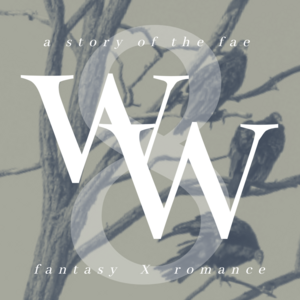