The day wore on with drifting clouds and watery sunlight. Long shadows drew across the caravan, fading its bright yellow to a mottled brown. Were it not for the caravan's small windows, Ada wouldn't have been able to peer out at the market. The crowds had already begun to die down past noon, heeled boots tapping across the cobblestones as hastily tied scarves dragged through the dust. The chimney smoke took on a different shade, turning thick and grey as families started to roast red meats for their evening meals.

The caravan hadn't been built with a chimney, but a wide pewter pot was set into its centre, which Min was now filling with water. She held onto a kettle with determined strength, despite it being the size of her torso. She had refused all of Ada's offers of help, even when boiling water had missed the pot and sloshed a little too close to her toes.

The kettle hung on a low stand, and three twisted legs suspended it above a candle and wick that had long since melted down to a bulbous lump. Though the contraption looked almost normal compared to the rest of the caravan. Bunches of dried flowers hung from the ceiling, occasionally dropping petals onto the herbs stuffed into the indoor window boxes. Small trees bulged from pots next to bookcases, and their creepers trailed down onto the floor, which Ada had to take care not to continually tread on.

Min let the kettle's handle catch the stand with a clang, and it swung back and forth as she stuffed a handful of nettles into the pot. Poking the leaves down with a spoon, she turned back to Ada.

"Wait, wait," said Ada, whose stool creaked under her as if it may give way at any moment. Even though her head was fuzzy with exhaustion, questions continued to fall from her lips. "So the man in the alleyway was a—"

"Hound," finished Min, nose wrinkling as hot pewter scalded her fingertips. "They work for the Lady of Wysthaven and guard the city. Although they're more like spies than guards, watching out every second for any sign of magic they can tell her about. People say her punishments are worse than anything you could ever, ever imagine. Some don't even make it past her tower doors."

"The whole tower's built with iron. Stories say only those who can bear to live inside its walls are fit to rule it."

"And iron is damaging to you... to..." The word felt dangerous on her tongue, as though to speak it would finally make it true. "Fae?"

Min nodded vigorously, her tangled hair bouncing away from her face—an easy question at last.

Ada buried her head in her hands. It was all too overwhelming, like falling head first back into the Wishing Well, but no longer being able to surface. Each breath dragged in more water, each moment it was harder to think.

The question was more to herself than to Min, but the child replied anyway. "I don't know. The wind never told me that."

Ada lifted her eyes. "But it told you my name?"

Min nodded again, eager eyes flashing in the candlelight. Her spoon fell into the nettle soup with a splash and she darted around the pot. Clearing a space on the floorboards, she sat down, cross-legged, and closed her eyes.

For a moment, nothing happened. The curtains fluttered in the evening air and steam from the pot spiralled up around them. But then the curtains started to bundle together, and the steam wisped around the room and picked up scraps of paper, all caught in a wind that was seeping through the windows and beneath the doorframe.

Ada felt the wind around the ankles, slipping past her like a stream that ran only towards Min. The child's hair was fluttering against her head, her smock floating around her legs. But all Ada could hear was the rustle of curtains and the pot's candle spluttering out. A smile curled the corner of Min's lips, and then the air fell still once again.

Ada ran a hand over the goosebumps on her arms and shuddered. The silence had brought a new sickness to her stomach, and whatever had just happened in the caravan, Ada suddenly thought she shouldn't have witnessed it. It felt unnatural, a wrongness in a world that she couldn't quite comprehend.

"No, I didn't hear it," Ada finally said. "And I don't understand what you're trying to tell me about your world and its people and the wind. If this is all just a nasty trick, then well done, you fooled me. But if it's not, then I'm sorry, but I didn't come here to find you, or to help you. I just want to go home."

"It's not a trick!" replied Min with a scowl. "And it spoke clear as anything! Adalyn Kava—"

Suddenly, the caravan steps groaned and Min flinched then fell silent. The door creaked open, stiff hinges protesting as Florentin slipped inside. His eyes lingered on Ada as he entered, as if hoping she may merge into the shadows and flicker away under the candlelight. But then he turned to his daughter, and saw her mussed hair and ruffled dress. His armful of flowers fell onto a dresser with a thud. "What did you ask the wind?"

"I was just asking Adalyn's name again. To show her," Min mumbled.

"That's wiser to use here anyway," the man said, stepping into the light to check on Min's soup. All the while he avoided Ada's gaze, and she thought better than to ask him to continue.

But Min hopped onto the counter, gladly supplying in his place, "You mustn't ever share your full name with anyone unless you absolutely trust them more than anyone else in the whole wide world. Some people die without barely anyone knowing. Right, Papa?"

Her father only grunted in reply, heaving the pewter pot up next to his daughter and reaching for a cupboard. It was stacked to the brim with chipped plates and teacups, which threatened to topple onto his head as he removed three of each.

Min continued, "You have a lot of power if you know someone's name. You can make them do things. Anything you want, really. They'd throw their friend to their death if you ordered them to with their name."

Ada shivered. "Iron, names... Lady of Wysthaven. Is there anything else to add to this mayhem."

Min pursed her lips thoughtfully. Beside her swinging feet, Florentin ladled out three bowls of soup, and the scent of wild garlic wafted around the caravan.

"Pacts," Min settled on, her eyes brighter than the candlelight. "You must never, ever trust us fae with a dealing."

"You must never, ever trust the fae with a dealing." 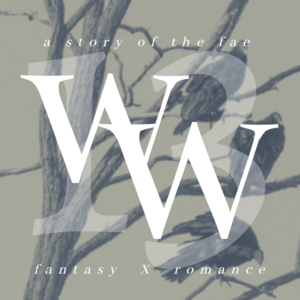