Florentin left at sunrise, and Ada startled awake as the door clattered shut by her feet. She had barely enough time to rub her puffy eyes before Min was up and drawing back the caravan's mismatched curtains.

Min set about making breakfast, sticking oat biscuits with marmalade and boiling up the remaining nettles into a watery tea. The oats were stale, though Ada hardly cared, gulping down the earthy tea to wash away its dryness. Sleep had made her hungry, which Min seemed to notice, the girl piling as many biscuits onto Ada's plate as she dropped lumps of sugar into her teacup.

As streaks of sunlight slanted through the windows, Florentin's footsteps returned. He wasn't alone, the steady beat of hooves keeping time with his paces. Min dashed to the door and hurried down the steps, her shoelaces untied and trailing as she flung her arms around a large chestnut horse.

Ada lingered by the door, watching Min rub her cheek into the horse's mangy coat as Florentin wrapped a bridle around its neck. She draped her cloak around her shoulders against the morning chill, drawing up its hood as she looked out across the marketplace.

A few people drifted across the square, one woman gathering together her woven skirts as she stooped for a crate of apples. Nobody paid any mind to Min or the horse, simply going about their business as they wrapped up books in brown paper or tied vegetables into sets with string. A selection of stands had goods laid out to be sold later that morning, but there were far fewer people than Ada had seen the day before.

She was brought back to the soft thuds of leather and horse hooves by Min's voice. "Ada can come with us, can't she, Papa?"

Florentin looked up at Ada, his expression thankfully lacking his discomfort from the previous night. "She may travel with us if she wishes, but she has no place within our home tonight."

"No buts," Florentin interrupted, his eyes flickering to Ada's before continuing. "Our debt was paid to her when she accepted my deal to stay for the night. I shall offer her passage across the city as the Hound you met may still be close, but that is all."

He spoke of his offer to help her like a business arrangement; a formula of exchange rather than an act of kindness. Min quieted at his words, a sour pout curling her lips as she turned her attention back to the horse.

Florentin sighed, reaching into his pocket and fishing around before saying, "Be grateful, Min. We're walking on the edge of a precipice as it is. How long will it be before the Hounds lose their patience with us? Especially if you insist on hiding half the Fair Powder under your pillow instead of taking it all as I ask."

In his palm was the squashed canvas pouch. Min refused to look at him, turning her back to Florentin as he frowned and returned the bag to his pocket. He went back to the horse as Min stalked towards the caravan, nudging past Ada as she clambered inside. Min slumped to the floor, landing on a cushion which let out a puff of dust. She glared at her shoes, then huffed as she tied her laces together in knots. Ada felt as though she was watching her own younger sister, who had never been able to braid her own hair, let alone weave them with ribbons.

The sweet scent of marmalade drifted around the room as Ada walked towards Min, letting her hood fall back as she crouched down. Gently taking up the child's shoelaces, she began to undo her knots and retie them with bows. Min let her hands fall back, her scowl melting away as she watched Ada work.

"Can I ask what that powder was?" Ada said, tying her first bow with a double knot so that the girl's shoes wouldn't slip off.

"The Fair Powder? Papa buys it off of Ms Armestrong. It's supposed to help to hide magic. Makes it more difficult for you to Cast after you take the powder, so it's easier to pretend you aren't gifted with it." Min paused to pick at the rough wood by her legs. "But I don't like taking it—I want to be able to have my magic no matter what."

Ada thought of the man they had faced in the alleyway, who had been prepared to use violence against a child who was defenceless against him. She could suddenly understand Florentin's reaction the night before, faintly wondering what it must cost him to try and keep his daughter out of harm's way. But, instead, she asked, "Does it... What's it like? Taking it I mean. It looked like it hurt you last time."

Min met her gaze, her fingers pausing their patterns across the floorboards. Then she giggled. "Nobody's ever asked me that before." Tangled hair brushed Min's cheeks when she shook her head. "It's the worst feeling in the world. Like burning, but from the inside out."

The caravan door burst open, frail wood cracking against the wall as Florentin looked around, wild-eyed. He almost stepped on Ada as he stumbled over to Min, holding out a cutting of calendula. Its petals were as bright as a bonfire, and a slightly bitter scent cut through the mellow fragrance of marmalade.

"Healing, Minvelle. Quickly!" Florentin said, his words rough despite his whispering. He glanced at Ada, eyes stormy, and she retreated to the kitchen table. Whatever they were doing, her presence wasn't welcome.

But before she had turned back to the pair, Ada heard Florentin's boots pounding down the stairs, and saw the tail of his untucked shirt whip through the door frame. Min shuffled to her feet, and standing on her tiptoes, peered out of a window onto the marketplace.

Ada followed, crouching down behind her and searching for Florentin. He stood in the shadow of the caravan, which shaded both his face and the man to whom he was giving the wrapped up calendula. The stranger looked even more agitated than Florentin, violet skin drooping under his eyes as if he had not slept for several days. His shock of ginger hair had been swept back with a combination of sweat and grease, and even from a distance, Ada could see his fingers trembling as he shoved a couple of gold coins into Florentin's hand.

They parted without exchanging a single word. The man kept close to the houses that fringed the marketplace as he left, then staggered down a side street and out of view. Florentin hurried back up the caravan steps, reaching down to pull out the peg holding the stairs to the cobblestones. He shut the door and slid back the latch, then darted to the far end of the caravan and wrenched open a slat of painted wood.

He fumbled one hand through the opening and drew the horse reins through. Taking hold of the peeling leather, he called out to the horse with a flick of his wrists. There was a jolt, and then the wheels began to turn, the caravan moving through the square and into the city beyond.

"I want to be able to have my magic no matter what." 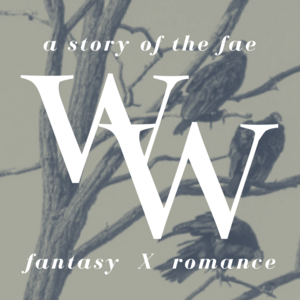