She watched with fascination as Julia tied her hair up exposing her smooth bronze neck. Her eyes transfixed on how the muscles moved when she talked. Blinking as she realised she had been staring and quickly looking away from her neck as she focused on what Julia had demonstrated to her just moments ago. Her cheeks felt warm; she hoped that the blonde woman had not noticed at all.

What Julia had shown her just now was not complicated but she struggled to keep it all in her head. It reminded her of the ritual casting classes she had taken when she was attending a wizarding school in High Haven almost two decades ago. She had a vague memory of her old tutor, Hermia trying to teach her this, but in the end she had found it easier to use her voice and music to cast. She knew that if she could learn it in this way then it would expand her magical repertoire beyond just bardic spells, but it felt almost impossible as she sat on the hardwood floor of Julia’s flat. She had not been in this room for over four years and she was beginning to wonder if there was too much distraction here for her to concentrate.

Shaking her head, she re-focused on what was before her, something soft brushed past her before hopping into her lap. She looked down to see a familiar one eyed tabby cat nuzzling into her.

"Hello Schrödinger." She murmured. He softly mewed at her in return as she scratched behind his ear. "Aren't you the cutest."

A soft clicking noise came from Julia and the ginger cat leaped off her lap and walked over to her. "Now is not the time to play with Eliza mummy." Picking him up, she cradled the small creature and walked to the bedroom. Eliza could hear her talking to Schrödinger and the other cats as she gently closed the bedroom door.

Julia returned and kneeled on the floor in front of her, her muscles tensed momentarily before relaxing as she found herself a comfortable position. A pang of desire ran through Eliza as she took in her appearance, Julia's physique was no less statuesque than she remembered. Her long golden hair framed her elegant face, her features were hard but beautiful, like a statue of a goddess, and she was tall and powerfully built to complete the image. Eliza had missed her.

She snapped back, reminding herself to focus. It wasn't good for her to take up Julia's time like this; especially when she had pressing work to do. She rubbed the back of her neck as she felt self-conscious under her tutor’s intense gaze. Maybe this was a bad idea. She chewed on her bottom lip nervously, her gaze moving downward to see the chalk and components laid before her. Julia’s spell book was laid open on the floor and the spell she was attempting to learn taunted her. It was kind of Julia to have lent her not only her book but also the resources to learn multiple spells. She felt the tall wizard touch her knee, breaking her train of thought, her expression was stoic but there was a softness to it.

"Shall I take you through it again, Eliza?"

"If you have the time to, I'd appreciate it..." Eliza trailed off, feeling nervous. "I seem to be struggling a little."

"That's understandable, your bardic magic relies on intuition and rhythm. We wizards rely on precision, methodology and memorisation to cast.” Julia paused to take a breath before continuing in her soft voice. “What might help is if you show me how you'd normally cast a spell. Identify, perhaps?" Julia removed the ring on her pinky and placed it on the floor before her.

"Oh, okay." Eliza lit the candle and picked up the small piece of green sea glass to look at the burning candle through it. Her empty hand created a gentle rhythm on her thigh, once the beat was set she sung a soft melody the air suddenly thick with magic and the flame of the candle growing in intensity, reacting to the tone of her voice. The intensity of the flame increased as she reached the end before it suddenly softened, the candle going out and the smoke told her the secrets of the ring before her. The room was silent and still, the hum of magic still in the air. Eliza had already known the nature of the ring before casting the spell, but the ritual whispered to her, refreshing what she already knew. It allowed the wearer to change their presenting gender on a command word and their clothing magically reformed to fit their new figure. Something Julia had made for herself when she experienced intense dysmorphia with her body. She could feel her magic reserves had dwindled from casting even such a simple spell.

She looked across at Julia and blushed from both her exertion and the attention as she noticed her intense gaze, she failed to notice the tips of the wizard’s pointed ears flush. Julia licked her lips as she cleared her throat.

"Thank you for the demonstration. May I ask if you cast the spell in a similar manner every time?"

"No, it generally varies. As long as I remain in tune and to the beat I've set then I’m able to cast it."

"I see, so the key difference between how a bard and wizard would perform the same spell, is consistency. I know this is not how you're used to casting but if you do not wish to expend your magical energies, you will need to learn to cast it exactly as a wizard would cast.” Julia looked away from her momentarily, as she pushed some loose strands of hair behind her pointed ears. “Think of it as if you were performing a set on stage. You need to memorise the choreography and lines. Does that make sense?" Eliza nodded her head and made a noise of agreement.

"I understand what you mean; essentially to cast the spell and not use up my magical energies, I would need to cast the spell like a wizard. I guess to learn it like a new act, which includes various elements a performer would have to memorise for the stage?" The edge of Julia's lips curved as Eliza arrived at the answer on her own, she enthusiastically nodded and tapped the tips off her fingers together in excitement, just enough to make the a soft pattering sound due to her sensitivity to loud noises, but enough to convey that she was proud.

"Yes, that's exactly it!" She paused as she brought her clasped hands to her lips before she moved them away as if praying, her fingers spread.

"If you spend time learning each part before bringing them together as a whole I'm sure you'll be able to achieve the same goal. Shall I take you through each individual task for casting the identify ritual?"

"Please, that sounds wonderful if you could." Julia nodded at her as she started demonstrating the pattern she needed to mimic, followed by the nonsensical words that formed the spell. The act of drawing the symbols replaced the element of movement from the bardic version of the spell, which would normally have been created by her hand-tapped rhythm. Julia stayed through her first attempt, encouraged her on the technique and corrected her pronunciation.

"If you keep practising you'll be able to learn this spell within the day or two." Said Julia, with quiet excitement. Eliza smiled as she basked in the praise.

"Thank you, I think I can manage on my own from here."

"All right, I'll leave you to it. I'll be in my office if you need anything. You already know the way around, so just make yourself comfortable." Julia tapped her knee as she got up, her hand lingered on her shoulder before she went downstairs to her study.

Author note: Welcome new readers, I'd thought I'd call out that this story will contain a few trans characters as well as autistic rep. This will primarily be a wlw story and will explore themes of gender.

What’s your favourite D&D spell? Mine is prestidigitation. So good for daily chores.

Credits: props to my amazing editor and fiancé Kate!

I need the upgraded version of that ring. 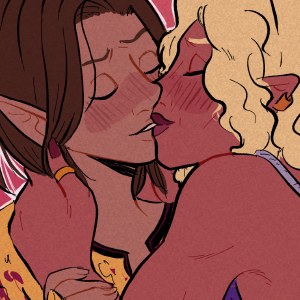